The first of three concerts by the London Symphony Orchestra had not merely a festive air about it but also a sense of great anticipation – a renowned British orchestra was returning to New York with Bernard Haitink, a revered elder statesman and Mahlerian of distinction, at its helm.

Schubert’s Fifth Symphony is a sunny work, full of lyricism and charm, written for strings, a flute and pairs of oboes, bassoons and horns. Bernard Haitink opted for an inappropriately large string section, almost 40 players. As beautiful as the sound was, it felt much too heavy for this essentially small-scale piece, a Brahmsian sonority which obscured clarity of texture, relegating the winds to a subordinate role, the symphony’s Romantic elements emphasized at the expense of its intrinsic classicism.

In the Andante con moto, the emphasis was on ‘con moto’. If a sense of repose is maintained, long lines are drawn, this could be a valid approach. Haitink, however, far too often undermined the movement’s tranquility by delineating the smallest rhythmic units and opting for short phrases; and when spirit and wit was required in the finale, they were glossed over in favor of a generalized genteel sound.

This tendency towards under-characterization unfortunately carried over into the Mahler. More than any of his contemporaries Mahler marked his scores quite precisely, including tempo variations. Haitink often ignored these and thereby obscured the work’s structure. Whereas Pierre Boulez, for instance, will often throw a composition into high relief by meticulous attention to detail, here we were treated to the opposite approach as Haitink eschewed contrast and drama. Moreover, especially in the first movement, his tempos were very deliberate, and when this is combined with slack tension it makes for a very long evening.

Since Gordan Nikolitch has a very emphatic style of leadership, even distractingly so, one expected a high profile solo in the second movement. Mahler marks the scorditura violin (tuned one tone higher) to be played “like a fiddle”, and the melody keeps twanging on an F sharp, which in this tuning is an open string. Nikolitch played the part in high positions, with vibrato, avoiding open strings; while he produced an unusual sound, nasal and anaemic, one missed the stridency of a true “Fiedler” – as well as any poignancy and characterization in Haitink’s concept of the movement. 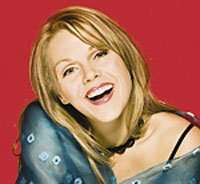 Soprano Miah Persson then joined the orchestra and was greeted by applause! As if this wasn’t disruption enough, the house lights were turned on. This led much of the audience to noisily leaf through programs, searching for the song texts, during what should have been the most serene moment of the evening, the beginning of the Adagio. But even this added ‘percussion’ aside, the sound wasn’t quite right – too much melody line, not enough balancing cello choir, and altogether far too present. This long movement requires exquisite control of structure and color, and again Haitink disappointed by merely plodding along without any discernable underlying tension or direction.

The soprano solo in the finale should have added some dramatic intensity, but this too was not to be. Short on expression and singing in a restrained manner, Persson perhaps attempted to evoke the innocence of a child. Merely scaling down one’s sound though doesn’t quite give this effect, and in the slow phrases one sorely missed the floating high pianissimos of a Montserrat Caballé. Only when she opened up at “Sankt Ursula…” did we get a taste of the beauty of Persson’s voice. Overall this was a very disappointing Mahler 4, featureless and lacking in energy, redeemed only by the LSO’s beautiful string sound, warm and rich even in this acoustically problematic auditorium.