A short overture, an appetiser, would have been nice. Instead we went ‘cold’ into the concerto: very unsatisfactory if today quite the regrettable norm. And how nice it would have been to have heard one of Max Bruch’s other two violin concertos or his wonderful Scottish Fantasy, let alone the four-movement Serenade, instead of the ubiquitous First. 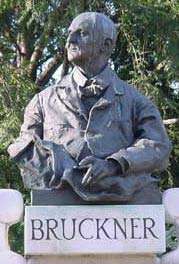 Another gripe – the presentation of Bruckner 7 in the programme-book was shoddy. We were informed that Daniel Harding would conduct Leopold Nowak’s edition. He opted (surely?) for Robert Haas’s. Furthermore the order of the middle movements as advised was transposed, a glitch supported by Andrew Huth’s written note, tacitly if misleadingly implying that the movement-order was a consequence of Nowak’s editing; and also failing to mention anything about the problematical percussion at the Adagio’s climax – which really should be an essential inclusion when writing about this symphony. What the LSO had done was to blindly reprint the essay that accompanied Colin Davis’s conducting of this work on 23 May 2008 that allowed for Sir Colin’s entirely personal (if quirky) decision to reverse the order of the middle movements – but failing to explain that this is solely Davis’s choice and nothing whatsoever to do with Bruckner or any of his editors. Therefore, for Harding’s performance the note was even less helpful.

In a nutshell, it seems that Bruckner 7’s first conductor, Arthur Nikisch, was persuaded (probably by the Schalk brothers, Bruckner’s pupils who made alterations and cuts to the composer’s music often without his agreement or knowledge) that a cymbal clash at the slow movement’s climax would be of benefit, which Nikisch went along with. Bruckner seems to have been less convinced. Anyway, it’s a longer story than this, but Haas omits all percussion at this point whereas Nowak includes cymbals, triangle and timpani. To his credit, Harding went with Haas.

Otherwise it was a performance that never really penetrated to the soul of the music. Harding kept all four movements on the move, sometimes hectically (outer movements) and restlessly (Adagio, the serene Moderato episode not expansive enough), a sort-of Classical conception that fluctuated enough to sometimes lose the line (Haas, sparing with tempo changes, would have protested, Nowak might have been more approving). Yet there were Nowakian aspects along the way, so maybe we had his edition minus the percussion? Although there was plenty of incident – the score very closely observed by Harding, thoroughly prepared and superbly played – rarely did the music take wing and involve, although it wasn’t earthbound either. Dynamic variety tended to be subito rather than graduated and there was not enough light and shade. Although the use of antiphonal violins was welcome, and is de rigueur for this music, and nine (left-positioned) double basses offered a good hefty foundation, the real stumbling block was the over-loudness of the brass, unnecessarily supplemented by an extra trumpet and trombone, which dominated at times and added irritable edge to the tuttis – thus, when the real climaxes arrived there was nowhere to go.

Best of all was the rampaging scherzo, played with incision and ‘modern’ power, yet although Harding’s attempt at a related tempo-relationship for the trio was laudable there was also an element of pouring a quart of expression into a pint pot. In short, this vivid performance rarely trod hallowed ground, although there was a certain (and convincing) equilibrium of the symphony playing here for a nicely circular hour (movement-timings of 20, 20, 10 and 10 minutes were also statistically credible). Yet such a concentrated approach comes off better if less pressured (Michael Gielen, for example) or given with a sense of whimsy (Roger Norrington), a twinkle-in-the-eye slant rather than an unyieldingly intense one.

For all its over-familiarity – and the LSO has it programmed again in a few months’ time – Bruch’s Violin Concerto No.1 (quite often these days referred to as “Bruch’s Violin Concerto” – either in ignorance or denial of the other two, both fine pieces), this actually-great work emerged here afresh. Renaud Capuçon may play his violin in a somewhat ‘stiff’ way, almost military in stance and address, but the ear gratefully received his impassioned and very expressive performance, one without exaggerated phrasing or pressured tone. Indeed his fiery, emotional and sensitive rendition was a tonic and immeasurably helped by an accompaniment that enveloped and complemented the soloist’s precisely measured technique and his very musical and engaging accomplishment, Harding teasing out detail (Joseph Sanders’s contribution on oboe was consistently telling) and encouraging a lively response from the LSO – ardent in the first movement, hushed in the Adagio, and energetic in the finale, the latter driven along but with something left in both temperament and tempo to bring the concerto to an uplifting conclusion.

This was the LSO’s closing concert of its current Barbican Centre season, and also the last concert for one of the orchestra’s violinists, Stephen Rowlinson – to whom all best wishes on his retirement.