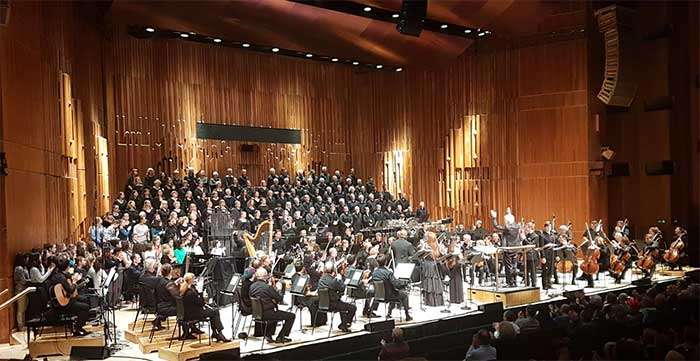 John Adams was inspired by childhood memories of Messiah performances to compose his own Christmas oratorio, El Niño (The Boy). It was commissioned for the millennium, Adams and his long-term collaborator Peter Sellars putting together a libretto that reflected “the roughness and the toughness and the difficulty of life” using the perspective and voices of women, notably the poetry of Rosario Castellanos, which for Adams provided the “soul of the piece”. The many sources for El Niño are exotic, historic and mythical.

This El Niño was shorn of the Sellars-devised film, projection and dance sequences, which have received a mixed reception. The expansive, layered drama of the music proved quite substantial enough in this performance conducted by the composer with electric precision and from an LSO on superb form.

The opening chorus ‘I sing of a maiden’ is based on a medieval lyric and impresses with contrasted textures of plucked strings and staccato brass with fluid guitar and harp on top. Repetitive choral figures, reminiscent of Adams’s Harmonium, emphasises the purity of Mary, the mother of God, to the accompaniment of celesta and bells. The effect is persuasive and magical. An angelic trio of countertenors, led by Daniel Bubeck, added an effective and otherworldly timbre to the Annunciation section; they also made an appearance as the Three Wise Men.

The significant roles in the oratorio are for soprano, as Mary, mezzo-soprano, an every woman, and the bass-baritone who has to encompass the puzzlement of Joseph and the evil expediency of Herod. Joélle Harvey, Jennifer Johnson Cano and Davóne Tines acquitted themselves beautifully. Harvey’s purity of tone and expressive innocence were touching in the extreme, particularly in the early passage replying to Joseph “I see two peoples with my eyes now, the one weeping and mourning, the other rejoicing and glad”. Adams illuminates this archetypal story at the most human level. Tines’s flexible baritone reached great depths as Joseph, particularly in the sections from Isaiah and Martin Luther’s Christmas sermon, which expressed the complexity of his feelings, even possible jealousy, at Mary’s pregnancy.

The poetry of the mystical Spanish texts by Sor Juana Inez de la Cruz was conveyed with a sweet delicacy by Cano. The Spanish of the London Symphony Chorus was not quite as distinct and although surtitles were adequate a full libretto in the programme would have been very useful to decode the texts in all their subtlety. The final sections of El Niño come from the Apocrypha: ‘Jesus and the Dragons’ and ‘A Palm Tree’ are allegorical tales which blended with Castellanos’s words. A children’s choir sang over the baritone’s vision of the tree reaching to Heaven. Adams’s complex layering of rhythm, exposing the extremes of human experience, faded to a simple folk-like melody for voice and guitar, the repeated word “Poesia”.