As with the LSO‘s previous Schumann-based concert conducted by Sir John Eliot Gardiner, the encore was as then, Mendelssohn’s Midsummer Night’s Dream ‘Scherzo’, a neat bit of cap-doffing between the two composers as well as a nod back to 2016 when the same forces had celebrated Mendelssohn so brilliantly.

This concert had originally been programmed as all-Schumann, with Piotr Anderszewski playing the Piano Concerto, but for whatever reason he changed to Beethoven’s First, which, like Schumann’s ‘Spring’ Symphony is young, or youngish man’s music. 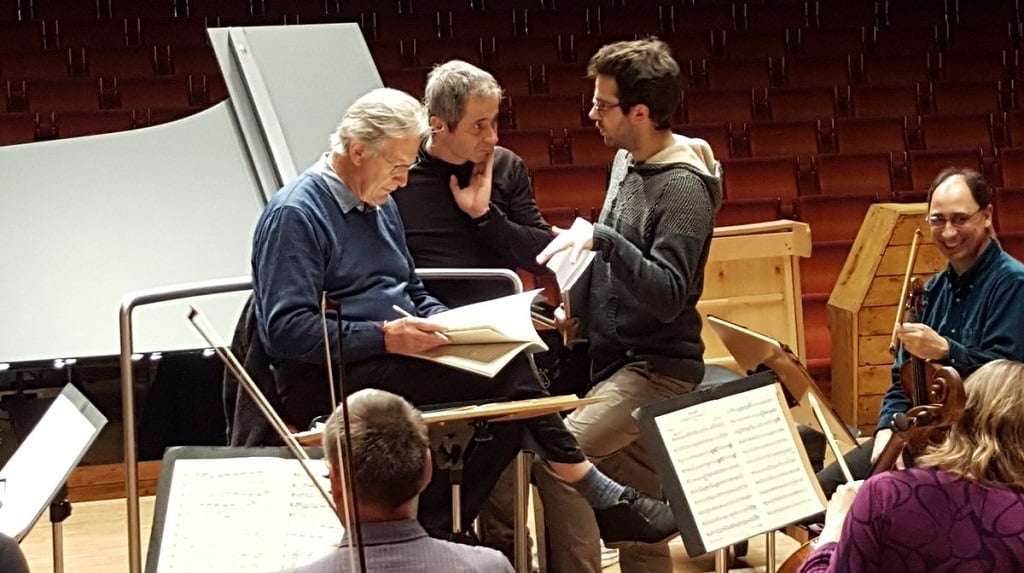 They opened, though, with later (1848), more worldly-wise Schumann, his Manfred Overture, an intensely empathetic imagining of Byron’s tragic hero, one of Romanticism’s darker stars, whom Tchaikovsky would later take to heart. As in all Gardiner’s recent LSO concerts, he kept the players on their toes, in that all who could stood to play, as was the custom two-hundred years ago. Whether it made this already über-responsive orchestra any more so, who can say? But the result was admirably dramatic and on the edge. The strings, with double basses behind the first violins through to second violins on the conductor’s right, had a marked histrionic bite and hard surface to their sound which got the high ups and low downs of Manfred’s troubled soul in one, and Gardiner pushed the music’s anxiety precipitately, the mood fixed decisively by immensely stylish hard-stick timpani and some wonderfully sepulchral last-gasp woodwind- and brass-playing as Schumann takes leave of his hero, for now.

This was historically-informed Schumann – modern instruments, but hardly any strung vibrato, and good period manners from woodwinds and brass. In the previous concert, a fortepiano was used for the Mendelssohn Violin and Piano Concerto (written in 1823), but a modern Steinway was moved into position for Beethoven’s C-major Piano Concerto (premiered twenty-eight years earlier in 1793), and Anderszewski adopted a well-defined soloist stance. I recently caught a performance on Radio 3 (conducted from the keyboard, as it happened) of this work where pianist and orchestra were in each other’s pockets to such a degree you could barely keep up. This was not like that. The brio of Gardiner’s Allegro con brio for the first movement was on the stately side, which allowed Anderszewski to spread himself, until suddenly the development moved up a notch to enjoy something like mercurial repartee. Anderszewski made a bit of a thing of emphatic accents, which initially gave an impression of living for the dynamic moments but soon palled, and he played the long Beethoven cadenza with plenty of romantic heft. The Largo had a lovely improvisatory quality, with the LSO woodwinds on dreamy form, and the Finale hit the spot with some spirited brilliance. But I know that this Concerto can floor you with its humour and quick-fire exchanges, and those qualities didn’t spring out of this performance.

Anderszewski’s encore, beautifully played and way out of the period, was the first of Bartók’s Three Hungarian Folk Songs from Csik.

Humour, pleasure, sentimentality and tenderness sprang out of Schumann’s ‘Spring’ Symphony, which, every time I listen to it, turns me inside out with its optimism. Gardiner didn’t drive it, but instead imposed a thrust and assertion to the first movement that seemed absolutely in character and was brilliantly conveyed by wiry, energetic strings and equally fine brass-playing. The Scherzo and its two Trios spun a great sense of fantasy and the contrast of portentous string and bubbling woodwinds in the Finale had the sort of breadth and geniality you thought only existed in Die Meistersinger. Again, all who could stand did so (they sat for the Beethoven) and the playing was electrifying, a fitting closure for this Schumann series. The Symphony and Manfred were recorded for LSO Live.