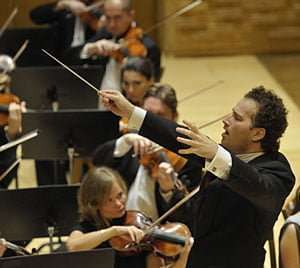 Previously at the LSO… Last week Nikolaj Znaider was soloist in Brahms’s Violin Concerto. This week he swapped bow for baton in Mozart and Mahler. He’s due to conduct The Marriage of Figaro and Don Giovanni at the Mariinsky this season, and it was clear that he was in the Mozart groove in his boldly authoritative direction of the late, and great, C major Piano Concerto – as with most of his concertos an opera in all but name. 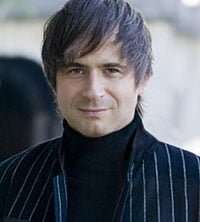 It was also clear that Piotr Anderszewski, last heard with the LSO six years ago, was in full Mozartean operatic mode, and more than equal to the music’s extravagant sophistication. The swaggering, slightly leisurely gait Znaider set for the opening Allegro maestoso gave Anderszewski plenty of scope to exercise his trademark sense of involvement with the music, from intimate diversions with the LSO’s superbly refined, knowing woodwind to an almost comically grandiloquent and virtuosic cadenza (composer not specified, so by the soloist, I imagine), and wherever you listened, there was something at work in Anderszewski’s playing that reeled you in – a blast of full-romantic piano tone that momentarily and shockingly flooded a phrase, a peremptory, finger-wagging emphasis to alert you to a change of tack, and the switches from surprisingly earthy good humour to veiled serenity. To describe Anderszewski’s playing as mercurial was only part of the story; he became the music, and the result was thrilling.Znaider’s tempo relaxed only a bit for the Andante, with Anderszewski escaping into Mozartean Neverland in playing that defined intimate, lyrical expressiveness. There was one detail in the finale that summed up its delight – Anderszewski played a sequence that plunged down the keyboard then whizzed up again, like a soundtrack to a Tom and Jerry cartoon, except that its upward trajectory was already grabbing on to the next event – a few seconds of incisively observed, subversive glee that saturated the whole movement. Anderszewski’s approach was easily matched by the LSO’s craftily etched playing, in turns tender, astringent and majestic. Mozart, you felt, would have got the point.

The last two movements of Mahler’s Fifth worked superbly well. An especially self-communing Adagietto, taken at a pace dreamy enough to let the harp’s undulations work their bar-dissolving magic, paused just long enough at the end for us to savour its muted interior, before Znaider threw open the shutters unto the finale’s breezy contrapuntalism, as vigorous and life-affirming as passages in Wagner’s Die Meistersinger.Znaider, though, didn’t entirely articulate the ripple of differences between the personal and general that feeds into the first two movements – a piece of psychological legerdemain that some people feel the composer himself doesn’t quite bring off – that can end up with the first three movements presenting symptoms of a suite more than a symphony. Individually they were mightily impressive, full of vividly realised detail, penetrating tension and some shattering climaxes. The fact that Znaider was conducting without a score indicates the special hold this difficult work has for him; I just wished that in the first of Mahler’s more personal, abstract symphonies there had been more I could identify with.

After the sumptuously upholstered sound the LSO produced in Schubert’s ‘Unfinished’ and that Brahms Violin Concerto recently, the orchestra’s approach to the Mahler could not have been more different – lean, clean and where appropriate satisfyingly mean, the playing brimming with character – the strings meshing with Znaider’s precise conducting style as if greased and delivering a sensational variety of tone and attack that flattered the superb brass and woodwind.