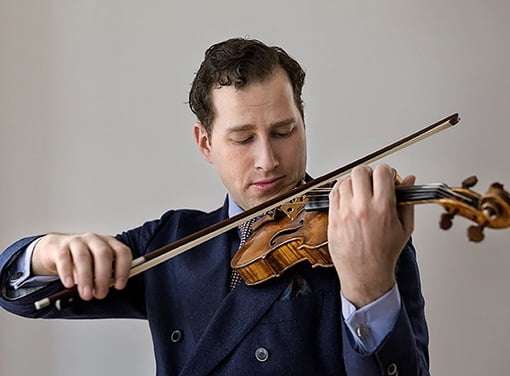 The LSO and Nikolaj Znaider have done well by each other since the latter’s debut as violinist in 2006 then as conductor in 2011. This concert was the last of three mixing Mozart’s five-numbered Violin Concertos with Tchaikovsky’s last three numbered Symphonies. The Mozart Concertos are due for release on LSO Live next year, and on the basis of the two played here, it promises to be a benchmark recording.

It’s well-known the extent to which Tchaikovsky revered Mozart, the latter an impossible ideal of musical expression to one of late romanticism’s more troubled exponents, yet it’s fascinating how close Tchaikovsky got to his goal of perfection, especially in his ballet music, which, with its poise and effortless melodiousness, thrives on its own merits.

As in this short series’ other two concerts, the LSO violins and violas stood round their soloist-director, a largish chamber orchestra (with two double basses), and generating an easy spontaneity. Znaider’s direction was suggestive rather that magisterial, like a chairman fielding contributions with the most informal of hand-gestures and, apart from an occasional lordly wave, distinctly non-interventionist, his intentions elegantly interpreted by leader Roman Simovic.

Except for the First, the Violin Concertos were all written in 1775, the same year that La finta giardiniera appeared. They are all in major keys, and all balance operatic effusiveness, formal clarity and expressive variety with typical prodigality. Znaider delivered No.2 with a decisiveness and intelligence that single him out as an exceptional Mozart interpreter, and while the orchestral sound had an attractive, non-period sheen, matters of scale and balance suited the music beautifully, oboe solos fed the soloist with some of his lines with a sly, conversational tact, the two horns provided discreet bulk as needed, and the string sound, with any ‘special’ effects limited to pizzicatos and mutes, projected and supported Znaider’s supple, silky tone from his ‘Kreisler’ Guarneri instrument, with the sort of rapport you get from a string quartet. Znaider set a perfect walking pace for the Andante, thus securing the music’s dreamlike weightlessness, and his off-the-cuff links back into the main tune of the Finale were just one instance of the quality and wit of his playing.

No.3, better known and, given that only three months separate it from No.2, astonishingly more the fully formed symphonic Mozart we get in the Piano Concertos of 1784. The scoring’s transparency was a particular pleasure in the heavenly Adagio, made quietly more intense by Znaider’s glowing tone and sustained crescendos, and he judged the gavotte’s insertion into the Finale perfectly. Both works set out to charm and Znaider more than fulfils his brief. He also has an intuitive understanding that playing Mozart is like hanging pictures – you notice the strength of the composition as a whole, as well as the slightest misalignment.

The pictures remained largely undisturbed in the first movement of Tchaikovsky’s ‘Pathétique’ Symphony, in that you were more aware of the composer’s skill in assembling the lengthy opening Adagio section than of Znaider’s ability to transcend mere procedure to push the music to the edge. The climactic, despairing void that determines the character of the whole work lacked the ultimate grinding finality – Gergiev with this orchestra got this moment terrifyingly right – so that the subsequent soothing melody didn’t quite ride to the music’s rescue. Just as crucially, there were no peripheral shadows lurking in the corners of the second movement’s off-beat Waltz, and the succeeding March similarly felt like more of an interlude than part of a long-term strategy exposing the composer’s soul. The LSO’s playing was magnificent – the woodwind solos offering a compulsive, abandoned lyricism and the brass from its first entry was electrifying. Znaider took an attacca into the Finale, when the Symphony started to come into its own, expressing all the subjective tragedy that drove the composer.