It may be September and the summer in decline towards autumn, but the start of the London Symphony Orchestra’s concert schedule for 2018-19 looked to the season of beginnings and awakenings with Britten’s Spring Symphony (1948-9) as the climax of this programme. The fine trio of vocal soloists did more than justice to the different registers and moods of the various texts set (mainly Elizabethan and seventeenth-century) – Elizabeth Watts brimming with light and sparkle in her few contributions; Alice Coote richer toned and questioning for Herrick’s ‘Welcome, Maids of Honour’ and Auden’s ‘Out on the Lawn’; and Allan Clayton sturdy and lyrical, whilst bringing great alacrity to Richard Barnfield’s ‘When will my May come?’. 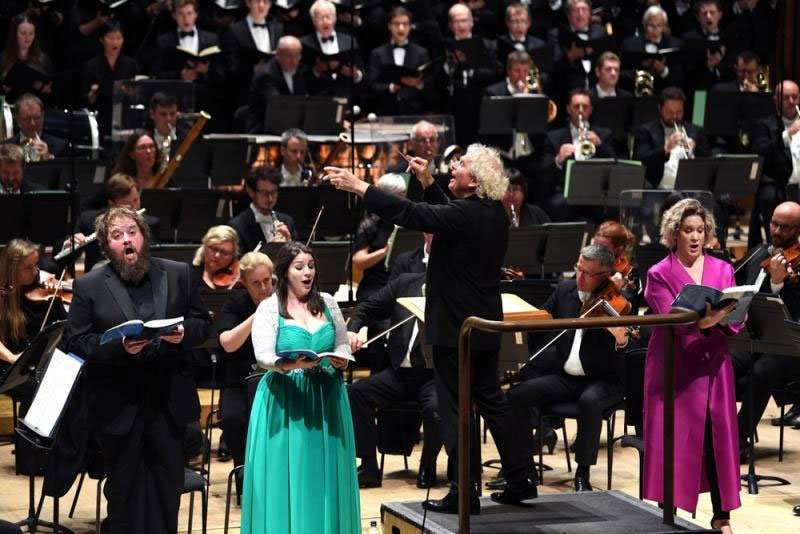 But for all the vivid detail pointed up by Simon Rattle and the LSO, with alternately atmospheric soundscapes and strongly-driven celebrations of the incoming of warmth and new life, the impression remained of a work that is burdened with far too much text, yet which barely rises to anything more profound or elemental than a twee, raucous depiction of the eccentricities of an English-village May Day ceremony. Having the London Symphony Chorus sway in time to the ecstatic arpeggios of the Finale hardly allayed the cringe factor, though the various Tiffin choruses’ contributions provided freshness and innocence, if excluded from the end of part three.

The concert opened with the premiere of Sir Harrison Birtwistle’s Donum Simoni MMXVIII. The strident brass of the LSO, set to the side of the rest of the orchestra, provided a call to attention, certainly, although the work ultimately avoids empty triumphalism with its characteristic energy that reaches an inconclusive whimper.

Holst’s literary inspiration in Egdon Heath (1927) offered something more tragic and bleak than Britten’s sources, as it conjures the “swarthy monotony” of Thomas Hardy’s imagined landscape (in The Return of the Native) which is described as mirroring man’s character. Rattle handled that monotony with artful effectiveness as he moulded the sections of the piece together seamlessly, whilst also maintaining an inner momentum, despite its murky (or, at best, mellow) textures. Beforehand Rattle related an anecdote that Sir Adrian Boult had encouraged to take an interest in the work, affirming it as a masterpiece. This reading certainly revealed an evocation of Nature that is imbued with a similar mystical stress as Vaughan Williams’s Symphony No.5 for instance, and both ought to be better known and more widely performed than they are, beyond being a species of English music.

Mark-Anthony Turnage’s Dispelling the Fears (1995) for orchestra and two trumpets has probably escaped any such confining categorisation, having found a place in the repertoire beyond the UK. Despite the presence of two soloists, the continuous twenty-minute or so score is not really a concertante work, although the truculent performance by Philip Cobb (LSO) and Gábor Tarkövi (Berliner Philharmoniker) was often a striving against the orchestra, as much as with it, in apparently expressing the scenario of the work’s title. The LSO sustained an urgent account of the work, surely implying the continuing struggle denoted by the present participle used in that title, and which barely let up despite one or two timely episodes of calm earlier on, and a euphoric section for the trumpets.