Prior to the LSO and Antonio Pappano unleashing Rachmaninov’s orchestral waves, Ashley Fripp gave us the composer’s pianistic presence. Fripp (born 1989), a recent graduate at the Guildhall School and a current nominee for its Gold Medal, impressed from the off with his gentle, extemporised way with the F sharp minor Prelude. His sensitive touch and dynamic variance paid many dividends during this complete presentation of Opus 23. Fripp brought poise and clarity, and a honed technique, to the grand utterances of the B flat example, which, while admirably unforced, could have done with a little more attitude and temperament. The figurations of the D minor were crisply delineated, however, and the D major was rapturously and tenderly unfolded. The martial aspects of the G minor were well-caught, its middle section nicely limpid. Where required there was no lack of sustained intensity or light-fingered dexterity, and the concluding Prelude (in G flat) was ideally serene and intimate – as if Fripp were playing in his study for a few friends. As an advertised encore, the onward motion of the Humoresque enjoyed decisive fingerwork and interpretative inner strength, the reflective passages rhapsodising poetically.

In The Isle of the Dead – Rachmaninov’s musical treatment of artist Arnold Böcklin’s inhospitable island, its trees and tomb, and the coffin-laden boat journeying towards this desolate place – Pappano and the LSO conjured a brooding opening of slow oars, the music then gathering unsettling intensity and spectral details. This very expressive performance reached a searing, desperate climax, a maelstrom of emotion, violins gleaming through no matter how much hammered-out vehemence was let loose from the rest of the orchestra.

Erich Wolfgang Korngold wrote his Violin Concerto in 1945 for Bronislaw Huberman and had it championed and recorded by Jascha Heifetz. It’s an adorable piece that found the composer revisiting several of his Hollywood film scores – love-scenes, sunsets, Errol Flynn and closing credits are in the mix. Leonidas Kavakos was in great form, really inside the music’s aching nostalgia and sizzling contrasts – his rich tone, affectionate phrasing, generous rubato and quick-change deftness (all underpinned by undemonstrative virtuosity), together with a very willing and felicitous LSO, Pappano directing the action, explored all avenues. Kavakos then found sweetness for a daringly spacious central ‘Romance’ and unassuming wizardry for the cartoon capers of the finale. As an extra he brought us the strangely beguiling pizzicato- and trill-encrusted first movement (‘L’Aurore’) of Ysaÿe’s Sonata No.5.

If Korngold’s ‘Romance’ suggested sea-lapped rocks, which linked it back to the Rachmaninov, then this attractive and thoughtfully mixed programme then went from one émigré 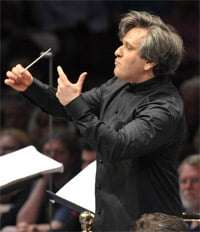 to America to another. Béla Bartók, ill and impecunious, was given a life-line by Serge Koussevitzky with a commission for the Boston Symphony. Concerto for Orchestra was the result, a score which abounds in numerous instrumental solos and focuses on orchestral sections but is so strong in ideas that the rich colour-palette is secondary to a potent and linear musical discourse.

This was a fresh-faced performance, pensive, exploratory and passionate in its opening measures, the ebb and flow of the first movement nicely free without sacrificing cohesion. Pappano didn’t hang around before starting the subsequent movements – tension kept agreeably simmering – slinky in the ‘Game of the Couples’ (with a fine-lined brass chorale at its centre), an uneasy and heartfelt ‘Elegia’, a perky and expressively moulded ‘Intermezzo interrotto’ (the interruption coming in the form of trombone ‘raspberries’, Bartók mocking Shostakovich’s ‘Leningrad’ Symphony) and a rapacious ‘Finale’ that helter-skeltered without losing sight of important motifs and only slowed where Bartók indicates that it should. From shadows a momentous coda was built to clinch a thrilling victory – further proof (and not forgetting his vocation at The Royal Opera) that Antonio Pappano and the LSO are one of the most productive and charismatic of musical partnerships around.