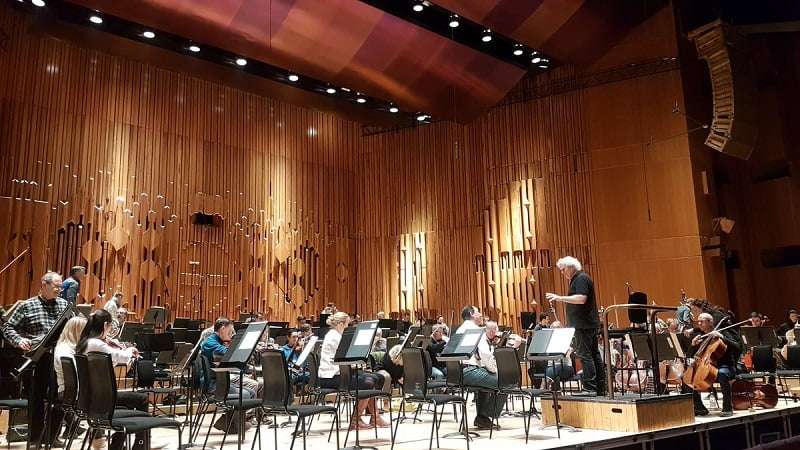 Our journey started in Hungary with the orchestration Bartók made from his Hungarian Peasant Songs for piano. The two contrasting movements – a slow ‘Ballad’ and then the variation-form ‘Hungarian Peasant Dances’ – immediately showed the secure relationship Rattle and the LSO have developed: a sumptuously supple, deep string sound coupled with characterful woodwind and brass: it marked a perfectly judged ten-minute opener and the ideal soundworld into the Rattle speciality coming next.

Szymanowski’s ballet-score Harnasie – eight years in the making and something of a homage mash-up to Stravinsky’s The Rite of Spring and Les noces – is a rarity, perhaps not surprising given its Polish text for chorus and tenor. It is sixteen years since Rattle recorded it and it’s good to see he is still championing it. From Olivier Stankiewicz’s exquisite oboe keening to start, through the surging orchestral contours and alternating folk dances (led by leader George Tudorache’s solos), the mix involves a tenor vocalising the brigand Harnaś (who elopes with the bride) and the London Symphony Chorus coping well with the Polish (drilled by David Lawrence – not named in the programme), if with some occlusion of diction. Meanwhile the programme – while printing the Polish – only gave an English summary (a full translation, as in Rattle’s EMI/Warner recording, would have been more useful). Towards the end, where Harnaś sings from afar to the abducted bride to see if his love for her is reciprocated, Tudorache left his chair and joined Edgaras Montvidas between piano and percussion to weave his solo line around the tenor. For such a rarity, Rattle produced a convincingly fine-honed and secure performance, making the best possible case for a work he describes as “crazy mountain music”. It was the highlight of this concert.

Following the interval and with the dispensing of violins and violas (and most of the double basses), we were off to America for the rhythms of jazz and Latin. Bookending the twenty-first-century’s only contribution to the evening – a curiously sourced suite, from a Passion, no less – were succinct jazz masterpieces. Co-principal clarinettist, Chris Richards, was seemingly reluctant to make a solo entrance, as he was already in place with his colleagues before Rattle’s appearance. Neither Ebony Concerto nor Prelude, Fugue and Riffs has a particularly large solo-clarinet part; rather both are showpieces for jazz band – a bank of saxophones in place. Rattle made much of the distinctive twang of guitar and harp (Tom Ellis and Helen Tunstall respectively) in the Stravinsky, as well as the brasses and saxes sections.

For the Bernstein, twenty-nine years to the day since his final appearance with the LSO (conducting Candide) – the piano part was shared between the Labèque sisters, who had earlier given Gonzalo Grau’s arrangement Nazareno (The Nazarene) they had commissioned based on Golijov’s La Pasión según San Marcos. Originally for full orchestra, Grau has – at Rattle’s request – honed the orchestration down to percussion, winds and a phalanx of twelve cellists. A double bass and two Latin-percussion players – Grau himself and Raphael Seguinier – joined the pianists, resplendent in matching sparkling dresses, one red and one black. The twenty-five-minute Nazareno segues through six movements, each with a distinctive Latin rhythm at its core, building to the central contrast between the infectious ‘Guaracha y Mambo’ which suddenly falls into silence for the yearning heart of the work, ‘Sur’. It’s a winning mix that belies its religious inspiration, providing a succession of pounding pianistic rhythms as well as the more lyrical and moving passages of ‘Sur’.