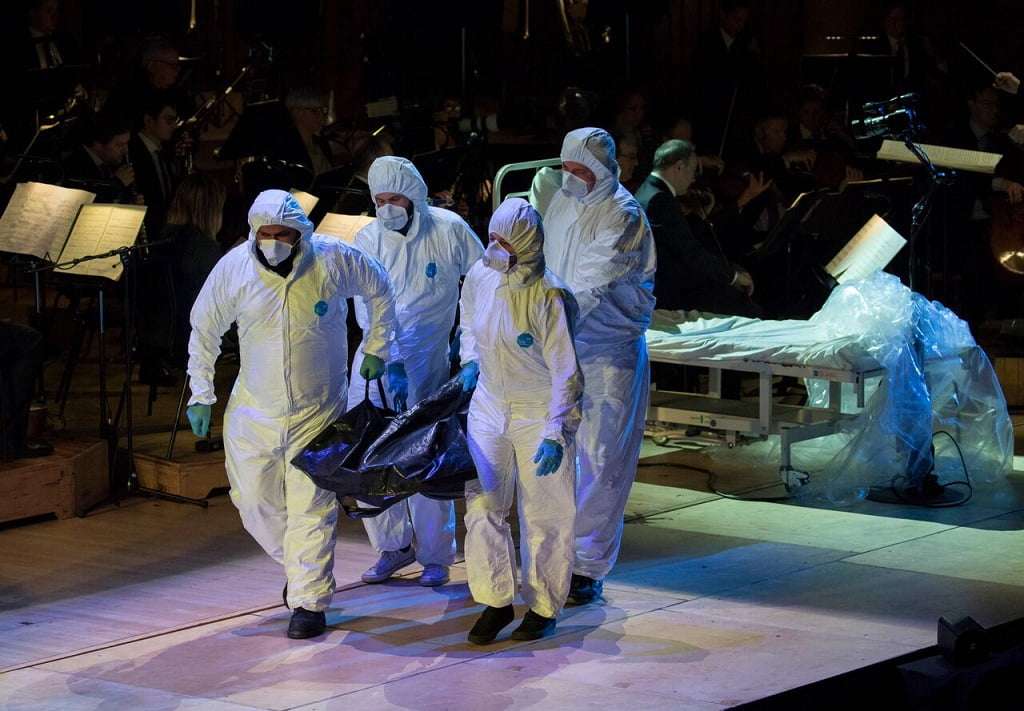 Those who experienced ENO’s 2009 staging of György Ligeti’s Le grand macabre will remember its gleeful celebration of sex, bodily functions and carnal corruption, all of which meshed in well with Ligeti’s delirious score, written in the 1970s and substantially revised in 1997 (basically less talk, more music) for a second ‘premiere’ at the Salzburg Festival that same year. The production by Peter Sellars – which Ligeti did not care for at all, to the extent that he dissociated himself from it – was a post-nuclear updating, and it is a much reduced version of this, devised by Sellars, that the LSO and the Barbican Centre has mounted for two performances.

The opera, mischievously described by the composer as an anti-anti-opera, is thoroughly in keeping with the absurdist theatre style of, for example, Alfred Jarry’s Le roi Ubu and it needs a staging that can measure up to its anarchy, bawdy humour and off-the-wall surrealism. Ligeti, though, only has himself to blame for providing directors with such tantalising fare, and he was unlikely to have complained about the rapidity of its progress into numerous houses in the relatively short period before he died in 2006. 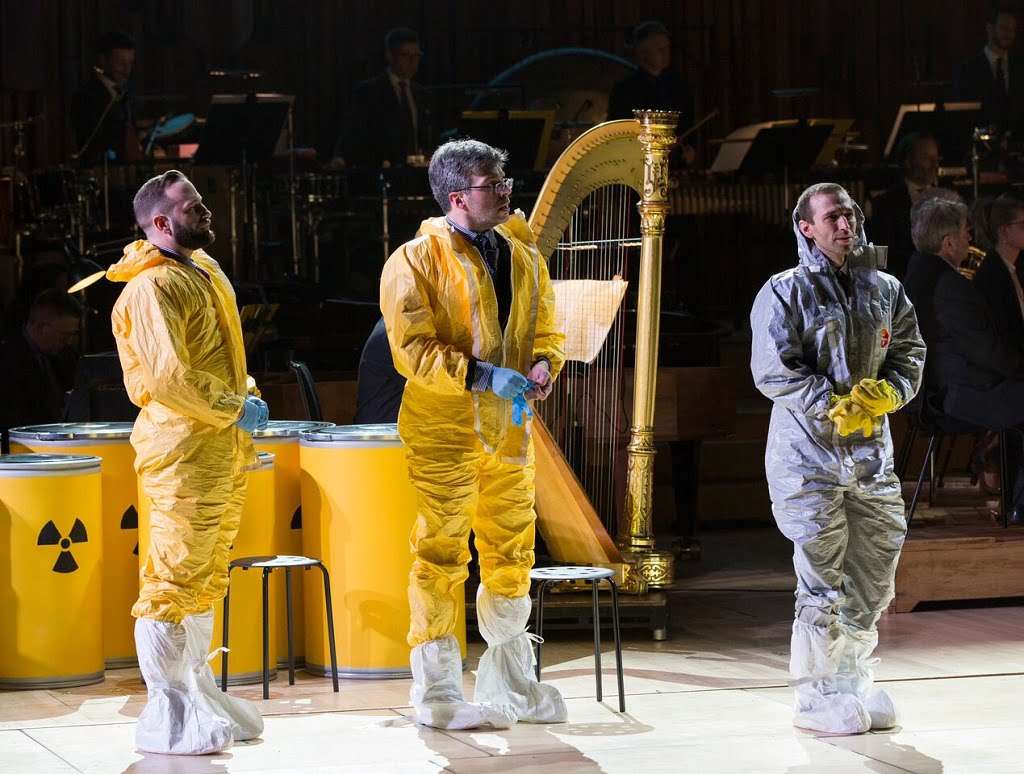 The opera is part morality tale, part pantomime, part political diatribe – it is open-ended enough to accommodate virtually any genre apart from high tragedy. Le grand macabre of the title is Nekrotzar, aka Death, who announces that the end of the world is very nigh. Astradamors, the head astronomer of Bruegelland – Ligeti was inspired by the apocalyptic paintings of Breugel and Bosch – confirms that a comet is on collision course with Earth as his wife Mescalina confirms that he can’t satisfy her needs, which in turn are terminally taken care of by Nekrotzar. With the everyman figure of Piet the Pot, who is permanently drunk, in tow, they travel to the palace of Prince Go-Go, who has similarly been told by his chief of police Gepopo that global catastrophe is imminent. Everyone gets drunk, the world doesn’t end, and the moral, such as there is one, of the opera is that there is no point fretting over mortality. Enjoy life while you can.

Sellars has set his semi-staging in the context of a summit conference about the future of nuclear power. Drums of nuclear waste surround the orchestra and the main production feature is a series of doom-laden films of pre- and post-nuclear apocalypse, backed up with statistics about the proliferation since 1945 of nuclear events round the world. It is far too heavy-handed and circumscribing for a work that you initially think is going to blossom into a coherent vision but which steadfastly keeps its options open as a sequence of ever zanier episodes throughout its four scenes, and the video projections behind the orchestra tend to tyrannise and dwarf the action at the front of the stage. 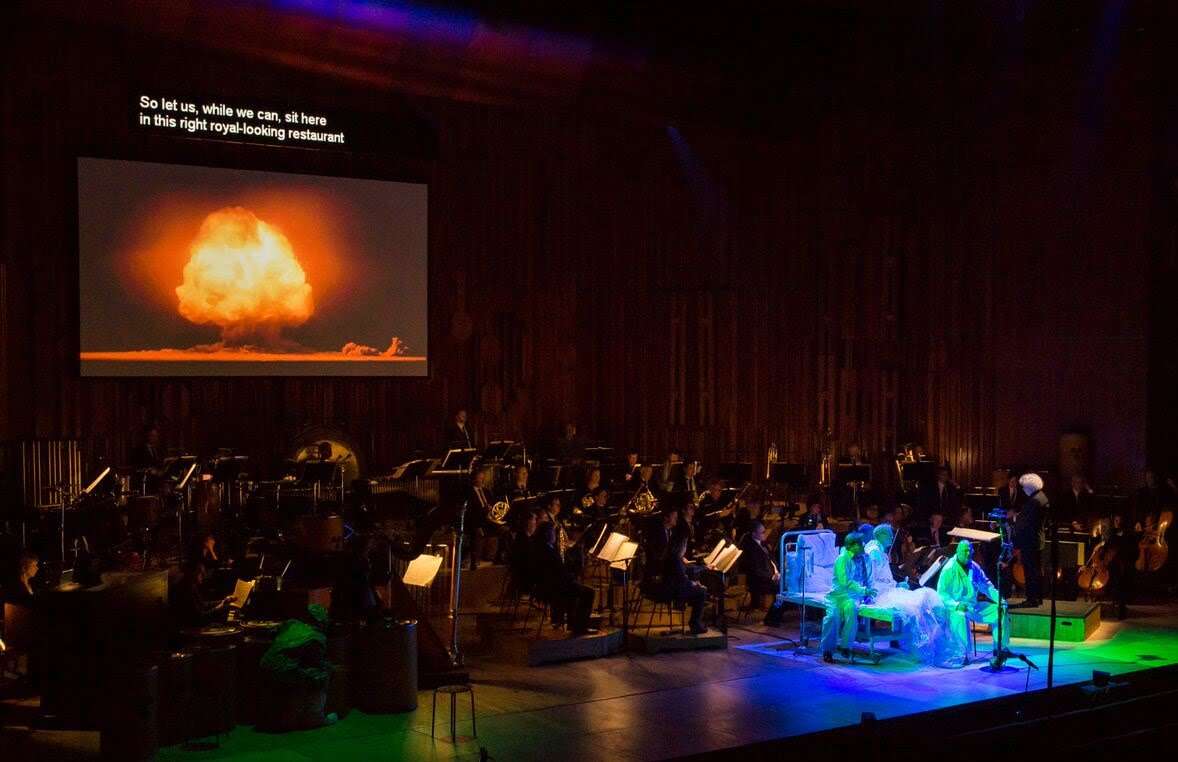 In the end, though, the music wins through and the singers all entered into the spirit of things. Peter Hoare’s high tenor was entirely in keeping with the whining ramblings of Piet the Pot, and Hoare saved him from becoming a redundant character, however much he represents the common man. Pavlo Hunka provided a majestic parody of dictatorial bombast as Nekrotzar and compared strongly with Frode Olsen’s neurotic Astradamors who is completely overshadowed by his nymphomaniac wife Mescalina, in a scorching performance from Heidi Melton. The couple’s computer sex-games are in marked contrast to the rampant sex-life of Amando and Amanda (called Spermando and Clitoria in the original version) sung with endearing abandon by Ronnita Miller and Elizabeth Watts. Anthony Roth Costanzo put his penetrating countertenor and astringent diction to fine use as the petulant Prince Go-Go, the soprano Audrey Luna brilliantly negotiated Gepopo’s coloratura from a hospital bed as the character succumbs to radiation sickness, and Prince Go-Go’s two ministers, presented predictably as Tory and Labour MPs, were trenchantly sung by Peter Tantsits and Joshua Bloom. 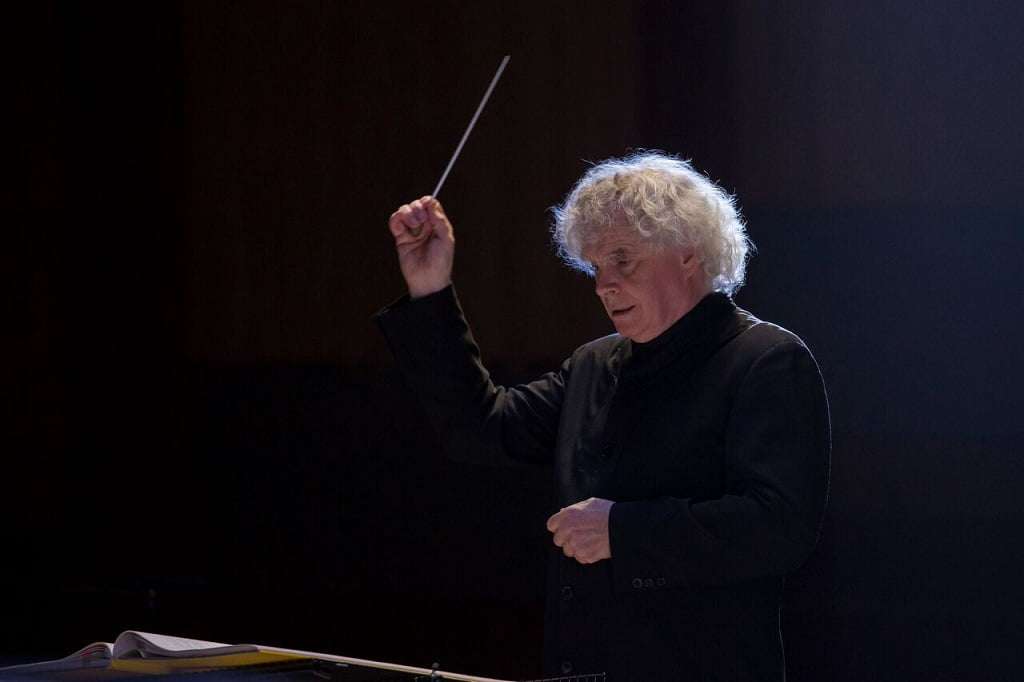 Sir Simon Rattle’s affection for a score that ranges from fanfares for car-horns to solemn chorales and the most-tender love music filtered through Ligeti’s extraordinary parodistic and style-borrowing skills was evident throughout as he revealed layer upon layer of detail, and the breathtaking quality of the LSO’s playing only reconfirmed the opera and its composer as giants of modern music. The London Symphony Chorus, conducted by Simon Halsey dressed as a lab technician, erupted into the auditorium to make the crowd scenes deafeningly totalitarian.