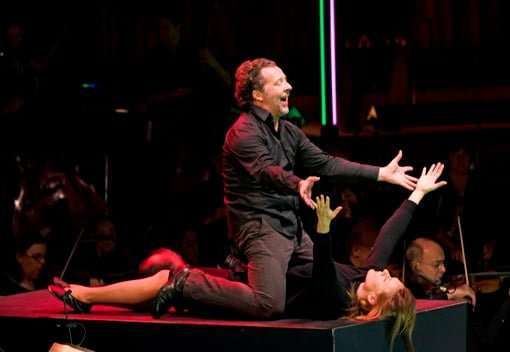 Before ushering us into the crepuscular kingdom of Allemonde, the LSO’s Music Director designate gave a short tribute to the late Pierre Boulez and dedicated this performance of Debussy’s Pelléas et Mélisande to his memory. You couldn’t help ponder what that great exponent of this opera would have made of Simon Rattle’s interpretation. For all Boulez’s forensic clarity, from him the music was steeped in mystery and melancholy, whereas with Rattle colour and direction takes priority.

This was emphasised by the layout of the orchestra, with strings (cellos and double-basses in the middle) surrounded by and mollifying the impact of the brass and woodwinds. It complemented Peter Sellars’s forthright concert staging of two performing areas in front of and behind the orchestra, with a small raised platform immediately to Rattle’s left for the drama’s more intense moments enabling a fluent immediacy to the ensemble. Vertical coloured fluorescent tubes were scattered round the stage to suggest the forest gathered around the castle. 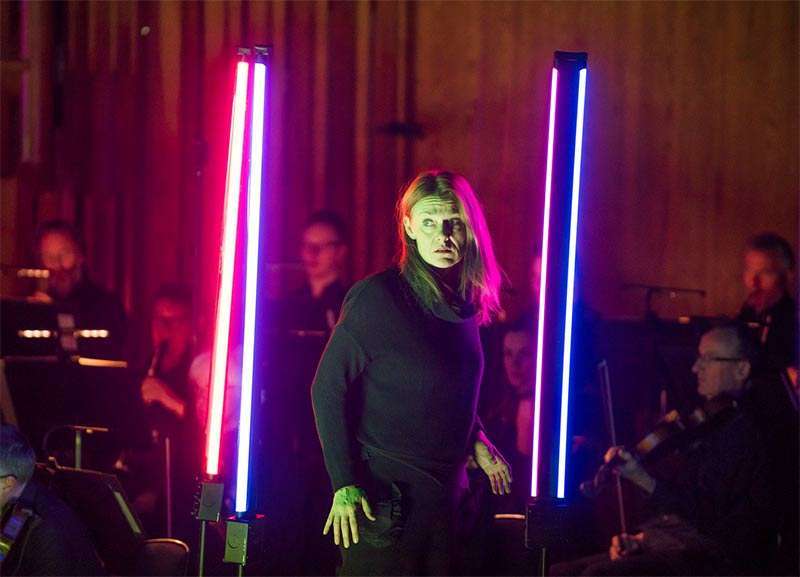 Sellars’s plan stripped away the opportunities for gothic ambiguity, propelling us into the harsh adult realities of deceit and sexual jealousy; and in Magdalena Kožená’s Mélisande he had the wherewithal to make his point. Kožená was definitely not a gentle, innocent Mélisande, meek and mild, but traumatised, damaged goods, Kundry with a French accent. This was compounded by her full mezzo floated on a robust vibrato, which sounded full of worldly experience. Far from being the mystery wrapped up in an enigma aspired to by many a staging, the fragile creature Arkel describes as “timide”, this Mélisande pushes boundaries.

Her first words are “Ne me touchez pas”, but her hands were soon roaming freely over Golaud and Pelléas. It was a far remove from Debussy’s and Maeterlinck’s liminal, passive heroine, but you couldn’t deny the consistent assertiveness of Kožená’s portrayal. What she hasn’t nailed, though, is the sub-conversational flow of the declamatory vocal line and its independence from the orchestra. 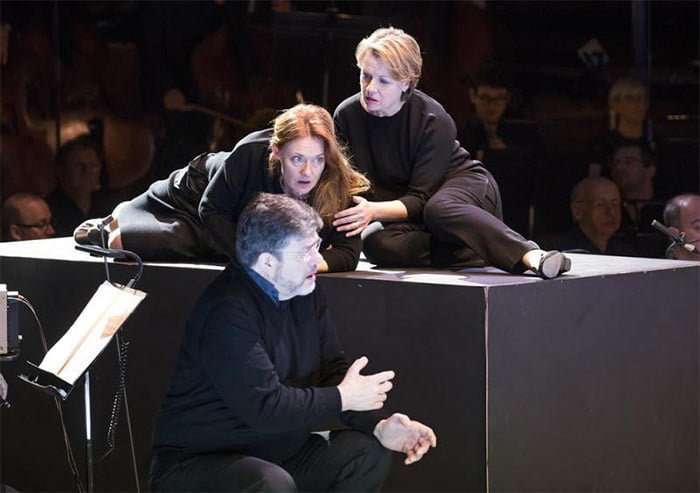 If the rest of the cast had been as against type, the drama’s impact would have been seriously compromised. Sellars’s direction of Pelléas and of Golaud, though, and his signature, here lightly applied stylisation delivered a fatalistic sense of enclosed doom. Gerald Finlay generated a terrifying violence as a notably thuggish Golaud, and his charting of this victim’s course from first suspicions about his wife and his brother through to their bleak confirmation never relaxed its grip. A looming hulk of misery stalking his prey, Finlay’s Golaud also delivered the words with easy clarity, leaving the orchestra to supply the emotional content. The out-of-control fury of his violence towards the clearly pregnant Mélisande in Act Four – he kicks her in the stomach – and the despair the abused abuser revealed in the closing scene came from singing and acting of the highest calibre.

Christian Gerhaher’s Pelléas was similarly contained, and his boundless vocal flexibility, with a hint of nasal head-tone pointing the way to the role’s Gallic high-baritone range, expressed Pelléas’s innocence, insecurity and self-absorption with caressing sweetness of tone. His vocal sensuality ebbed and flowed magically in the scene with Mélisande’s hair, and I was completed unprepared for the sheer size of his voice in the love-scene’s outpouring of lyricism. 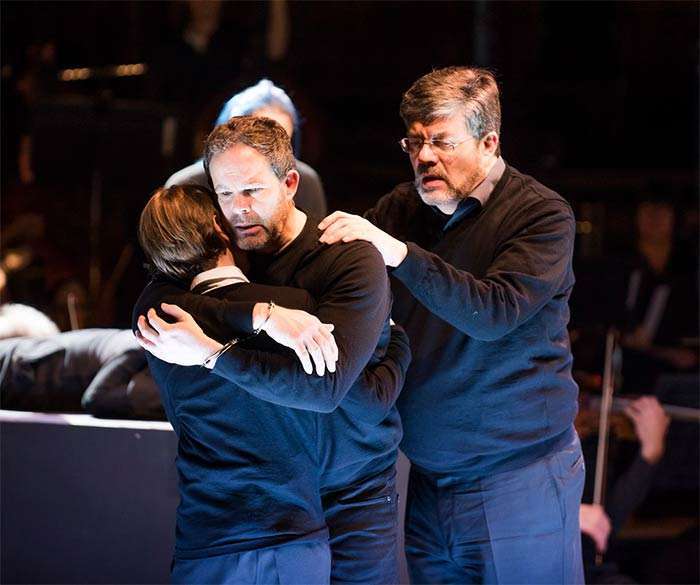 This moment of verité towards which the opera has been moving may have been obscured by the staging, but Rattle made sure that Arkel’s big solo in Act Four, magnificently sung by Franz-Josef Selig, anticipated and intensified its impact.

Bernarda Fink’s stylish Geneviève made you wish that the role had more to do, and the unnamed treble from the Tölzer Knabenchor had a very cultivated tone as Yniold. In the latter’s scene with the Shepherd, Sellars couldn’t resist making a political point about border controls, his wayward sheep represented by three refugees, one of whom he handcuffs, and Golaud is also handcuffed in the final scene, but it was a lame and puzzling bit of direction.

Underpinning the evening was the LSO’s endlessly allusive, subtle playing, never dropping a stitch in its response to Rattle’s intuitive, passionate and long-standing relationship to this profoundly troubling work.