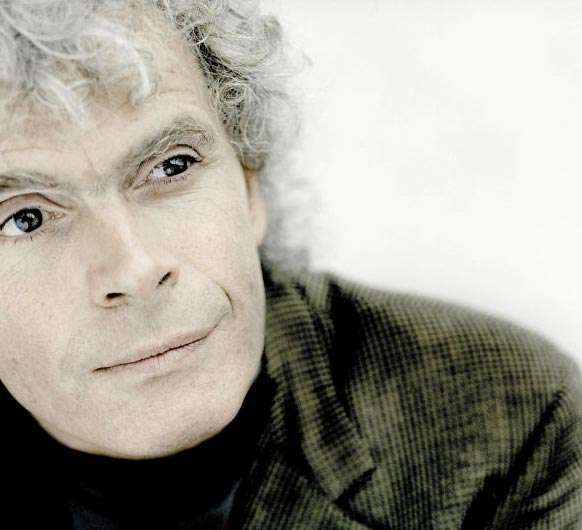 Whatever the future holds for Simon Rattle and the LSO – and you know what I mean – this concert proved to be a beacon of productive partnership and also something special for Barbara Hannigan’s scrapbook.

The evening opened with Anton Webern’s Six Pieces (1910/28), from a very selective list of 31 published opuses, heard in the composer’s revision for a less-large orchestra. However aphoristic and economic, each one was given a richly expressive and pictorial outing, Rattle (like Pierre Boulez and Zubin Mehta) is a long-standing and fastidious champion of this fascinating and far-reaching repertoire, previously with the Vienna Philharmonic at this address and the Berliners at the Proms. He brought the Pieces alive, the LSO confident of every colour, nuance and dovetailing phrase, particularly compelling in the relatively sizeable ‘Funeral March’ (four minutes out of 12), from suspenseful shadows to a seismic and desperate climax, and then a shocking silence in its aftermath. 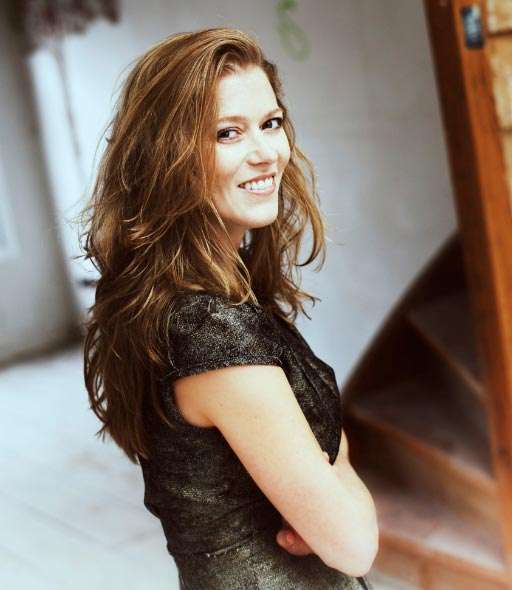 Enter Barbara Hannigan, dressed appropriately in a blood-red gown, for Alban Berg’s Wozzeck Fragments, a trail for the opera. What sheen and depth of sound Rattle conjured from the LSO’s strings (maybe aided by having the rear ceiling-mounted sound-deflector turned inwards – not its normal position), dramatically potent from the off, and with one of the great military marches given with dangerous swagger. Hannigan (as Marie, there is no place for Wozzeck himself here) was vocally voluptuous and brought a dizzying array of acting through the voice, facing the orchestra when not singing, Rattle and the LSO staging the music for our ears.

Hannigan is remarkable and went beyond even this in Mysteries of the Macabre, as arranged by Elgar Howarth from György Ligeti’s 1970s’ opera Le Grand Macabre. The orchestra, strings reduced, but with celesta, harp, harpsichord, piano and mandolin, plays its anarchic part in this nine-minute scena with paper-tearing and tribal-drumming percussionists, rasping trombones and contrabassoon, and brass-players blowing air through their instruments. The singer, as Gepopo (Chief of Secret Police), not only has to embrace huge vocal demands but also some nonsense language. Dressed as a naughty, provocative schoolgirl (as pictured), ready for a particular type of party, Hannigan was a fabulous performer, flouncy, bouncy and with teasing and robotic gestures, at one turn usurping Rattle (well she is a budding conductor) and then he anxiously clutched his head at the thought of “Prime Minister Farage”. Something of a free-for-all, then – like Gilbert & Sullivan, Ligeti can be updated and interpolated – this brought the house down. 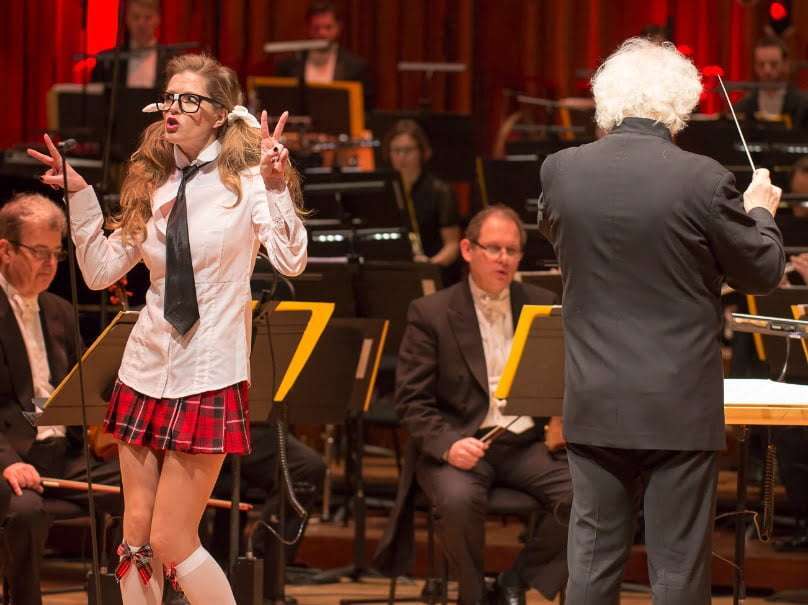 Finally, The Rite of Spring, one of Rattle’s specialties (he has recorded it three times). Leaning on the back rail of his podium, the conductor simply bid that Rachel Gough begin the work with the high-lying bassoon solo, which she did most eloquently. Overall this was a weighty and driven performance, the LSO on its mettle, with sometimes speed and fortissimos a little too much. If the eerie opening to Part 2 could have been even quieter the muted trumpets were spellbinding in this respect, but the rest of the movement, for all the clarity of motifs and details, was a little too deliberate, not least in the final ‘Sacrificial Dance’ which was short on delirium and ultimately anticlimactic.

Nevertheless, while wondering what happened to a horn passage in Part 1 (whether fluffed or edited out – we weren’t told what publication Rattle was using but it was probably 1947 as on his recent Berlin recording), there was an agreeable air of spontaneity here rather than micro-managing. The LSO has another excursion with The Rite on April 20, under Peter Eötvös, and Rattle returns to the orchestra in July: whatever the next years bring you know that Rattle and the LSO are going to be good and regular friends.