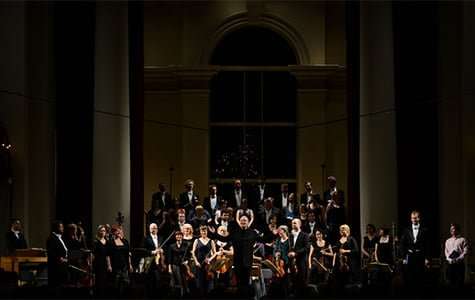 To open this year’s Lufthansa Festival of Baroque Music, the Gabrieli Consort & Players under Paul McCreesh presented Handel’s Ode in praise of Moderation. With its general lack of narrative and sensation, L’Allegro, il Penseroso ed il Moderato can be a difficult work to realise with panache. But the Gabrieli members were certainly persuasive advocates in observing Charles Jennens’s words in the third part to “keep, as of old, the middle way”: the musicians married their considered and vital approach with a palpable enjoyment of the many imaginative instances of word-setting afforded to Handel by the rich imagery of the text.

The only notable flaws were some slight inaccuracies from the horn and trumpet soloists in ‘Mirth, admit my of thy crew’ and ‘These delights if thou canst give’ respectively, though in a sense these lapses merely underlined the performers’ otherwise admirable virtuosity in negotiating their tricky parts (Handel requiring almost vocal agility) on valve-less instruments. Particularly commendable was Katy Bircher’s supple and fluid flute solo in ‘Sweet bird’, poured forth with spontaneity similar to real birdsong. In this long, slow aria there was no loss of momentum as McCreesh skilfully manipulated the tempo so as to create a hushed sonic haven but also to allow the music to press on when necessary, with Bircher’s bird and Gillian Webster’s Penseroso in teasing, almost flirting, duet. 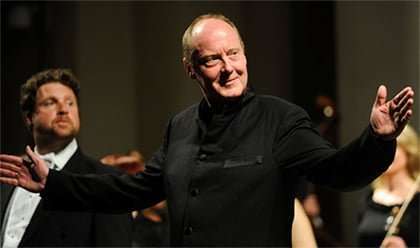 McCreesh opted to perform the earliest version of the score, resulting in the omission of a few numbers we might be accustomed to hearing. Surprisingly, though, only the first part was prefaced with the instrumental preludes we know Handel used at the premiere – in this case the first two movements of Opus 6/1 in which the strings were a little rough-edged, even gritty, but this was not a problem in the Ode itself.

The role of Allegro was refracted through the treble, tenor and bass, the former being another and delightful nod to Handel’s preference in the original performance. Their collective opposition to the claims of Penseroso was made visibly clear by their singing on the far side of the platform. But for different reasons the singers did not possess the fullest degree of alacrity that the character of Allegro ideally requires. Jeremy Ovenden had the first word, and sounded rather disinterested and leaden. He engaged more in advancing Joy’s cause but tonally he only really became free of a slightly curdled, whining quality in ‘As steals the morn’, though that served to emphasise the lucidity of Reason’s “restoring intellectual day” as the cause of Moderation wins out.

Laurence Kilsby provided a more sweetly innocent aspect to Allegro. His youthful singing was marked by a roundness of tone that resembled a fully-fledged soprano voice, more than trebles usually do, such that his casting in this theatrical role was credible. Musically his voice was as mellifluous as his older peers, though his steady and sober tone – otherwise laudable assets – might have suggested the disposition of Moderato more than Allegro. In the numbers for bass, Ashley Riches showed earthy, Falstaffian jollity at times, as in ‘I’ll to the well-trod stage’ and ‘Populous cities please me then’, but on other occasions he was more coolly didactic.

Gillian Webster made the case for Penseroso with generally radiant vocalism, but sometimes let the mask slip by lapsing into a seductive tone – how could one not with the euphony and attractiveness of Handel’s setting? Webster and Ovenden came together for a calm rendition of the penultimate ‘As steals the morn’ in which, even so, Handel’s music can only suggest that the way of Moderation is to be sought not solely in objective, abstract reason but in balanced alliance with the emotional faculties. The chorus members fully concurred by creating an integrated and precise sound without seeming cold and solid: their textures may be likened best to marble.