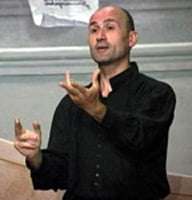 “Rodrigo” is one of only two operas (the other being “Agrippina”) that Handel wrote in Italy. He was 22 years old and learning his craft. Thus much of the music is conventional and could have been written by any decent composer of the period.

Act One is dull, though Acts Two and Three are more interesting, with Evanco’s aria ‘Il dolce foco mio’ and the duet for Rodrigo and Esilena in the last act both moving and enjoyable. Fortunately, Handel recycled some of the material from “Rodrigo” for his later operas, transforming it into truly memorable and outstanding music

This sold-out, semi-staged performance was part of the Lufthansa Festival of Baroque Music and, unusually for a Handel opera, an Italian cast performed it. The orchestra was superb, with wonderful contributions first violin, first cello and the first recorder. Federico Bardazzi conducted with grace and enthusiasm.

Of the singers, Gloria Banditelli was the only one with an outstanding voice: warm, smooth and evenly projected. She did not sound too sure of herself at first but it did not take her too long to get into her stride. Especially enjoyable was her ‘Siete assai superbe’ in Act Two with its superb runs.

Laura Cherici’s soprano has a mezzo tinge to its tone, as well as being somewhat husky and grainy. It suited the character of Esilena, who has many slow ‘lamenting’ arias; ‘Egli e tuo’ and ‘Perche viva il caro sposo’, both with cello obbligato, were especially attractive. Her spectacular aria ‘Per dar pregio’ at the end of Act One pitted her against the first violin – which won the contest with ease.

Annamaria dell’Oste’s soprano is a brighter, colder sound with minimum vibrato, perfect for the character of Florinda, who was in fury most of the time! Her ‘Fredde ceneri d’amor’ in Act Two was excellent. The third soprano, Susanna Rigacci, has a wide range but had problems with her intonation in her first aria in Act Two, although she gave a good account of herself in her second aria.

Contralto Caterina Calve must have been very nervous. In Act One she was hesitant and her intonation suffered. She recovered for the second act: her only aria being better articulated and projected. The only male singer was the tenor Leonardo De Lisi, who was certainly very enthusiastic. His ordinary tenor has a good range but tends to lose focus and quality at the bottom. His intonation also suffered and his runs were frequently smudged.

I wish I could be more enthusiastic. To hear Italians singing in their own language is a pleasure in itself … but very few Italians know how to sing Handel (or Mozart for that matter).