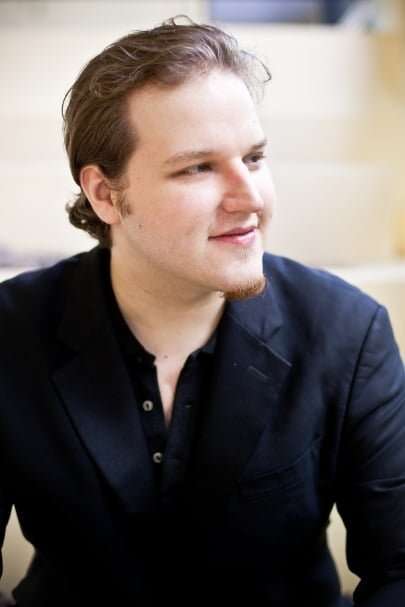 Lukáš Vondráček – who made his London debut in 2002 at the age of 16 – returned to the International Piano Series for two world premieres, albeit of quite short pieces, sitting side by side with works by nineteenth-century German composers and a twentieth-century Russian masterpiece.

The English composer Graham Lack (born in 1954) is less well-known in his homeland than in Germany, where he has spent most of his working life. He spoke in the pre-recital event about the dominant influences on his work, including his debt to Messiaen and Ligeti at the harmonic and rhythmic levels as well as to Arvo Pӓrt. Lack’s upbringing in the British choral tradition and familiarity with change ringing, with permutations that follow a precise mathematical mode, play a part in the genesis of the set of six Preludes, of which the first two were heard here. His other point of departure is a nonsense word occurring in James Joyce’s Finnegans Wake, the infamous “quark” which Lack argues was probably a solecism for “quart” and which represents an extra-musical “fun idea”. This was later seized on by atomic physicists to represent fundamental constituents of matter in particle physics. Quarks have their individual colours or “flavours” but live for a very short time, although they have a relatively long half-life. Seen through the prism of Lack’s musical inspiration, individual sounds collide and overlap, resonating with spatial effects as with all bell-ringing: these two short pieces begin softly with descending scales, progressing through accentuated cascades until the ripples stretch – barely audible – into infinity.

A native of the Czech Republic (with the last six years spent in Boston to continue his studies) Vondráček’s offering from his mother country was ‘Love Song’ by Josef Suk, from a set of pieces composed between 1891 and 1893, before his life descended into darkness and tragedy. This early work shows the influence of Brahms and his teacher, later his father-in-law, Dvořák. It has appeared in many guises over the years, becoming very popular in an arrangement for violin and piano, and also orchestrated. Vondráček produced a wonderfully graded palate of sound, supported by luminous textures and with clean and elegant articulation. The limpid quality of his playing was testimony to one of his declared pianistic heroes, the great Dinu Lipatti.

One challenge facing a pianist who attempts Schumann’s Symphonic Studies is deciding which version to play. From its beginnings in 1834, when the composer wrote a series of variations on a theme provided by an amateur musician and to whose ward-of-court he was coincidentally engaged at the time, through a major revision in 1852 until a critical edition published by his later wife Clara and Brahms in 1873, the work was constantly evolving. Like so many of his piano pieces, Opus 13 was almost entirely neglected during the composer’s lifetime. While he was alive Schumann referred to this work by at least eight different titles; a lifetime later, when Alfred Cortot made his 1929 landmark recording, he claimed to have been the first pianist to include the five posthumous variations as part of a complete performance.

Vondráček dispensed with these (and not sanctioned by Schumann) and played the twelve variations that follow the short introductory theme announced in the somewhat bleak key of C sharp minor. This is music conceived on an expansive scale requiring brilliance and bravura but also an ability to plumb considerable emotional depths. Much attention is devoted in critical commentaries to the complementary bipolarity present in much of Schumann’s piano music, the dynamic excitability of Florestan pitted against the melancholic introspection of Eusebius. Vondráček’s young man’s heart was worn very much on his sleeve, with mercurial swings in mood from feather-like delicacy to outbursts of passionate intensity. It was Florestan who had the upper hand throughout. As we reached the final, triumphal, section I could have wished for a little more relaxation and a longer-breathed approach. Was this really a march? It sounded dangerously close to a gallop at times. High-octane certainly, but the majesty was missing.

By the time Brahms came to write his Opus 118 set of Six Piano Pieces he was nearing the end of his life; indeed, this collection was his penultimate composition for piano. Previously he had jotted down in his notebook the observation that “Old people are the best at seeing the large picture”. It can be argued that in the economy of melodic material Brahms used he is dispensing with grand gestures and withdrawing into an inner world in which simplicity of utterance is paramount. This is reflected in the key-signature scheme which represents a descent in whole steps: A, G, F, E flat.

Four of the Pieces are entitled ‘Intermezzo’, but the term is misleading. There are no obvious connections and the character of these movements ranges from passionate muscularity to introspective mystery, with a boisterous ‘Ballade’ placed third and a reflective ‘Romanze’ fifth. Vondráček offered a carefully nuanced approach in terms of characterisation, alive to the sudden shifts in harmonic focus and with only occasional moments of unnecessarily forced tone. The desolation with which the final Piece ends, dying away like an act of expiration, offers no consolation. Ultimately, these creations raise questions; rarely, if at all, do they provide answers.

Prokofiev’s Seventh Piano Sonata is the middle work of a trilogy of so-called ‘War Sonatas’ written in the shadow of Stalin’s terrible purges in the 1930s and the outbreak of the Second World War. It was given its premiere by Sviatoslav Richter in 1943 when he was no older than Vondráček is today. Its message is clear from the opening bars. A constant restlessness is married with the prevailing mood of uncertainty and chaos, delivered with white heat. This is dynamite on the keys, and Vondráček rose very impressively to the technical challenges. But there is a danger in being blinded by the barbarism of the opening movement and the breathless dynamism of the finale. Prokofiev creates in the wonderfully lyrical central Andante caloroso (warmly) moments of repose, introduced by a theme taken from Schumann’s Liederkreis (the Opus 39), ‘Wehmut’ (Sadness). Despite the dominant sense of anguish, laid bare by Vondráček, it was the succession of magical half-tones which he produced, like shafts of moonlight on an icy lake, which I particularly treasured.

A single, gentle, encore followed, ‘Trӓumerei’ from Schumann’s Kinderszenen, to complete a rewarding evening of solid and undemonstrative musicianship.