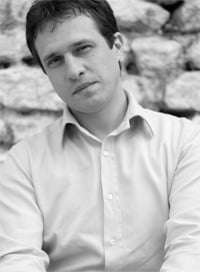 This revival of Franco Ripa di Meana’s 2009 production of Verdi’s La traviata by Teatro del Maggio Musicale Fiorentino was to have been conducted by Andrea Battistoni, but he withdrew owing to illness and has been replaced by Giampaolo Bisanti, who returns to the Maggio after debuting there in 2008. The opera’s three major roles (as well as several lesser ones) have been double-cast; on this opening night Violetta was sung by Marina Rebeka, Alfredo by Aquiles Machado, and Germont by Vladimir Stoyanov.

Rebeka started a bit cautiously but soon warmed up, building up in vocal power and demonstrating an agile coloratura in the ‘Brindisi’ and climactic ‘Sempre libera’ at the end of Act One. She effectively portrayed Violetta’s changing emotions as the opera’s plot unfolds and her life ebbs away. Rebeka’s voice blended beautifully with Stoyanov’s in their Act Two duet, and her ‘Amami, Alfredo’ at the moment of Violetta’s parting with Alfredo was suitably dramatic. She brought great tenderness to Violetta’s death-bed duet with Alfredo, her voice holding up well in this grueling role.

Machado was a fine Alfredo, his bright tenor ringing out with warmth and clarity and finding an excellent balance with Rebeka in each of their duets. His voice was strong throughout the performance, but carried especially well as he sang ‘Lunge a lei’ in front of the curtain to begin Act Two. Alfredo’s emotions shift repeatedly – from desire to love, anger, jealousy, remorse and sorrow – and Machado reflected this well in his singing and acting. 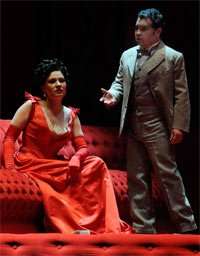 The most crucial scene is the Act Two confrontation in which Germont persuades Violetta to break off her scandalous relationship with Alfredo in order to preserve the marital ambitions of Germont’s daughter, Alfredo’s sister. Stoyanov was a vocally strong and secure Germont, and his scene with Rebeka’s Violetta was beautifully sung. However, Ripa di Meana’s stage direction often keeps Germont at a distance from the characters with whom he interacts, which diminished somewhat the dramatic effect. Likewise, during Stoyanov‘s beautifully sung ‘Di Provenza, il mar, il suol’, in which Germont tries to persuade Alfredo to forget Violetta and return to Provence, father and son were positioned at opposite sides of the stage. Similarly, in the quintet in the final scene, Germont was stationed far away from Violetta and Alfredo.

Although the opera is dominated by its three leading characters, all of the supporting cast contributed well musically and dramatically, with Desirée Migliaccio as Annina and Juan José Navarro as Dr Grenvil particularly excellent in the quintet. 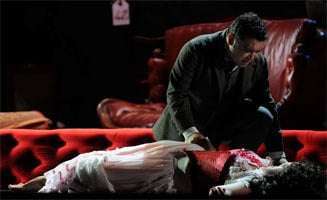 Bisanti conducted expressively during the First and Third Act Preludes, capturing their sense of impending tragedy. He favored large gestures designed to keep everyone together and in balance, in which he was generally successful. Particularly noteworthy among many fine instrumental solos was the clarinet accompaniment to Violetta’s writing her letter to Alfredo. The orchestra played admirably, effectively bringing out Verdi’s musical commentaries on the opera’s action, such as the distinctive change in the music’s character at a crucial moment to emphasize Germont’s meanness in telling Violetta that she would in time become old and unattractive and then would lose Alfredo anyway.

Edoardo Sanchi’s set places the drama at the center of a large space surrounded on three sides by tall walls papered in subdued tones with a floral pattern – perhaps an allusion to Violetta’s being the ‘dame aux camélias’ in Dumas’s play. Huge red curtains drop down to define smaller areas for scenes in Violetta’s and Flora’s Parisian homes, and the furnishings of Violetta’s country house sit on a platform that recedes through the raised rear wall as the scene changes to Flora’s salon. In the opening party scene an enormous upholstered red sofa bearing the women’s chorus glides forward to fill the curtained area and Alfredo and Violetta perch on opposite arms of this colossal couch as they sing the ‘Brindisi’ and reappears in disheveled condition when Violetta lays dying in the final Act surrounded by her scattered pieces of furniture, all bearing price tags.

Silvia Aymonino’s attractive costumes evoke the late-nineteenth/early-twentieth century rather than 1850. The floor-length red gowns worn by all of the women in the opening scene made quite a spectacle, but the uniformity of the men’s costumes melded one character to another – with the exception of Alfredo, who was prominent physically as well as vocally. Guido Levi’s lighting design was effective but unobtrusive except for the sudden brilliance of the overhead lights that illuminated the card tables at Flora’s dance party.

Ripa di Meana’s direction often had the singers in duets and small ensembles standing apart from one another and singing more to the audience than to the other characters. More interestingly staged were the large ensembles featuring the excellent Maggio Musicale chorus.