Pierre Boulez capped off his participation in Staatskapelle Berlin’s “Mahler: The Symphonies in Sequence” with a brilliant performance of the Eighth Symphony. Although the orchestra, vocal soloists and choristers filled the Stern Auditorium stage, which had been extended some fifteen feet, replacing the first four rows of seats, they fell far short of the forces suggested by the work’s sobriquet: “Symphony of a Thousand”. However, the performers generated a volume of sound that was quite sufficient to fill the Hall, thrilling the rapt audience time and time again. Nevertheless, one might have wished for a few more male choristers, a fourth harp and a real pipe organ, but this but this was no occasion to be greedy.

Mahler called this work a symphony, but it does not answer to any conventional definition of that term, and perhaps not even to the composer’s generously expanded usage in naming his other symphonic works. The Eighth is more like a cantata – a setting of the Latin hymn “Veni, creator spiritus” – followed by an oratorio – the final scene from Goethe’s “Faust”. Although there is no immediately evident textual connection between the work’s two parts, there is much shared thematic material, by which Mahler drew analogies between the ideas and emotions embodied in the two texts. Moreover, thematic links to the composer’s Symphony No.2 (Resurrection) also sheds light on what he sought to express in the Eighth.

Part One, the “Veni, creator spiritus” hymn, was performed with both tenderness and gusto as Boulez masterfully co-ordinated a huge orchestral complement with eight soloists, a double chorus and a boy’s chorus. The structure of the first part of the symphony is very much like that of a sonata form movement, with choruses and soloists introducing, and then developing extensively, several thematic motives. Boulez presented this material with great clarity, adhering closely to Mahler’s tempo indications and creating considerable tension as the development built to an extended and brilliantly performed passage in which both choristers and soloists literally added their voices to those of the orchestral sections to build a monumental fugue.

The concluding portion of Part One was remarkably performed, from the triple cymbal crash that launched the recapitulation of the opening “Veni creator spiritus” theme through gentle choral and instrumental passages and contrapuntal singing by the soloists to the beautifully managed segue into the “Gloria” by the boy’s chorus and, finally, the spectacular coda, with trombones and trumpets blaring from on high in the Dress Circle, joining the main forces to create an enormous and brilliant sound the likes of which is only rarely heard.

After pausing briefly to allow the soloists to reposition to the front of the stage, Boulez led the orchestra in a gripping rendition of the extended prelude to Part Two, depicting an eerie landscape, which the chorus described vocally immediately afterward. The various segments of the prelude showed off each of the sections of the orchestra, and linked thematic material from Part One with new themes that would recur throughout Part Two. Boulez evoked playing from the orchestra that was both accurate and charged with emotion.

Unlike Mahler’s use of the vocal soloists in the opening Hymn, in Part Two each of them depicts a character in the “Faust” drama, and each of these outstanding singers brought a distinctive characterisation to their performances. Stephen Gould had real Heldentenor heft in the role of Doctor Marianus, with a thrilling, if sometimes forced, quality at the top, and a glowing tone that shone through in passages that sat lower in his range, as in his last solo, “Blicket auf”. Bass-baritone Hanno Müller-Brachmann, a long-time ensemble member at Staatsoper Berlin, gave a bright and solid vocalisation of Pater ecstaticus, and Robert Holl as Pater profundus showed off a resonant bass voice that was marvellous at the top of his range, although one might have wished for him to show off a bit more of his vocal power at the bottom. 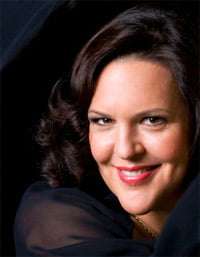 The standout among the three sopranos was Adrianne Pieczonka as Una poenitentium. Her voice was gleaming at the top and was rich and lovely across her entire range. She brought an excellent characterisation to her role – Gretchen in the Faust tale. Sylvia Schwartz sang the role of Mater gloriosa from high in the balcony, her penetrating voice floating downward with clarity and beauty. Christine Brewer as Magna Peccatrix sang admirably, with a brilliant tone quality that sometimes seemed a bit shrill. She was at her best in the trio with Michelle DeYoung, solid as Mulier Samaritana, and Jane Henschel, rich and expressive in her vocalisation of Maria Aegyptiaca. The trio, together with the orchestral passages that preceded and followed it, was one of the highlights of the evening.

DeYoung, who already had sung in two of the earlier performances in the present cycle and due to perform in “Das Lied von der Erde” on the evening following this concert, gave an outstanding performance, not only in the hymn and in the trio of penitents, but also in her last solo, “Vom edlen Geisterchor umgeben”, in which her voice blended marvellously with the orchestral accompaniment.

The choral singing was exemplary, with Boulez keeping everyone on track, but it was never better than in the “Chorus mysticus” with which the Faust text concludes, sung first ppp and then building gradually to ff with the final chord sung fff just as the off-stage brass enters to carry the symphony to its conclusion – yet another of those rare moments of shattering and glorious beauty.

The success of this performance seemed to flow directly from Boulez’s intense engagement with this work, which evoked brilliance from the performers whilst carefully adhering to the score. Boulez seemed involved and in rapport with the musicians in a way that had been lacking three nights earlier when he conducted the Sixth Symphony – the only one of the previous concerts in the cycle that I was able to attend. The audience and members of the orchestra seemed to feel this difference as well, giving Boulez a prolonged ovation.