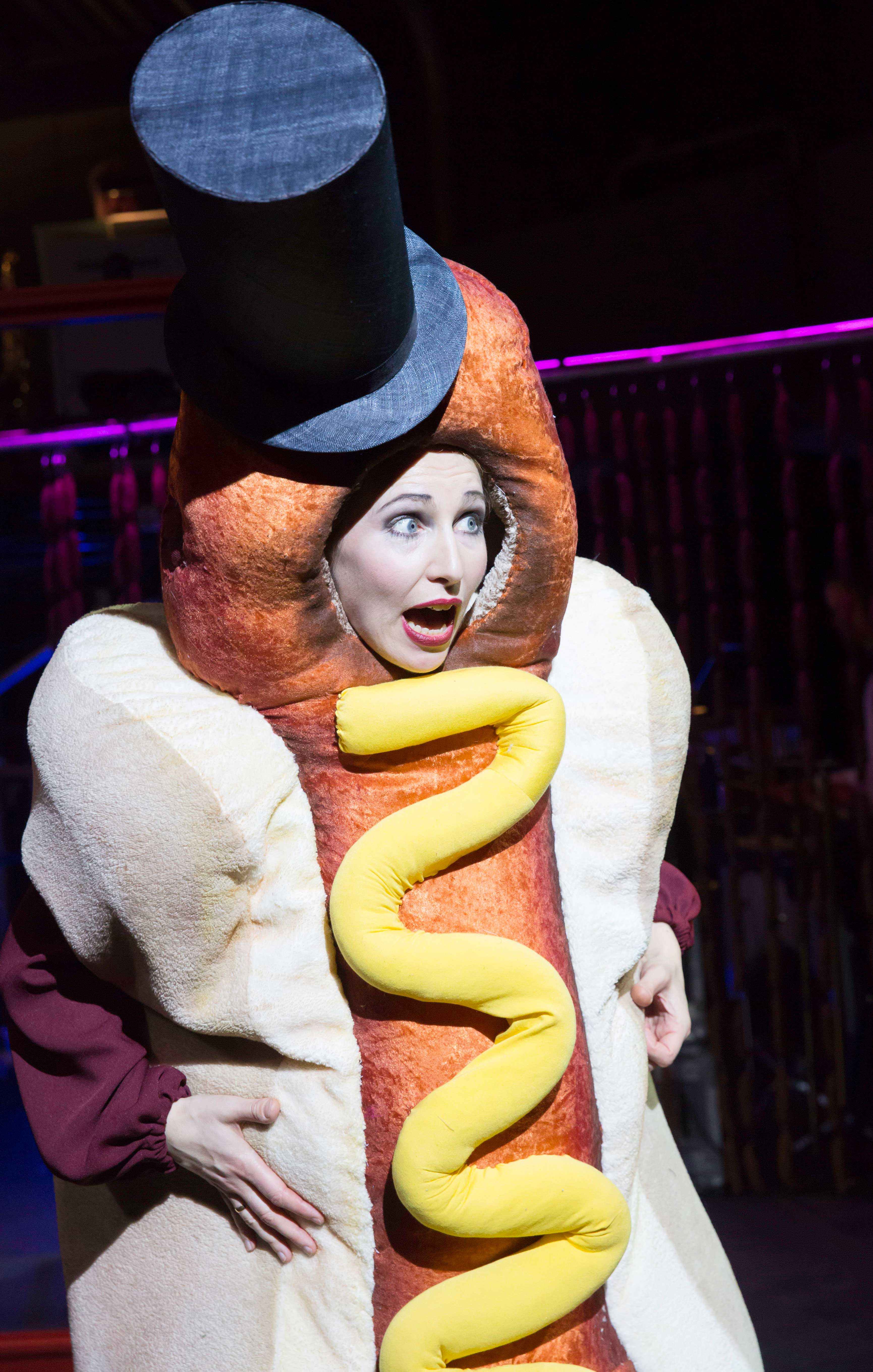 “The opposite of love is sausage”: this aphorism sums up HK Gruber’s cabaret or burlesque opera, Gloria: A Pigtale, chosen as the inaugural production by Mahogany Opera Group (formed from the merging of The Opera Group and Mahogany Opera). Ultimately it is ‘sausage’ which wins out – that is, the uncompromising, unavoidable fact of material, transitory existence, rather than the aspiration to anything beyond, such as love. Gloria the Pig has been ejected from her sty by her fellow swine (in both senses of the word) and looks for love. She mistakes the attentions of the Butcher for the real thing (he is only interested in “sausages, chitterlings and crackling”) but is saved, rather improbably, by the hapless, awkward wild boar Rodrigo (aka Rodney).

As an allegory or fairy-tale inhabited by creatures, the work suggests the influence of Animal Farm or The Cunning Little Vixen, though the political and social targets of Gruber and Herfurtner’s piece align it more closely with the former, than with the psycho-sexual preoccupations of the latter. Where the narrative allows, references are made to contemporary Britain, and so the Nazi tendencies of Gloria’s fellow pigs are neatly transmuted into a comment upon far-right politics generally, with Union Flag banners at this point sardonically promoting “British National Pork”. 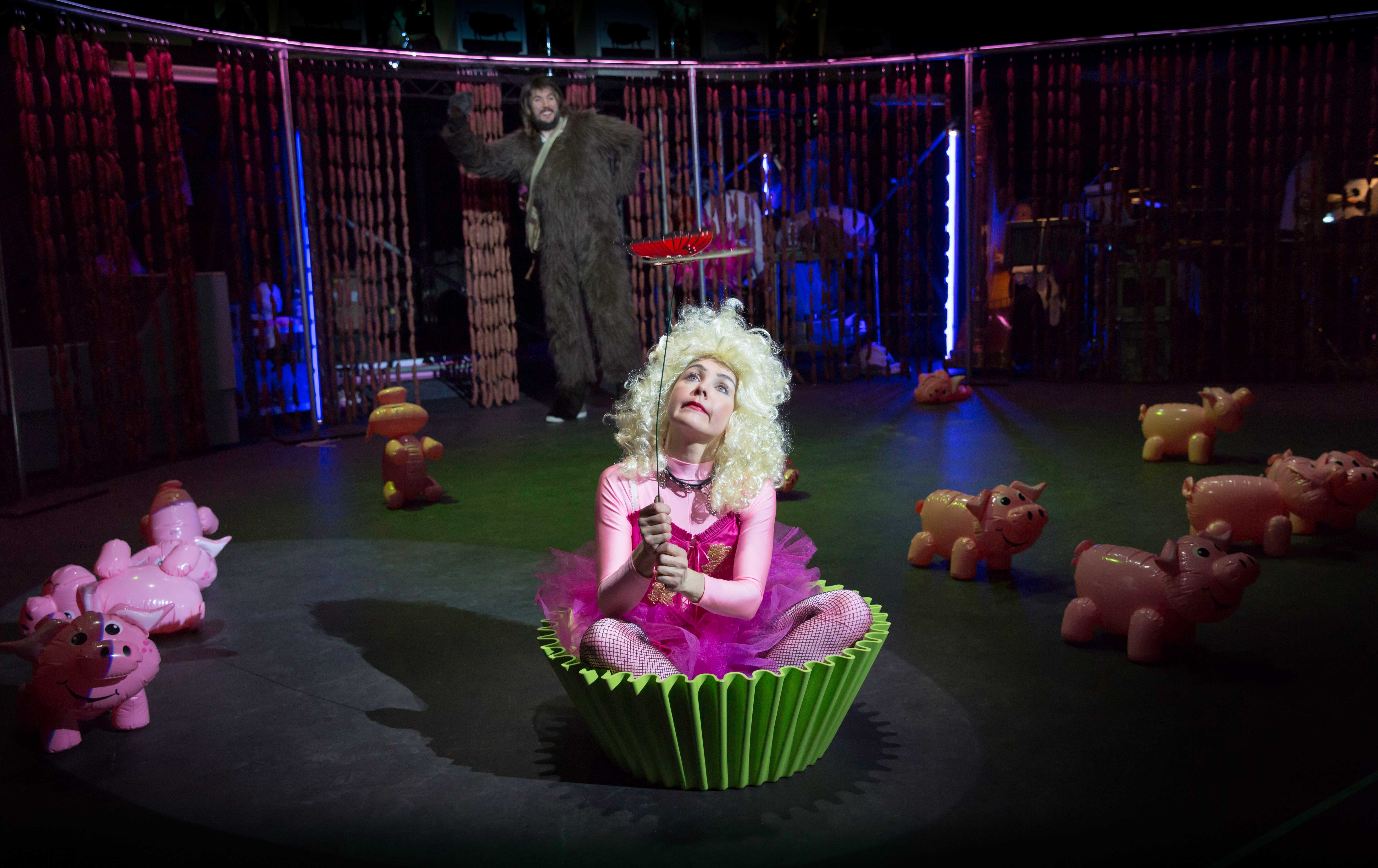 Like all good satire, tragedy is laced with farce, or rather, amidst the prevailing comedy lurks reminders of the bleaker side of life – the strings of sausages around the back of the stage, like fly-nets in a butcher’s shop, tell that the fate of all organic life is to end up as dead meat. This is made explicit at the end where Rodney, Gloria and family – lamenting the tedium of domestic life – are seen apparently roasting in an oven. It seems that all life is regarded as predestined to some sort of holocaust.

Having sung Zerbinetta on the main Royal Opera House stage, Gillian Keith brought all the vocal facility gained through that experience to realising the role of Gloria as a similar soubrette figure. Naïve, vain and shallow she may be, but it is essentially with her plight that the audience identifies, or at least sympathises. Keith’s signing was admirably secure in wide-ranging lines which recall not only Straussian coloratura, but also the expressionist drama of Schoenberg’s Erwartung or Herzgewächse.

Andrew Dickinson demonstrated notable versatility in adapting between greatly differing parts, especially between the vocally lustrous Fairytale Pig, of whom Gloria vainly dreams, and the coarse Butcher (stated emphatically to come from Leicester and not Leicester Square, though his delivery swung between East End, Yorkshire and Lancashire patois). Sion Goronwy was a suitably gauche Rodney, though his deep bass voice tended to obscure the words he was singing. Except for the vocal ensembles, this was the only significant instance where it became difficult to follow the dialogue – no surtitles were displayed. Otherwise the singers’ diction, individually, was a considerable achievement in its own right – and more so given the fairly constant choreography they were expected to perform simultaneously – as even far more established singers than they often give little regard to the clear projection of their words. Jessica Walker and Charles Rice were similarly adaptable, and a highlight of the performance was their duet as a pair of Hollywood Hotdogs, seemingly a send-up of the crass and artificial in popular culture.

CHROMA, under Geoffrey Paterson’s attentive direction, provided a continuous, mosaic-like accompaniment – at times almost a maddening mêlée which ensured that dramatic thrust did not lag. It seems unfair to single out any one individual from the excellent co-ordination maintained by a group of just nine musicians, but Edd (sic) Leach’s frequent underpinning of the whole sonority on tuba was indefatigable, suffusing the texture with an ideally tragic-comic ambivalence.