“Marilyn and Ella” – a musical drama written by Bonnie Greer 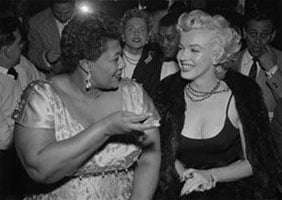 There could not have been two more disparate performers than Marilyn Monroe and Ella Fitzgerald, and yet they had a lot in common. Both were very shy, lonely characters unsure of their talents. Both were the products of broken homes. Both were sexually abused. But both were also strong. In an odd piece of show-business history both became involved in each other’s lives. Marilyn (1926-1962) had a short but eventful life as a movie actress, a career that lasted for barely a dozen years. Ella (1917-1996), however, had a singing and acting career that lasted some sixty years.

Both achieved greatness in their own way, although obviously Ella made more of a mark on the entertainment business than Marilyn ever did. When she died, Marilyn had only just started to be a really good actress (witness her last role in John Huston’s “The Misfits”), but we will never know just how good she might have become. She was created by the men of Hollywood and the media and ultimately killed by them too. Someone once said that Marilyn was born afraid and that she never got over it. 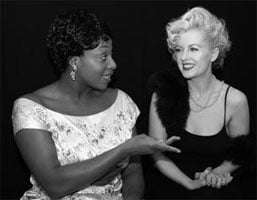 Ella Fitzgerald also had her problems, which had to do with her upbringing and being black. On the other hand, unlike Marilyn, she had a natural talent that needed no formal training and she was only interested in doing good work. If she questioned her own abilities, however, she still proved that her talent for singing popular-song was one of the greatest musical achievements of the twentieth-century.

Apart from all the great jazz recordings and appearances, you only have to listen to her Songbook series of recordings from the 1950s and 1960s to know that she was one of the best singers ever. Ella singing Cole Porter, Duke Ellington, Harold Arlen, Johnny Mercer, Irving Berlin, George & Ira Gershwin, Rodgers & Hart and Jerome Kern are the best interpretations of American popular song.

Bonnie Greer’s musical drama (previously on radio and at the Edinburgh Fringe) settles on a time in 1955 when Marilyn met Ella and was instrumental in getting her to play the Mocambo nightclub on America’s West Coast, a place that would not normally have played host to black performers. It’s hard to believe that an artist like Ella would be treated in this way, but then she recalls that black actress Hattie McDaniel from “Gone with the Wind” had to enter through the kitchen door to get in to the Academy Awards ceremony. Marilyn, who was in total awe of the jazz singer (“you’re the one who puts me to sleep at night! You’re the one who gets me up in the morning!) persuaded the owner of the Mocambo to book Ella for a week and also offered to be in the front row every night, something that would be great publicity for the club. Oddly enough Ella was also in awe of Marilyn because she desperately wanted to make it in the movies. Ella appeared in a few films, starting with an Abbot & Costello comedy “Ride ‘Em Cowboy” in 1941, but she mainly appeared in cameo roles, although her biggest part was in “Pete Kelly’s Blues” with Peggy Lee. However, as Lena Horne discovered, black singer-actress roles had to be confined to solo appearances that could be edited out for showing some states of America. 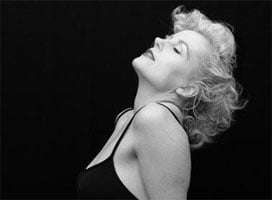 It’s an interesting albeit minor incident in both the lives of these women and Greer tells the story with sympathy and restraint and she admits she wanted to write an entertainment for everybody to enjoy. What is a delightful bonus is the roster of great songs, from the Gershwins’ ‘Someone to watch over me’, ‘I got rhythm’ and ‘They can’t take that away from me’ through Irving Berlin’s ‘Isn’t this a lovely day?’ and ‘Let’s face the music and dance’ to Cole Porter’s ‘I’ve got you under my skin’ and Rodgers & Hart’s ‘My funny Valentine’ and ‘The lady is a tramp’, which are all associated with Ella, but not forgetting ’Just two little girls from Little Rock’ and ‘Diamonds are a girl’s best friend’, which Marilyn performed in “Gentlemen Prefer Blondes”.

In Nicola Hughes’s Ella and Wendy Morgan’s Marilyn there are two great personality performances, although the Marilyn is the usual dumb blonde that has become a stereotype. Was she always like that? Accompanying the actresses in this two-hander play is a fine trio of jazzmen in Kevin Dunford and Leonard Aruliah under the guidance of fantastic pianist Warren Wills who has also done the arrangements. Colin McFarlane directs the show with a firm hand that never lets the performances go over the top. It’s an enjoyable evening about a small corner of entertainment history that might otherwise have gone unnoticed.