Turnage
Greek – opera in two Acts to a libretto by Steven Berkoff based on his play Greek, adapted by the composer & Jonathan Moore [sung in English, with surtitles and projections] 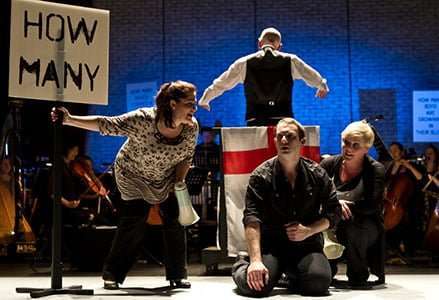 If it doesn’t exactly come up smelling of roses, Mark-Anthony Turnage’s and Steven Berkoff’s Greek has all the lacerating freshness that sandblasted audiences when it first appeared a quarter of a century ago. A revival of the 2011 Music Theatre Wales production in Brecon (with the same cast and conductor), Greek reworks the Oedipus myth, relocated to less fragrant (at least as they were in the 1980s) areas of north London. Berkoff’s original agenda was, not surprisingly, virulently anti-Thatcher, emphatically realised in Turnage’s music to combine into one of the totems of anti-Establishment, anti-opera-house opera, and now a venerable piece of agitprop to set against Turnage’s more amenable The Silver Tassie and Anna Nicole. The plague raging outside the city is evil capitalist greed, to which aspiration Eddy (Oedipus) is drawn, and much of the local 1980s’ colour hasn’t faded with time – indeed, it’s rather enhanced by dystopian images of last year’s Tottenham riots. Plus ca change.

Michael McCarthy’s staging and Simon Banham’s designs are functional, with the four singers performing for the most part in front of the 18-strong band, and the St George flag draped over the conductor’s podium spoke loud and proud of red-neck, football-crazed, “En-ger-land” jingoism. It’s a measure of the staging’s vigour that it helped lower resistance to the distancing effect of studiedly non-pc posturing in the potty-mouthed libretto, exaggerated estuarine accents and central-casting proletarian quaintness – which Berkoff apparently thought diminished his original play. 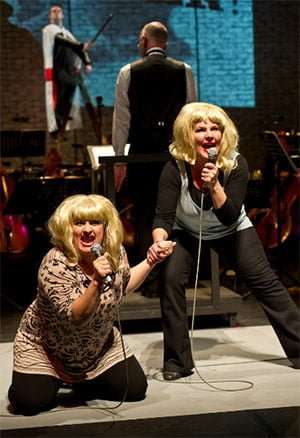 Marcus Farnsworth completed the process of persuasion – his Eddy is a tour-de-force, a role-filling performance that establishes the character as a twentieth-century British classic, as compelling in its way as Wozzeck. From the moment Farnsworth barged past the poor ticket girl into the auditorium, he was in complete command of Eddy’s volatile mix of violence, swagger, vulnerability and a dimly perceived visionary quality. Before the show, there was an announcement that Farnsworth was feeling ill, but this didn’t seem to impinge on the sheer physicality of his rendition, nor on the power of his singing. His kicking his natural father to death was cleverly choreographed, and his Act Two duet with his wife (his real mother) completely realised the music’s intimacy and lyricism.

The virtuosity and assimilation of styles in Turnage’s score are impressive – the declamatory and lyrical vocal lines flow in and out of the orchestra with deceptive naturalness, with all four singers on top expressive form – and Michael Rafferty and the MTW instrumentalists let you hear how Turnage’s music fits the drama with edgy, cartoon-like immediacy, its violence parting to reveal passages of sudden tenderness, stripped of its pervasive irony and powerfully underpinning the more overtly mythic feel of Act Two. I loved the sight of the players beating a tattoo on riot shields; I loved even more Eddy setting out to do battle with the Sphinx cloaked in the St George flag with a toy plastic sword, the Private Eye logo brought vividly to life.Do you know the Round the Horne Condensed Classics version of the Oedipus story? Jocasta pops her head round Oedipus’s bedroom door – “Don’t do that, Oedipus darling. You’ll go blind.”