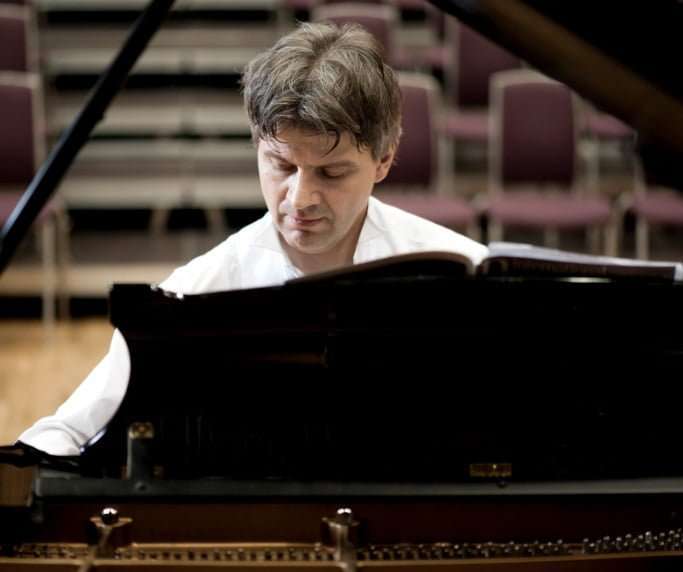 Few UK pianists have made such a feature of British music as Mark Bebbington: few, certainly, would have devoted a whole recital to such little-known repertoire – which duly began with one of the most-formidable and unequivocal works from the post-war era.

With hindsight, opening with John McCabe’s Tenebrae (1993) might have been too much of a good thing. If not the longest of his piano works, it is surely the most ambitious in running the gamut of technical challenges allied to a cumulative impact such as admits of no false compromise. Prefaced with the first of Liszt’s darkly luminous studies entitled La lugubre gondola (1882), Bebbington initially seemed a shade unfocussed in the McCabe, though it gained authority as it unfolded; the sepulchral initial stages building to a climax whose stark intensity gained perspective from the musing introspection into which the music subsides. With its inspiration in departed colleagues and Hermann’s Broch’s epic novel The Death of Virgil, Tenebrae is as finely wrought an instance of abstract piano-writing as has emerged over the past half-century.

Known primarily as a writer and a publisher, Robert Matthew-Walker is also a composer whose credentials (not least as a one-time pupil of Milhaud) cannot be gainsaid. His Third Piano Sonata (1980) is inspired by Shakespeare’s Hamlet: just how specifically the composer has not divulged, though it is not hard to sense a comparable narrative evolving over the work’s five sections – a peremptory introduction launching a tensile allegro that, followed as it is by a fluid scherzo then a powerfully rhetorical central episode, gives the earlier stages a volatile and questing demeanour analogous to that of the play in question. There follows a rapt nocturne (intriguingly melding elements of Busoni and Rachmaninov), followed by a coda as alludes to earlier ideas as the piece evanesces to a calmly speculative close. Across its 17-minutes, the writing is assured and idiomatic; the music as methodical in its formal trajectory as it is absorbing in its overall expressive ambit – thereby confirming Matthew-Walker (born 1939) as a proverbial ‘dark horse’ among British composers of his generation.

Two shorter and complementary pieces followed the interval. Richard Causton’s Non mi comport male (1993) comes from near the outset of his career, its five contrasted (while by no means disjunctive) sections amounting to a sequence of variations on the evergreen standard ‘Ain’t Misbehavin’’ that comes through insinuatingly towards the close. Just one reason why the title is not given in English, though behind this conceit is a work whose scintillating pianism and wry humour were amply to the fore in a highly attentive reading.

Ian Venables’s Caprice (2001) is audibly in the lineage of early twentieth-century French piano music, while being no less vital or appealing. Here a songful central section is framed by music whose rhythmic impetus is vividly maintained – in the latter instance, through to a surging climax which yet manages not to pre-empt the almost nonchalant coda. Another fine showing from Bebbington, who has previously recorded Venables’s Piano Quintet as part of a ‘portrait’ disc (Somm) which is worth investigation.

If only the last work had brought this programme to a fitting end. David Briggs’s Piano Sonata (2011) is nothing if not exacting in its pianism and flamboyant in its expression, but these are outweighed by its paucity of melodic content and a tendency to fall back on harmonic sequences (much of the chordal writing sounded as though conceived for the organ and then transcribed) that seemed determined to extend the music well beyond the point of overkill. The central slower span is too cloying to be affecting, with the rhetoric at the close not so much over-wrought as self-defeating. Bebbington projected it all with aplomb, almost choreographing the final bars as they headed to their thunderous conclusion, yet the abiding impression is of excessive technical resources expended on music of too little substance.

Such inconsistencies aside, this was a highly impressive recital whose technical challenges were taken comfortably in stride. Bebbington can only be applauded for having undertaken it, and will hopefully have the opportunity to tackle a comparable programme before too long.