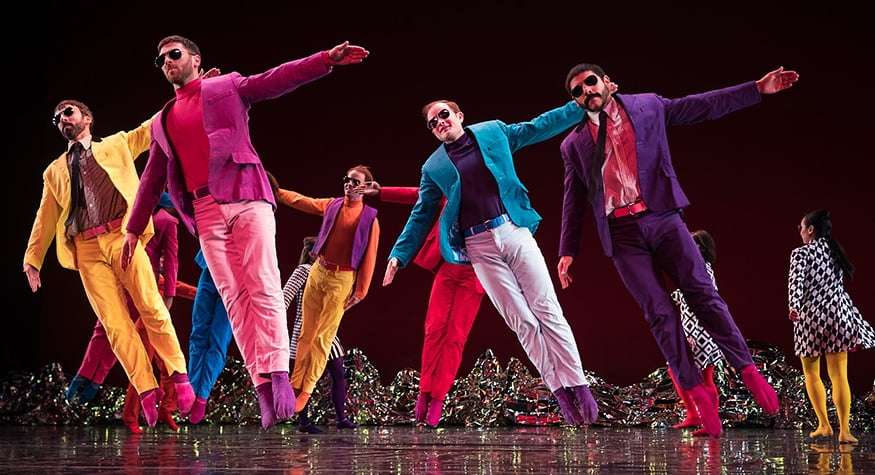 The best choreographers create a world of movement which utterly convinces, which possesses an internal logic in which you accept everything wholeheartedly. Pepperland, initially created in Liverpool in 2017, shows that the American dance-creator Mark Morris is one such choreographer; he has created a quirky, at times zany, reaction to the music of the Beatles in the album ‘Sgt. Pepper’s Lonely Hearts Club Band’ heard through the sound prism of composer Ethan Iverson’s creativity. It contains a glorious multiplicity of dance styles, from modern dance and ballet through vaudeville, soft shoe shuffle and on to Bob Fosse, the Charleston and cowboys’ hoe-down. That it works, and, indeed, works so well, is down to Morris’s inventiveness and his ability to match movement and music, which sounds all-too-obvious in print but which is a talent possessed by only a handful of those who style themselves as choreographers.

This is joyful Morris who, nevertheless, ensures that some of the thirteen numbers are shot through with something more: tenderness, melancholy, love and isolation. The eighteen members of his eponymously-named ensemble are able servants of their dancing master, effortless in their mastery if his quirky, catholic idiom, delightfully individual in their own movement qualities, for the MMDG is nothing if not a grouping of individual artists, each bringing their own particular flavour and accent to his dance-making, creating a joyously varied, cosmopolitan company.

Johan Henckens’s set design comprising what looks for all the world like an enormous scrunched-up tin foil sweet wrapper is striking in the way it reflects light and colour in Nick Kolin’s ever-changing lighting design, the backcloth washed with intense colours as one number follows another. The palette is picked up by Elizabeth Kurtzman’s technicolour costuming, blocks of almost neon brightness in sometimes clashing, sometimes complimentary blocks of colour, even down the dancers’ shoes. 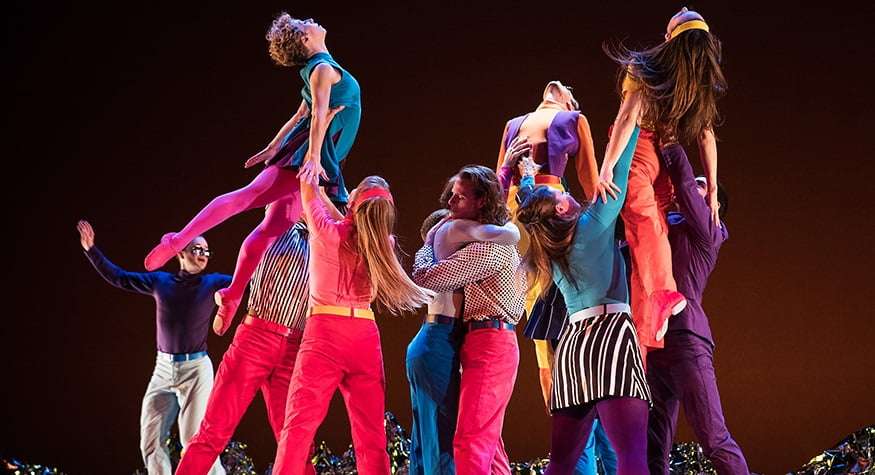 Underpinning it all is Iverson’s superb score, a mixture of rearranged Beatles numbers alternating with his own compositions, played and sung with real verve by the small ensemble of musicians – perhaps it is wrong to single out Clinton Curtis’s assured vocals and Rob Schwimmer’s evident mastery of the gloriously bizarre theremin. Iverson succeeds in bringing great changes of mood and style to the music, ensuring that nothing outstays its welcome.

Morris succeeds in wrong-footing his audience at almost every juncture, allowing his imagination to run riot with the music in what comes across as an almost spontaneous reaction to it. It feels as if his memories of films and shows, encounters and emotions, incidents and pure fantasy simply come together; the reality is more of an impeccably crafted work in which every entry and exit, every tilt of the head or flick of the wrist has been carefully weighed out and set down. This is not to say that there is no leeway for the performers, who clearly relish the opportunities to inflect Morris’s movement with their own body accent, which ensures that the entire enterprise retains a vitality and sense of freedom which are essential for the work to breathe. Morris’ choreography is full of wit and sly takes on the expected; it is, at times, representational, as in the mime accompanying ‘Penny Lane’, at others, resolutely abstract, yet always understandable. Pepperland is mostly about mood, always shot through with blazing humanity, and Morris is the master of raising the vernacular to the artistic, his dances accessible to all.