“They can’t take that away from me”
Music and lyrics by George Gershwin, Ira Gershwin and Irving Caesar 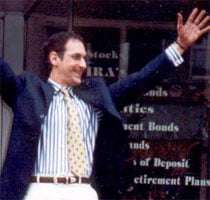 He’s been compared to Vladimir Horowitz, Danny Kaye, Al Jolson, Victor Borge, Luciano Pavarotti, Fred Astaire and Spiderman (Spiderman?) but in fact Mark Nadler is unique. As far as we know, he is the world’s only tap-dancing pianist, that is, playing the ivories at the same time as clicking his heels in a terpsichorean routine – oh, and singing. Something of a cult figure on the US cabaret circuit, and a brilliant show-off ever-ready to demonstrate his versatility, the Iowan-born Jewish entertainer has been in London before at Pizza on the Park and Jermyn Street Theatre with singer K. T. Sullivan. Here he gets to shine in his tribute to the music of George Gershwin. The expression ‘one-man band’ could have been invented just for Nadler and he sure works hard at what he does. He’s like Liberace but outrageous: he’s not so much as camp as a row of tents, but the whole damned jamboree.

Playing at Bellamy’s he likens the venue to a private party and that is the ambience that this pleasant and very elegant Mayfair restaurant seems to instil. With the piano centre-stage, in the middle of the room, the audience all around him, Nadler needs to keep on the move, so that everybody can see him at work. There’s no ignoring him because he generally only does loud, thumping away at the grand piano as if he is trying to strip it into pieces but in a brilliantly virtuoso style and at top speed. When he calms down, however, he can demonstrate a truly passionate, romantic side to his playing and with Gershwin’s sublime music he cannot go wrong. In less than an hour he manages to get through two dozen songs, interspersed with stories about Gershwin and his life.

As Bellamy’s is a fairly small room for cabaret, no member of the audience is safe from the marauding hands or wit of Nadler. If you are a pretty young woman, you are likely to be invited onto the piano stool for Mark to serenade you Gershwin-style. Apparently the former song-plugger cum composer used to write a song for his chosen lady using her name. However, the next night he’d do the same again, with a different girl’s name but to the same tune. If you are seated next to the piano, as your reviewer was, you are likely to become part of the show, as he was. And, if you are Neil and Christine Hamilton or Steven Berkoff, who was instrumental in bringing Mark to London, you will be welcomed with open arms. However, if you do not react at all to Mark Nadler’s humour, then you will be compared, as one stone-faced couple was, to the jury at the Nuremberg Trials.

The music that Nadler presents is a constant cornucopia of Gershwin from the title song of Mark’s show through ‘How long has this been going on?’, ‘Embraceable you’, ‘Fascinating rhythm’, ‘Somebody loves me’, ‘Lady be good’, ‘They all laughed’, ‘Strike up the band’, ‘I’ve got a crush on you’, ‘Of thee I sing’ … the catalogue of great numbers goes on and Mark Nadler salutes the talents of the composer and his brother Ira, who wrote most of the lyrics for George’s songs, by singing and playing as many of them as he can in his allotted time.

As a bonus (?) there’s the tap-dancing into which Mark is liable to break at any moment. Jumping up on the stool and then reaching down to the keyboard to keep the accompaniment going, he shows an amazing feat of footwork that demonstrates his undoubted versatility.The set finishes with a medley of ‘S’wonderful’ and Rhapsody in Blue, a hybrid that shows both sides of the Gershwin talent – the popular tune-smith and the would-be classical composer.

Would the world have had more of both types of music had Gershwin not died at the tragically early age of 38? The jury will always be out on that one and we must be grateful for the enormous legacy of work that the Gershwins left us. Mark Nadler, in his distinctive way, is promulgating these talents that are only too well demonstrated in the brothers’ songs. Mark’s encore is ‘Love is here to stay’, the last music that George wrote to which Ira later added lyrics: a fitting tribute to two giant talents of American music.