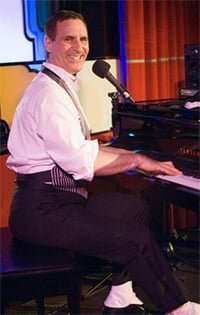 An entertainer of prodigious ability, Mark Nadler can not only sing beautifully and play piano, but he has a masterly flair for story-telling, a well-honed sense of humour, and can dance up a storm with a rousing mixture of tap and Charleston. He’s introducing a new act subtitled ‘Songs and Scandals of the Roaring Twenties’, a showcase for his talents as well as providing cabaret-goers with an informative and entertaining set which manages to be risqué and even shocking without being offensive, the tone set with his opening number, a combination of ‘Running wild’, which Nadler makes clear he intends to be, interspersed with amusing Mae West stories. Nadler points out that ‘The Roaring Twenties’, generally regarded to have finished with the Wall Street Crash of 1929, in fact extended to 1933 and the end of Prohibition, during which there were 32,000 speakeasies operating in the USA, and when night-clubs, frequently owned by mobsters, flourished.

Many of Nadler’s tales involve “sex, drugs and booze”. He regales us with fascinating stories of this colourful era and with various personalities, including Texas Guinan, Elizabeth Welch, Cab Calloway and Libby Holman, the latter introducing the song ‘Moanin’ low’ and who for publicity purposes claimed to be half-black. She married into society (much to her in-laws’ distress) and later probably shot her husband – she claimed it was suicide until it was revealed that the victim was left-handed and had been shot in his right side. Nadler’s observations include that a woman obsessively in love is sexy, while a man in the same state is a stalker. His song selections are a delightful mix of the familiar and the rare, the soulful and the suggestive, such as Eubie Blake and Andy Razaf’s classic piece of double entendre, ‘My handy man’, and Cole Porter’s lament of a street walker, ‘Love for sale’.

He segues from that number into a beautiful rendition of ‘Body and Soul’ delivered with a sincerity and simplicity that rivals the version by Mel Tormé. Nadler gives a lot more besides in a 90-minute routine. He unearths a rare early song with a melody by George Gershwin, ‘Limehouse nights’, which he couples with Philip Braham and Douglas Furber’s irresistible ‘Limehouse blues’ and has fun with Cole Porter’s ‘Find me a primitive man’, with its delicious couplet “I don’t want a man who belongs to a club but the kind that has a club that belongs to him.” It was delightful to hear the lyrics of Jimmy Johnson and Cecil Mack’s ‘Charleston’, invariably performed as an instrumental to coax people on to the dance floor, and Nadler acknowledges that during the ‘twenties Germany was even more decadent than the US, Bertolt Brecht one of the country’s most subversive talents, with a selection of numbers from Kurt Weill’s The Threepenny Opera – the German-language version of ‘Mack the Knife’ is a joy. Nadler suggests that ‘The Roaring Twenties’ were pretty wonderful, especially for those whose conscience allowed them to be naughty, his verdict seconded by Irving Berlin’s admonition in 1922, ‘Pack up your sins and go to the devil’ who Nadler convinces has all the best tunes, particularly when purveyed by such a consummate showman.