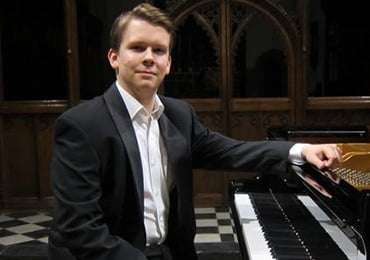 Mark Viner is Chairman of the Liszt Society so it was fitting that his Wigmore Hall recital included this composer. Berlioz completed Benvenuto Cellini in 1838 but it wasn’t well-received, and in 1851 Liszt offered to revive it and suggested some changes. Berlioz reworked the opera, and the new version was performed in 1852, and then in London in 1853, but also less than successfully. In 1854 Liszt produced the paraphrase that Viner played, approaching it with grandeur and giving it a particularly reverential opening. It was a treat to hear it.

Alkan’s set of Trois morceaux dans le genre pathétique, notable for having no dynamic markings, was written in 1837, the year that Liszt produced his Douze Grandes Études (later revised as the Transcendental Studies). ‘Aime-moi’, despite fine colours, underscores that Alkan is often a rather formless composer; nonetheless it is a diverting caprice. Whereas ‘Le Vent’ has an eerie opening. Viner controlled his pedalling carefully to avoid blurring the right-hand chromatics with the left-hand chordal accompaniment, but again Alkan’s writing suffers from a poverty of invention. The final piece, ‘Morte’, begins promisingly with the ‘Dies irae’ plainchant and the tolling of a bell, both in the bass register. Viner voiced this very nicely. However the piece doesn’t fulfil its promise, and turns out to be a lot of fuss that goes nowhere: it concludes with a characteristic, sudden and denigrating fortissimo smash.

Following the interval, Thalberg’s Fantasy on Themes from Moses. For all its grand title and quarter-of-an-hour duration, Thalberg selected just two of Rossini’s ideas – a chorus and a prayer – and, never short of ego, added material of his own. Thalberg is fortunate to have an advocate such as Viner, whose sensitivity and musicianship raises the tawdry writing – repetitive figurations, predictable alternations between chord and arpeggio sections, and highly conventional harmonic progressions – above the level it deserves. Viner let go in a couple of flourishes, but for the most part he played with restraint, exhibiting a wonderfully delicate touch.

Chopin’s Nocturnes Opus 48 are a strange pair. Viner opened the C-minor rather stridently, not with the super-soft mournfulness and tragedy that one might prefer. The central chorale-like section was not controversial; but then, in contrast to the opening which was not caressed enough, the final part, marked agitato, did not have half the restlessness it needs. But Viner gets top marks again for his pedalling, clean and sensitive, but one habit to watch is the lifting of the hands off the keys before clearing the pedal, thereby surrendering all control of the sound; this often results in a nasty twang as the dampers return, which can be mitigated if the hands are still in place. The second Nocturne, in the distant key of F-sharp minor, had a lovely singing line, and it is a pity that it is not heard more often.

Finally Liszt’s impossibly grand Réminiscences de Norma, a fantasy on seven themes from Bellini’s 1831 opera. Unlike Benvenuto Cellini, Norma was in no need of Liszt’s help to ensure its success. This is among the most taxing of operatic paraphrases, and Viner was in full command, controlling the pounding octaves of the G-major march-like theme sensibly. There were moments of pure magic, especially in the long central dolcissimo section, which was admirably unhurried. However it was a pity that the arpeggiando con grandezza that follows was given an explosive extra bass B growl, vulgarising the entry of this sublime section: that note did not exist on the piano in 1844, but that should not give performers licence to add it. Some of the passagework was messy, containing mistakes that would have been avoidable if control of tempo hadn’t been relinquished. And the most difficult section – martellato, marked Presto con furia – was unnecessarily chaotic, being attacked far too fast, although it should be noted that on his excellent recording Viner does neither of these things. But these are comparatively small quibbles, and the music lapsed happily into E-flat for a less-turbulent recap of the B-major section. Then Liszt, in a turn of genius, re-introduces the march-like theme, and the two are heard concurrently. Viner’s clarity was again in evidence and he brought the work to a triumphant conclusion.

Viner obliged with an encore, Cécile Chaminade’s La Lisonjera (The Flatterer, Opus 50) – a perfectly pleasant trifle recorded by the composer in 1901, and then by Leopold Godowsky and Yolanda Mero – was given charmingly by Viner and provided an unchallenging comedown from the heady drama of Norma.