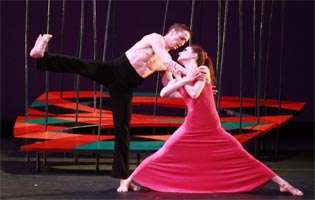 The Martha Graham Dance Company presented three of her classic ballets for which the sets were created by the Japanese-American sculptor Isamu Noguchi (1904-1988), who collaborated with Graham on more than twenty works. This performance was part of Carnegie Hall’s JapanNYC Festival, but it was given at Frederick P. Rose Hall, the home of Jazz at Lincoln Center. JapanNYC, under the artistic direction of Seiji Ozawa, is bringing to New York audiences a wide range of Japanese art and culture. The festival, which began last December, resumed this month and is dedicated to the victims of the earthquake and tsunami. 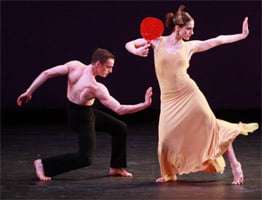 Martha Graham, an iconic figure in twentieth-century American dance, established an idiom as an alternative to classical ballet that continues to influence through her work with such as Margot Fonteyn, Rudolf Nureyev and Mikhail Baryshnikov and through her pupils, including Merce Cunningham, Paul Taylor, Twyla Tharp and Pascal Rioult. Graham also taught her techniques of expressive body movement to many actors – Bette Davis, Kirk Douglas, Gregory Peck, Eli Wallach and Joanne Woodward, among others. Graham worked regularly with prominent artists in other disciplines. The present program illustrates her collaboration with Noguchi and composers Aaron Copland, Samuel Barber and Carlos Surinac, and she also commissioned scores from Paul Hindemith, William Schuman, Gian Carlo Menotti, Wallingford Riegger, Norman Dello Joio and Carlos Chavez. The Martha Graham Dance Company is celebrating its 85th-anniversary season. It went through difficult times after its founder’s death in 1991 (at the age of 96). It succeeded, after protracted litigation, in establishing its ownership of the copyrights to nearly all of Graham’s 181 dance compositions, and has preserved Noguchi’s original sets and other properties associated with Graham’s creations.

The eponymous locale of the amusing and erotic “Embattled Garden” is the Garden of Eden, which Noguchi represented by a circular platform from which a number of flexible vertical rods rise and, across the stage, a stylised tree with several flexible branches. As the dance begins, Adam and the red-gowned Eve are discovered on the platform whilst the serpent-like Stranger is hanging upside-down on the tree, beneath which lies Lilith – who, according to some legends, was Adam’s first wife. Adam and the Stranger are clad identically in black from their feet to halfway up their torsos. Lilith, dressed in yellow, snaps her fan repeatedly beneath her raised leg as she and the sinuous Stranger insinuate themselves into Adam and Eve’s previously peaceful environs. The Stranger bites Eve on the neck and what ensues includes seduction, passion and jealousy – emotions that are strikingly portrayed in Graham’s choreography. In a particularly dramatic moment, the Stranger forces Eve backward over the bent knees of the supine Lilith, who ties a red ribbon around her rival’s dangling hair, perhaps representing Eve’s tasting of the tree’s forbidden fruit. 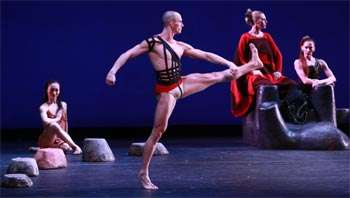 The score for “Embattled Garden” by the Spanish-American composer Carlos Surinac is quite colourful and appropriately varied, but it would not have much interest as a concert piece. Samuel Barber’s score for “Cave of the Heart” also succeeds in creating a variety of moods. It could also stand alone as a concert piece. “Cave of the Heart”, the first of several Graham ballets based on Greek mythology, tells the story of the sorceress Medea, beginning at the point in Euripides’s drama where Jason, whom Medea married and helped to gain the golden fleece, has abandoned her in order to marry the princess of Corinth. Noguchi’s tripartite set includes a series of five stepping-stones on which the scantily-clad Jason and his trophy wife cavort whilst Medea seethes with jealousy crouched on a serpent-shaped platform beneath a metal structure resembling a bare-branched bush (which takes on a very different aspect at the end of the ballet). Even when nearly motionless in her metaphorical cave, Orihara made Medea’s anger quite palpable. Beginning on a platform at the centre of the stage, the shape of which suggests a heart or perhaps an open hand, the Chorus reacts with horror – our horror – at the coming tragedy that she is powerless to avert. Leaping directly upward, she covers her face as if to avoid watching the unfolding events. During the ‘dance of vengeance’ that is the focal point of the ballet, Medea spits out a red ribbon that symbolises her intense jealousy. Although we do not see Medea kill her own children, Graham spares us little else of the horrific events. Medea murders the Princess with a poisoned crown and deposits her shroud-wrapped body before a grieving Jason. Then, as the backdrop is bathed in red, Medea dons the metal structure as a garment representing her cleansing by fire as she surrenders herself to her father, the Sun. 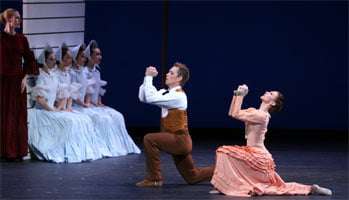 “Appalachian Spring” is Graham’s most famous ballet to Aaron Copland’s Pulitzer Prize-winning score. Distinctly American in subject matter, music and choreography, the ballet depicts the wedding day of a young couple who are establishing a home on a frontier farm in the mid-nineteenth-century. Noguchi’s simple but superbly effective set does little more than suggest the outline of a farmhouse, which has only a single exterior wall and a platform on which there is a slim Shaker rocking chair. A section of fence rail and a low boulder complete the set. Although created during World War Two, the ballet exudes almost unbridled optimism. The openness of the set is suggestive of the open frontier and its unlimited possibilities. The characters show their commitment to the hard work and faith that will be required to tame the land; and the music reflects the joy with which they anticipate a prosperous future. The opening procession introduces a Revivalist, a Pioneer Woman, the Husbandman and Bride, and the preacher’s four young Followers. The Husbandman is self-assured as he establishes his new family and home, and his loving Bride shows a deeper reverence than the fire-and-brimstone Revivalist, whose Followers hang on his every move. The most interesting character is the Pioneer Woman, whose precise relationship to the others is unclear, but whose supportive presence brings an aura of confidence to the younger pioneers. Just as Copland’s music makes reference to American folk-tunes, Graham’s choreography draws on indigenous dancing idioms, including several square-dance moves. The Shaker hymn “Simple Gifts” figures prominently as the couple’s celebratory dance, and aptly epitomises the spare aesthetic of the sets and choreography.

These three ballets demonstrate how well the visions of Graham and Noguchi meshed. Both eschewed nonessential ornamentation in favour of simple and abstract shapes and movements calculated to bring out the essential elements and emotions that connect each story and its characters to our common human experience.

It is regrettable, but understandable, that nowadays virtually all modern-dance companies face financial constraints that generally prevent them from dancing to music performed live. It is less clear, however, why the Martha Graham Company did not even identify the recordings used.