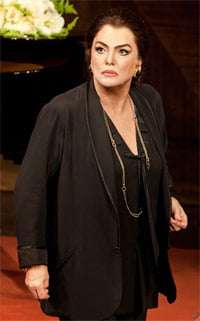 The Greek-American soprano Maria Callas was, arguably, or not even arguably, but definitely the most famous opera singer in the world and is likely to remain so. Even people who never go near an opera house have heard of her, be it through her spectacular rise to fame in an astonishing musical career or through the press coverage of her private life which was unorthodox to say the least. Callas changed the face, literally, of the opera diva, from the overweight figure with the big chest voice to the slimmed-down version. She also became a true dramatic actress in her operatic roles at a time when acting came second to vocal ability. Rarely back then did singers look or act the parts they were playing.

By working with the likes of Herbert von Karajan, Franco Zeffirelli and Luchino Visconti, she managed to broaden her range which gave her the freedom to sing the whole gamut of the opera repertoire. Not only could she be a brilliant Brünnhilde, using her lower, deeper register to full effect, but she could also manage Elvira in Bellini’s I puritani, with its coloratura writing – she sang both in Venice in 1949. This laid her career open to a huge repertoire with all sorts of roles in the bel canto repertoire. She was a hard worker; at the Conservatoire she was always the first to arrive and the last to leave, was a quick learner and could seemingly provide brilliant results at a moment’s notice. However, this was her grounding in the work ethic: she worked hard for her place at the top of the operatic tree. 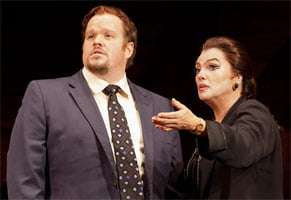 It’s possible that she spoilt her voice through overuse and extending its capabilities with sheer force. She had, however, a very distinctive timbre. The sounds she made were not always pretty, for she had a dramatic voice with an edge that was at times harsh but decidedly thrilling too. Sadly she died far too young in 1977 at the age of fifty-three, the voice worn out possibly through her strict diet but the personality remained of a tough character who had been through the mill, had led a hard life with regrets that her family, particularly her mother, were not initially more supportive. Thirty-five years on her recordings still sell. Best forgotten maybe is her private life including her affair with Aristotle Onassis which started while she was still married to Giovanni Meneghini, who was an enormous support and influence on Callas’s early career. Onassis provided a reason for her not to continue working as a performer but the Greek millionaire eventually abandoned Callas for Jacqueline Kennedy, leaving Callas stranded and reclusive.

In 1971 and 1972 Callas held masterclasses at the Juilliard School in New York, which music students could attend and learn from ‘La Divina’. In 1995 American playwright Terrence McNally formed a play out of his impressions of the workshops which opened in New York with Zoë Caldwell as Callas. Later, Patti Lupone took over the role and brought the production to London. This current production with Tyne Daly comes from a successful season in Washington DC and on Broadway. 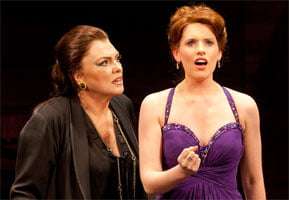 Whether McNally’s view of Callas is completely true, few will ever really know, but he does give us what we would expect of a grande diva imparting her knowledge to the students; she is very critical of her young charges. They are totally in awe of her, nervous, and not knowing how they will be treated. She makes no concessions to putting them at their ease. They are here to work and if anything untoward occurs she questions: “Is this a classroom or a circus?”.

Generally speaking this Callas is not happy with the appearance of her students. “I needed a look and I got one”, she says, not caring whether she is insulting them or not. When the mezzo student arrives in full evening gown, she asks “Are you going somewhere?”. Her attitude may be one of being cruel to be kind but, after all, Callas had a hard upbringing and had to do everything herself to achieve success. However, she warns us and her students that, although she may bark, she never bites.

Tyne Daly (of Cagney & Lacey fame and among many other fine and award-winning performances) recreates the persona of Callas with the requisite star quality. Daly has great stage presence and she gives everything she has to the performance. She is not required to sing at any great length, although she talks her way through one aria and trills another. The students provide the real singing in arias from Bellini’s La sonnambula, Puccini’s Tosca and Verdi’s Macbeth, managed with clearly defined artistry. Generally speaking she approves of their performances. Even her long-suffering pianist, Jeremy Cohen as Emmanuel Weinstock (“Are you Jewish?” she asks without apparent guile) gets the occasional good word.

There are flashbacks where she remembers her past – performances at La Scala and her frustrating relationship with Onassis. Here Daly really comes into her own, in monologues backed by the voice of Callas. It is a charismatic performance by Daly in Stephen Wadsworth’s subtle production that really shows the meaning of what star quality is all about. Maria Callas had it and Tyne Daly has it too.