The Red Shoes – Ballet to choreography by Matthew Bourne based upon the film of the same name by Michael Powell and Emeric Pressburger, itself based upon Hans Christian Andersen’s fairy-tale [world premiere] 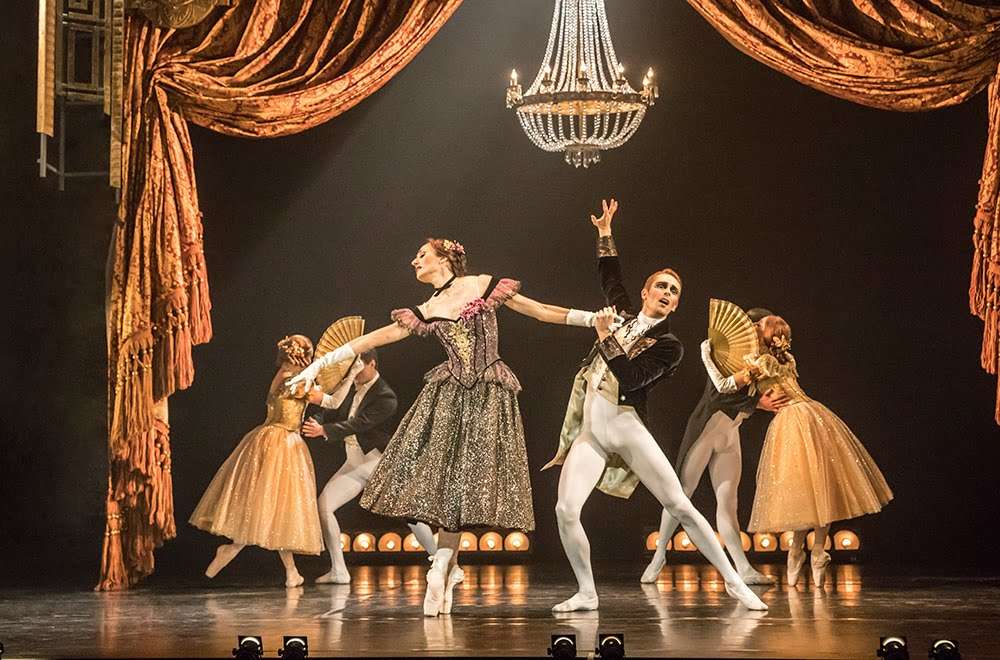 For Matthew Bourne, The Red Shoes has been a project twenty years in the making, a dream to be fulfilled, and, in many ways, the culmination of his now long career as a creator of dance. The iconic film of the same name, Powell and Pressburger’s 1948 masterpiece (itself inspired by Hans Christian Andersen’s fairy tale) influenced a whole generation, bringing ballet to the general public in the same way as The Great Caruso with Mario Lanza did for opera; it is a story about the absolute nature of art, the need for artists to give themselves totally to their art form.

Bourne’s new show, opening officially at the Sadler’s Wells, is a paean to the dance and, perhaps strangely for this dance-theatre choreographer, Classical Ballet. As a result, there is far more ‘pure’ dance in this show than in many of his others, and a need for his dancers to deliver virtuoso steps. That these talented dancers are not Classical Ballet performers gives a wonderfully period feel to the show, their present-day technique perhaps a little redolent of the level of the great performers from the film. Bourne has created a typically slick and accomplished work, running at a family-and-transport-friendly two hours all in, and providing strong narrative and spectacle in equal measures. If a criticism is to be made, the pace of the first half slackens at times, not least in a slightly over-long Les Sylphides rehearsal section and the second suffers from a rush on the narrative – the move towards the work’s dénouement is insufficiently explained to make sense to someone unfamiliar with the film. 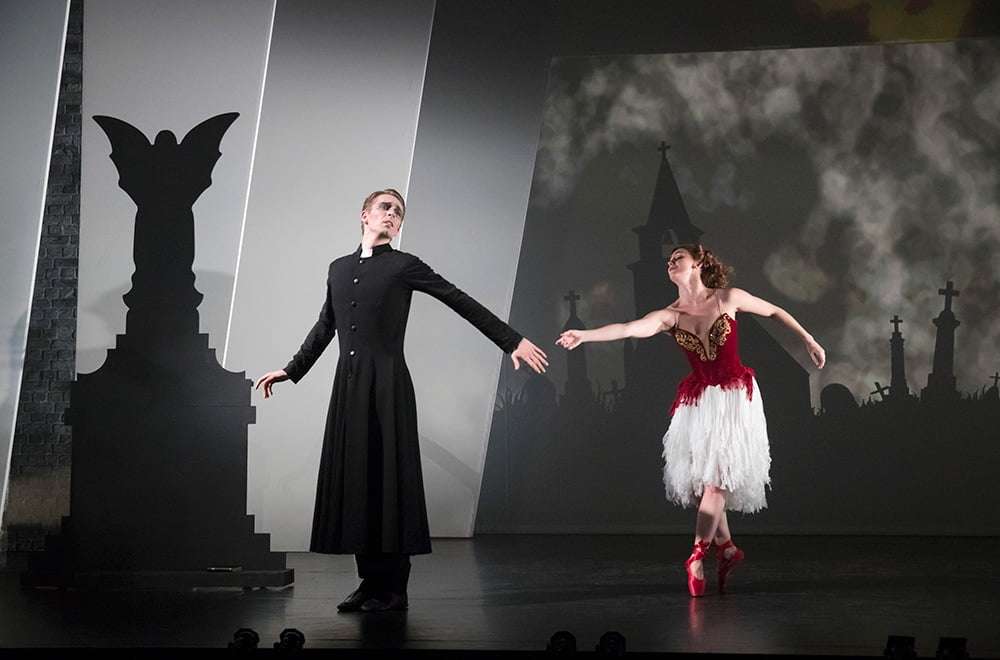 It looks stunning in Lez Brotherston’s artful setting and costumes, not least of which is the proscenium arch which not only descends and rises but spins and can travel across the stage. This makes for an easily-changeable setting and, crucially, effortless transformations between performance and backstage of the famous Lermontov ballet company. A white setting illustrated by Duncan Mclean’s projection is where ‘The Red Shoes’, the ballet-within-the-ballet, takes place, but such is the efficiency of the design that all is changed in a matter of seconds.

Another key to the success of this new work is the choice of Bernard Herrmann’s music orchestrated by Hermann, a Hollywood composer known for such films as Citizen Kane, Fahrenheit 451 and North by Northwest, amongst others by Alfred Hitchcock. His is an inspired choice and this pot-pourri of ‘danceable’ sections form a variety of films, makes for an admirable sound setting, containing a number of different dance forms evocative of various settings and periods. The orchestra, perhaps amplified a notch too much, delivers the score with verve. 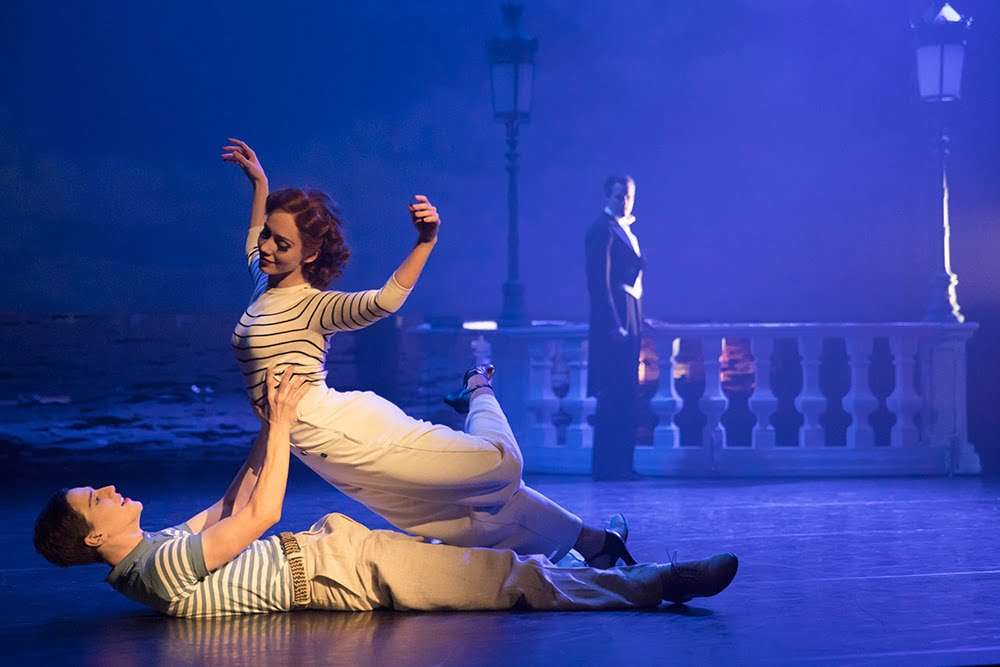 Bourne’s choreography shows his evident love both for the story of The Red Shoes itself and the whole world of larger-than-life artists and creators which is shown in the film – Lermontov is Serge Diaghilev, the uncompromising impresario, who made dancers not only into household names but also into artists of legend: Nijinsky, Karsavina, Lifar, Dolin. And of course, Diaghilev/Lermontov was not only interested in the dancing, but equally the design and the music, and thus the story involves the talented composer Julian Craster, taken up by the impresario whose love for Lermontov dance protégée Victoria Page causes a rift and forces a choice on her as to what she should choose – her love or her art. 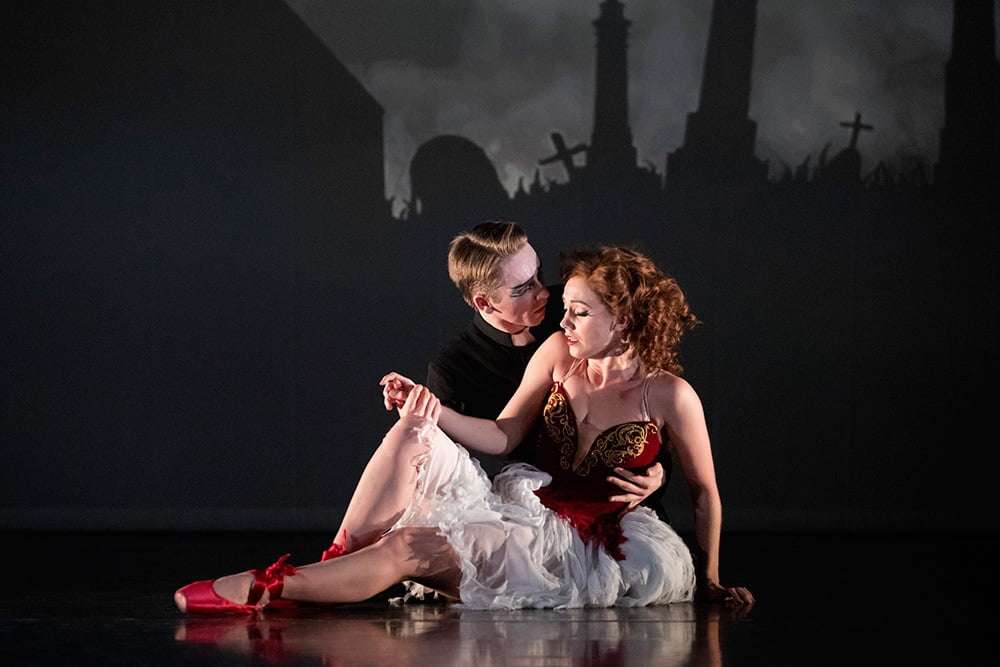 Bourne’s choreography shows greater variety than perhaps ever before. Yes, he can still deliver first-class comedic vignettes such as the wonderfully deadpan Egyptian sand dance in an east End London music hall and the hilarious sight of prima ballerina Irina Boronskaja rehearsing her solo in fur coat and high heels, holding her sylph dress in various poses around the stage (the rehearsal style of one very famous British ballerina of yore), but he has delved into the styles of different ballet choreographers of the past, so there are affectionate nods at known ballets – Nijinska’s Le Train Bleu and Les Biches for the Ballon de Plage, Lifar’s mythological ballets and Ashton’s Dante Sonata for Concerto Macabre, as well as recognisable quotes from dancers in rehearsal (Coppélia and Ashton’s Les Patineurs, amongst others). When doing pure ‘Bourne’, the choreographer shows great ease and fluency, creating solos and duets of intense emotion. 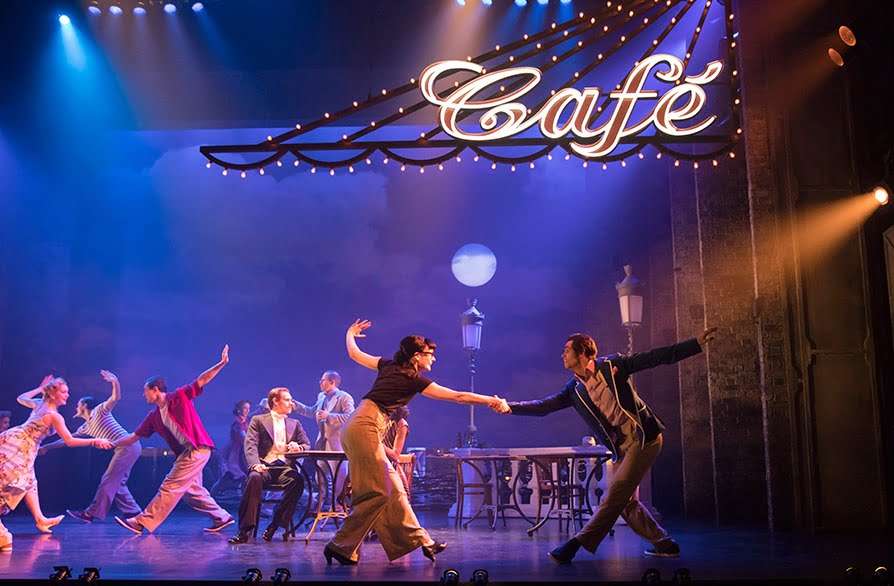 Bourne’s dancers are superb. Led by the adorable Ashley Shaw as Victoria Page, who has a melting back and expressive arms, the whole company deserves praise. Liam Mower as the camp premier danseur Ivan Boleslawsky relishes the virtuoso challenges of his steps as well as the characterisation of the role originally done on film by Robert Helpmann. Sam Archer made for a suave but brooding Lermontov, Dominic North was a suitably intense Julian Craster and Glenn Graham an intense Grischa Lyubov. There was among the entire cast, a palpable knowledge of period and the requisite style, style of walking, of sitting, of looking even, which succeeded in creating the requisite atmosphere for this tale to work.

Bourne’s The Red Shoes is not an attempt to put the film onto the stage, rather a new interpretation of it born out of both deep love and knowledge. It is a fine addition to his canon, and deserves to take its place as one of his most popular shows.