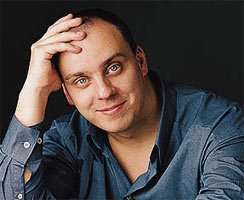 Matthias Goerne and Pierre-Laurent Aimard have worked together for some time. When Aimard appeared for this recital he looked deathly pale – all the more shocking as only a few weeks ago he was looking hale and hearty. He’s a superlative player but on this occasion, it was evident that something was seriously wrong. I thought it might have been a problem with the piano, as the keys seemed to stick. But the Wigmore Hall piano is so lovingly pampered.

Sloppy Aimard’s playing certainly was not, but it was uncharacteristically stiff and strained. He laboured, sometimes inadvertently nudging side keys. He was best in ostinato passages where his fingers could lift off completely. Longer, flowing sequences were muffled. This was not the usual lucid, precise Aimard for whom Schumann would normally pose no problems. Afterwards I found out that he had a severe shoulder injury and was in extreme agony.

Fortunately, Goerne was in good form. The lower register for which he’s famous, doesn’t lend itself to facile frippery, so he’ll never be an ‘easy listen’ populist pin-up boy. Yet his dark notes are mellowing and developing ever-richer colours, the softer shadings particularly beautiful. Low- to bass-baritones can descend to monochrome darkness, which is why they so often turn to operatic roles where they can exploit the magisterial grandeur of the voice type. The Lied is far more of a challenge, as its primary values are subtle nuance and thoughtfulness. Goerne has been developing his softer, lighter register so that it’s now become a distinctive feature of his style. In the seldom-heard “Requiem”, he hovered barely above a whisper, yet the words carried authority. This is much more difficult to achieve than some might think. The song is not a lullaby for the dead: it’s a dignified, unsentimental statement of faith.

“Liederkreis” (Opus 39) is a collection of vignettes. In ‘Waldgespräch’, a knight meets a beauty in a forest. Too late he discovers she’s a witch and he’s trapped – “Pelléas et Mélisande” in miniature. Again, the secret of singing this successfully is to lure the listener into the spell before revealing the punch line. Thus yet more understatement from Goerne. There’s more to these Eichendorff settings than meets the ear at first. Schumann understood the undercurrent of mystery that runs through them, and so does Goerne. For example, in the two songs both titled ‘In der Fremde’, the scenery being described is lovely, but what makes the poet sad, and gives the songs their kick, is the poet’s lost people he loves.

Even more mysterious is “Kernerlieder”. This cycle is a tour de force and Goerne has made it something of a personal trademark. There are lethally difficult passages here; sudden leaps from very low to very high, contrasting the masculine and feminine elements. The girl become a nun. She’s dizzy with ecstasy, so suddenly the vocal line shoots painfully upwards.

Many singers cheat by trying a kind of falsetto. The girl is attractive because she’s so pure and innocent: the kind of jarring screech so often heard really doesn’t do at all. But Goerne makes the vertiginous leap smooth and convincing; he has the vocal flexibility to shift registers seamlessly. It’s superb technique, too, for he’s been building up towards it almost imperceptibly. When it comes, it’s as natural as speech. Goerne has thought through what happens emotionally inside the song, and uses his voice to bring it out.

“Kernerlieder” is also a Goerne speciality because the cycle is very tightly written, like a miniature symphony. At first, there doesn’t seem to be much narrative-relationship between the twelve songs, but what unites them is the underlying musical structure. And there are other more subtle connections. ‘Stille Liebe’ and ‘Stille Tränen’ are a matching pair, the second a development of the first. Yet they are separated so the rationale isn’t that obvious. Unusually among singers, Goene listens avidly to orchestral music; hence his ability to hear ‘beyond’ the texts. Had Aimard been on form, this could have been a very interesting performance indeed, as he, too, has a great feeling for musical architecture.

Aimard is a brave man, willing to risk further injury by playing; and he has a gruelling schedule. It was also instructive to watch the way Goerne and Aimard communicated. Goerne was listening, even shaping his singing so it distracted from the problems in the piano part, Goerne glancing supportively at Aimard, to reassure him. That’s finesse. A few years ago Goerne smashed his leg in an accident just before a recital with Alfred Brendel. It must have been hell to stand and sing for 90 minutes. At the end, he hobbled awkwardly off, Brendel holding him up. If you only get your music through recordings, you miss this essential human side of music.