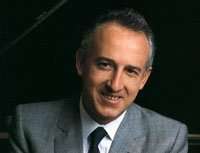 London’s concert-goers were out in force on this night. Salonen conducting Mahler 3 was a virtual full-house in the Royal Festival Hall, while Maurzio Pollini’s recital was completely sold out and there was a healthy queue for ‘returns’. Pollini’s playing of Chopin isn’t to all tastes. His integrity and lack of picturesque suggestion may eschew the salon but it also brings a powerful strength to weld sections across the whole. Yet there’s no lack of feeling and dynamic contrasts were thoughtful and sustaining; not for Pollini a chance to view the landscape and smell the flowers but an opportunity to create a varied panorama that presents Chopin as a master structuralist and harmonic innovator.

Pollini’s chosen piano was a Steinway, one personalised by the name of Fabbrini; one assumes this to be name of the technician that had prepared the instrument for the pianist. Pollini began his recital with a wonderfully dreamy account of the C sharp minor Prelude that perfectly caught its improvisatory quality, the sort of fluid playing one would expect later in the evening when Pollini’s hands were totally warmed, his fingers completely unlocked and his senses fully engaged. Pollini doesn’t do sentimental, but this rendition was full of meaning, as was the Ballade, its sections interrelated and with force generated from within. A beguiling sense of ‘distance’ informed the opening of the first Nocturne and Pollini’s exact balancing of chords revealed some unexpected ‘forward-looking’ harmony; the second, very familiar Nocturne was new-minted.

Pollini’s honesty of intent occasionally caused him a few technical gripes; the Scherzo was swallowed whole, fingers not always responsive to Pollini’s requirement for incisive articulation, but the ‘trio’ was as noble and cascading as could be wished for and, as elsewhere, dynamic variance and subtle changes of touch were the hallmark of masterly musicianship. The Polonaise had its ‘war-horse’ association off-loaded in favour of a sprightly dance, emphasis and direction finely poised. Chopin featured twice in Pollini’s three encores; the so-called ‘Revolutionary’ Study (the last of the Opus 10 set) and the first Ballade, the latter a generous ‘extra’ that was played with inwardness and inexorable growth.

The recital’s second half was devoted to Liszt beginning with four of his visionary late pieces, all short in length but important in anticipating musical developments of the twentieth-century. Spare and elusive, Nuages gris presages Impressionism, so how well chosen was Pollini’s first encore, Debussy’s ‘The Engulfed Cathedral’ (Preludes, Book I), and what a rapt account Pollini served up, the climax swelling without imposition. The Liszt group included Unstern, which seems to anticipate Bartók (and not through shared nationality) as well as those disturbing miniatures that conjure funereal bells, black lapping waters and, in R.W. – Venezia, a chilling presage of Richard Wagner’s demise.

Liszt’s Sonata in B minor is a pinnacle of Romantic piano literature. Pollini has long been a rigorous interpreter of it and was so here. His 26-minute traversal of a work that averages to about 30 is one aspect of his directness. While some bars could have expanded more, the sheer logic of Pollini’s approach made everything part of the whole; even the most reflective passages were perceived as an opportunity to gather strength rather than being an interlude and the climaxes were resplendent. The bass of the piano growled, the treble was ethereal, Pollini seemed to be creating a Marriage of Heaven of Hell and the fugal section held the tail of the devil and was akin to an exorcism. Rarely have the final pages belonged to the whole with such certainty and the final bass note was allowed to linger into infinity (or would have done but for an over-eager applauder despite Pollini’s right-hand making it clear that silence should prevail). Nevertheless, it was a remarkable account of consummate import.