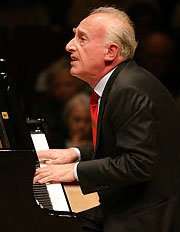 A quintessential Pollini programme (he played Book II of Debussy’s Préludes coupled with Chopin at the Royal Festival Hall in 2003) that was generously extended by three encores. For a rather private person, Pollini certainly could not be accused of being niggardly with his public, and hopefully he enjoyed the genuine warmth and appreciation of the capacity audience.

Overall it was an outstanding recital, yet even the very greatest artists sometimes suffer from nerves. Kreisleriana got off to a distinctly splashy start but, after some reassuringly human fallibility, Pollini found his equilibrium. Where he brings something special to Schumann is in the voicing of inner parts so that, rather like a Samuel Palmer painting, the score seems to teem with an inner life that eludes many other pianists – in such moments as the epilogue at the close of the inward (Sehr innig) second section and in the probing account of the Wiegenlied-like sixth. Pollini also made much of the work’s elusive endings – the fifth and seventh pieces close with what are almost musical question marks – whilst the final one skips off into the middle distance as though spinning out of earshot.

Chopin’s four Mazurkas, collected under Opus 33, form a particularly well-contrasted group, ranging from the brief and elliptical G sharp minor, from Pollini the most profound of statements, to the extended B minor that alternates grandeur and meditation, its hypnotic final reprise ushered in by an ostensibly simple left-hand passage for which Pollini found the ultimate in finesse. All too easily the First Scherzo (also in B minor) can seem like an assault course. By contrast, Pollini underlined its affinity with bel canto through his discriminate revealing of inner parts in the slow central section and his teasing out the moments of quietness in between the barnstorming climaxes; this was a reading to remind of the Italian meaning of ‘scherzo’ (a joke) with its overtones of caprice and whimsy.

Pollini’s DG recordings of Debussy’s Préludes have been criticised in some quarters for standing outside of Debussy’s soundworld. Nothing could be further from the truth. With his own complex mix of public and private persona and his extraordinary tonal control, there are few pianists better equipped than Pollini to do justice to this music, which mixes interior worlds, such as ‘Des pas sur le neige’ (No.6) – here intensely memorable for its control of micro-dynamics – and extrovert brilliance, such as ‘Les collines d’Anacapri (No.5). Whether the slow, hieratic contained power of ‘Danseuses de Delphes’ (No.1), the Scarbo-like danger of ‘Ce qu’a vu le vent d’ouest’ (No.7), the musings of ‘Le sérénade interrompue’ (No.9) – interrupted by the strummed self-quotation from ‘Ibéria’ (Images pour orchestre), its throwaway ending touched-in to perfection – or the effortless ascent to the tolling climax of ‘La cathédrale engloutie’ (No.10), this was playing of supreme penetration.

Three encores followed: the Tenth (in F minor) of Liszt’s Transcendental Studies, Chopin’s ‘Revolutionary’ Study (the last of the Opus 10 set of Études) and the same composer’s Ballade in G minor (Opus 23), all magisterially given.