“A Night in Berlin” 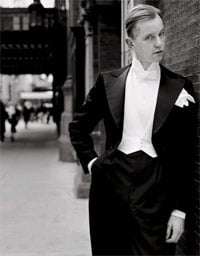 Well established in Germany since its 1992 hit “Kein Schwein ruft mich an” (Not a soul ever calls me), the Berlin-based Palast Orchester with vocalist Max Raabe has since gained a loyal international following. This concert marked its third visit to Carnegie Hall, which was filled to capacity, with nary a German word heard in the audience. Performing hits and cabaret from the 1920s and 1930s divided between German and English standards, and even a Spanish song (“Duerme”), the ensemble has managed to appeal to a sense of nostalgia across different cultures.

The “Orchester” more accurately is a 12-member Big Band – one female violinist (Cecilia Crisafulli), and eleven men playing various instruments and even singing. While the pianist sticks to his grand, the set drummer also has various percussion instruments to his disposal, including a progressively collapsing set of tubular chimes in “Rosa, reizende Rosa”, the bass player also switching to Sousaphone, and the guitarist plays the banjo as well, and even the violin. The wind section of fluegelhorn, trumpet, trombone, and four saxophones (two alto, one tenor, one baritone) is even more versatile. The trumpeters also play trombone, the trombonist occasionally picks up a viola, and the saxophonists are terrific clarinetists too; on top of that the baritone player is a flutist and vocalist (as are the brass players). 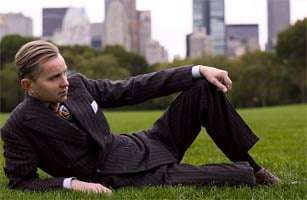 All of them are exceptional musicians, perfectly capturing the sound and spirit of 1920s’ variety orchestras. No arranger is credited, but the program notes imply that some of the music was found in flea markets and libraries. Michael Enders is listed as Musical Director, and perhaps it was he who refined and re-fashioned these discoveries into the group’s highly sophisticated and creative arrangements, such as transforming Franz Lehar’s “Dein ist mein ganzes Herz” from a standard operetta aria into a Tango. The ever-changing combination of instruments added a variety of character to the different numbers, with one exception: the lone violin more often than not doubled the melody line in a high register, which soon grew tiresome and even annoying.

As impressive as the instrumentalists are, the star of the show remains a tall, thin man with slicked back hair, dressed in the most elegant tails, Max Raabe. Even when he is reclining against the piano, out of the spotlight, his presence still asserts itself; and when he steps up to the microphone to sing, standing there nearly motionless, his long arms by his side, he takes total command. And with his deadpan delivery of a few well-chosen ironic lines between numbers, in heavily accented English, he is a testament to the power of understatement. Raabe is the kind of performer who can bring down the house with one word, or a raised eyebrow.

While he speaks in a resonant baritone, his singing voice ranges from that low register to the finest tenorial crooning and a well-trained falsetto. In Friedrich Hollaender’s “Ich bin von Kopf bis Fuß auf Liebe eingestellt” he almost reached soprano territory as lead singer in a five-voice arrangement, while in Walter Jurmann’s “Ninon” he showed that he could hold his own with only piano accompaniment. Equally at home with German and English standards, Raabe’s interpretive talents are perhaps shown to best advantage in ironic songs, such as Cole Porter’s “Miss Otis regrets”, or Robert Stolz’s “Salome”. He announced it as “an Oriental Foxtrot … which doesn’t exist … but if you listen to it you will hear … an Oriental Foxtrot!” An enthusiastic standing ovation produced two encores, but regrettably not their signature “Kein Schwein ruft mich an”, which has become a cult classic.