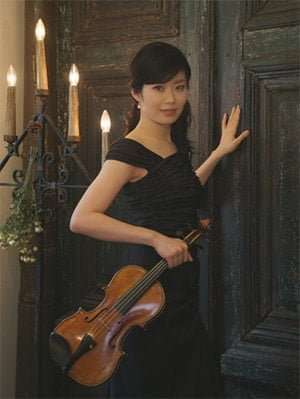 Both a recital and a CD launch, the Shostakovich common to both, the evening opened in Baroque style with a Sonata (from 1743) by Jean-Marie Leclair in which Mayuko Katsumara showed a strong, accurate technique and a good sense of style, but her tone quality was not particularly ingratiating and her playing was somewhat lacking in personality. Nigel Hutchison accompanied in that reticent, almost apologetic manner often produced by pianists in music written for the harpsichord.

In the Grieg Sonata, the last of his three for violin and piano, Hutchison became more of a partner than an accompanist, and there were moments when his strong technique overwhelmed Katsumura’s not very big sound. Both musicians showed more feeling in this very beautiful, open-hearted work, but in those passages where Grieg gives his players scope to express that vein of wistful charm that characterises so much of his writing, the response was disappointingly routine in expression. All in all, it was an efficient performance, rather than one that showed any depth of imagination.

After the interval, matters improved and we heard a work for unaccompanied violin by the English composer Benjamin Ellin (born 1980). Its three movements depict thoughts of Ellin’s past, his reflections about the present and hope for the future. It is an attractive score, laid out for the instrument with expertise and ingenuity, containing some engaging rhythmic devices in the opening ‘Molto furioso’, expansively long lines in the ‘Molto cantabile’, and an upbeat final movement entitled ‘Full of Spirit’, which contains further intriguingly rhythmical hops and skips. Katsumara responded adroitly to the work’s technical demands and gave an enjoyably enthusiastic performance.

In the Shostakovich (written for David Oistrakh), there was immediate evidence of a much deeper sense of concentration and a close rapport between the performers: no doubt gained from the experience of recording the Sonata (newly released with these artists on the Green Room Productions label, the coupling being the same composer’s Violin Concerto No.1, with the LSO) and resulting in an interpretation that is now well bedded in. The dark emotions of the music seemed in particular to suit Katsumura – her deeply committed response to the intense introspection of the opening Andante was very impressive, and the two players bounced effectively off one another in the spiky, almost manic Allegretto. The lengthy Largo finale must make excessive demands on any players’ abilities to sustain atmosphere and concentration, but Katsumara and Hutchison did so superbly and also gave everything in their spectacular cadenzas.

The Shostakovich would have made a rather downbeat ending to the recital, as Katsumara observed in a brief and witty address to the audience, so she then brought the evening to a more contented close with a nicely shaped account of the ‘Méditation’ from Massenet’s opera Thaïs.