Mendelssohn
Elijah, Op.70 – Oratorio in two parts to a text by Julius Schubring sourced from Luther’s translation of the Bible [sung in the English translation by William Bartholomew, working from the Authorised Version of the Bible]

Size isn’t everything in the oratorio firmament, but in the case of Mendelssohn’s Elijah, it can inject enough hell-fire to direct attention away from some moments of less-than-incandescent inspiration – as powerfully demonstrated in London performances from Kurt Masur in 2009 and, spectacularly so, from Paul McCreesh at the 2011 BBC Proms.

This performance was a much smaller affair, with a classical orchestra of 45 and a choir of 34 having their work cut out to deliver apocalyptic adverse weather conditions and the prophet’s heavenly relocation in a fiery chariot, but it gained a great deal in immediacy and intimacy. Elijah, full of edifying vengeance, smiting, doubt and redemption, is probably way down the list of oratorios being lined up for opera-house dramatisation, but it was still illuminating, to say the least, to hear so vividly how Mendelssohn referenced Bach and Handel as well as the Old and New Testament parallels, in a way that would have had an instant connection with his religion-literate audience. 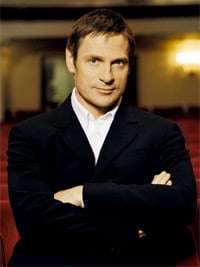 Much of this was recreated with great success, by the soloists especially. Simon Keenlyside (who was Elijah in the Proms performance) may not have a Charlton Heston-type prophetic heft to his lower voice, but in all other respects it was a towering performance – intelligent, intensely communicative, and in the prophet’s moments of doubt, accessibly modern. Whether as a full-on avenger, or in his tender dialogue with the Widow, or in his baiting of the followers of the false god Baal, Keenlyside was completely in sympathy with the role. He stretched the boundaries of oratorio tradition, and the result was visceral – not an adjective normally associated with Mendelssohn.

Catherine Wyn-Rogers’s light mezzo dovetailed neatly with Keenlyside in the Widow dialogue, and she was in fine smiting mode as the crafty, no-good Queen Jezebel. Again, like Keenlyside, she teased the stiffness out of expectations, to moving effect in her Angel aria, ‘O rest in the Lord’.

Lucy Crowe had no specific characters to draw, but she radiated angelically in her aria ‘Hear ye, Israel’, gracefully sung, with quietly gleaming tone and a light vibrato. Andrew Kennedy’s rather wider vibrato took us back to standard oratorio certainties, as did his tenor’s lyrical Englishness. The treble William Carne had a bit of a crack at the Youth’s first ‘There is nothing‘, but otherwise he was excellent, and incredibly intense in ‘the storm rusheth louder and louder’ – a long way from the cherubic piety of ‘O for the wings of a dove’.

The chorus was superb, lightly athletic and expressive in the contrapuntal passages – we’ve probably all been blasted by walls of baroque-style fugue in Elijah at some time – and singing with terrific panache and volume in the people’s prayers to Baal. The chorus also fielded an unaccompanied trio of angels of great luminosity, giving us a hint of Victorian sweetness.

A lot of Mendelssohn’s characteristically febrile orchestration didn’t register that strongly, but you couldn’t fault the attack of the Britten Sinfonia. Andreas Delfs compensated for his smallish forces with generally quick and edgy tempos, and his sense of pace worked wonders in the closing numbers, where the music loses some of its dramatically original form.