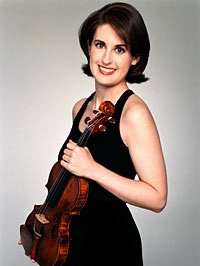 The string-players are the principals of the New York Philharmonic. The musicians’ flawless technique and ability to effortlessly communicate their interpretive intentions between themselves with a minimum of eye contact were evidence that they are world-class artists.

The concert began with the Mozart Duo was written as a favor for his friend Michael Haydn, who was unable to complete a commission for six such duos due to illness. The piece has an unusually complex viola part, yet without a bass line to anchor it, the work comes across as lacking substance. Sheryl Staples brought a beautiful full tone out of her Guarnerius Del Gesu instrument, as rich in the pianissimos as in the glorious fortissimos. Cynthia Phelps was able to portray the importance of each note in the accompanying figures, thus keeping the listener’s attention focused on the viola part at all times, not an inconsiderable feat. In all, the two performers gave a thoughtfully considered interpretation.

Ravel’s String Quartet, written while the composer was a student at the Paris Conservatoire, initially received mixed critical reviews, and Ravel’s teacher, Fauré, was said to have described the last movement as “badly balanced … a failure”. The work is notable for its technical complexity and richly evocative colors, and the performers managed a discriminating performance that showcased their nuanced playing to the finest degree creating a well-blended sound and their finely gradated crescendos did not give away too much too soon, thus allowing the climaxes to have that much more impact. The musicians’ seamless passing of the arpeggios between parts in the first movement rarely distracted from the melodic lines, making the interpretation as a whole seem exceedingly well planned. Michelle Kim’s tone was not as warm as that of Staples, but the lower strings were able to rival Staples’s exquisite timbre. The only real shortcoming was the distraction of the restless and noisy audience; a ringing phone marred the beauty of a pianissimo in the third movement.

The concert concluded with Brahms’s Piano Quintet. Brahms had begun this work as a string quintet, then, in part due to the reservations of his friends, he revised it twice, with the piece taking its present form after a version as a sonata for two pianos. The piano and strings have equal importance, with thick textures required of the string section, yet in this performance guest-pianist Yefim Bronfman’s harsh sound overpowered the strings, whose finely attenuated playing did not suit this dramatic piece as well as it did the Ravel. Bronfman’s staccato playing and his phrasing seemed at odds with the string section, particularly in the unison lines of the first movement. In the softer sections of the second movement, the strings seemed to disappear altogether under the piano, and Bronfman never managed any real legatos, his playing seeming quite insensitive in style. Bronfman’s heavy playing was less of a detriment in the dark scherzo, yet his mechanical manner of attacking repeated notes was in stark contrast to the wonderful diversity Cynthia Phelps had brought to her accompaniment in the Mozart The pensive, chromatic beginning of the finale, highlighting the reason Schoenberg once called Brahms a “modernist”, was performed with a real sense of anticipation by the strings yet, in the passionate Allegro section, the strings frequently seemed to be holding back the emotional intensity needed to make a truly outstanding performance.