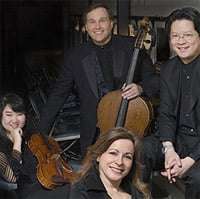 The Miami String Quartet was formed nearly two decades ago, and has a well-deserved reputation, particularly in new and under-performed repertoire. Benny Kim substituted for Ivan Chan, the quartet’s regular leader. Kim plays a 1742 Stradivarius and blended well with second violinist and violist. Keith Robinson’s burnished, lush cello sound, especially the warm and robust in the instrument’s lower register, creates an impressive foundation for the group.

The first movement of the Haydn was a little too poker-faced, and a little more variety from the theme-and-variations second movement was needed, but impressive with the austere non-vibrato sound (except for some sparing vibrato in the third phrase) when the theme returned at the end. The very brief Minuet had a pleasing touch of gypsy bite, and the finale was exciting – and an impressive demonstration of the players’ precision.

Latvian composer Pēteris Vasks is often, and unfairly, lumped into the same category as Arvo Pärt and the recently-late Henryk Górecki. Yes, Vasks, a double bass player, is an unabashed neo-Romantic whose music employs rich modal harmonies, austere textures, and sweeping melodies – but is also not afraid to meld dissonance and even aleatoric techniques to strongly musical effect. The opening sound of his Third String Quartet is a high A in the first violin – a gesture that sets the stage for the tension and calm in the slow music that follows, especially the strongly characterized cello portamentos that create sudden shifts in mood from calm to tension. The second movement, an Allegro energico with frequent changes in time-signature, crackled alternately with manic energy and rhythms reminiscent of eastern-European folk-music; the slow third movement has been compared to the quartet music of Shostakovich, but there are also flashes of Ustvolskaya and Vainberg in this elegiac, reflective music . The finale begins with the highest possible sounds, from which emerges a transformation to the chorale music from the opening movement. This quartet is one of the most enjoyable such work of the last few decades, and given the Miami members’ engaged, involved performance, it’s clear they love this piece.

It may be a personal bias of this writer, but I’ve never warmed to Robert Schumann’s string quartets. That having been said, there were a few surprises in this performance – the “jigsaw puzzle” sonorities that open the first movement Andante as the opening theme emerges in sparingly scored fragments, are a bold musical gesture, and the players doesn’t try to paper it over as clumsy, instead making the music sound decades ahead of its time. The second movement’s faster music had real momentum, and the Un poco adagio central section moved along and with more energy than I have heard elsewhere. The sonorities Adagio molto are similar to the slow movements of the composer’s Third (‘Rhenish’) and Fourth symphonies, and the musicians put forth gloriously rich sonority framing big-hearted cantabile melodies. The finale can be too underpowered as music, but the Miami players found more elegance in this music than is customary.