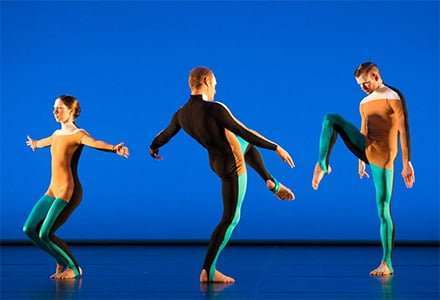 In the world of new British choreography, it is not always the youngest or the latest that are the best. Michael Clark, the ex-bad boy of British dance and famous for outrageous shows in the 1980s in particular, is still going strong and is, if anything, getting better. Last year’s double bill of unnamed works is now joined by a third which, running for a total of a little over 90 minutes makes for a satisfying but not over-padded evening of dance.Clark’s choreographic style has been pared down to its essence: his ballet roots are clear in the meticulous precision he demands of his dancers (all superb) and his focus on, fetishizing even of, the human body. The costumes in all three pieces are variations on a body-hugging theme, every muscle and contour of the six performers clear for all to see – beautiful bodies in motion. Throughout, the dancers remain impassive – it is their movement which carries the meaning, nothing else. Often they move in a weird, almost zombie-like trance, living sculptures which Clark’s unseen hand moulds into fascinating shapes, nowhere more so than in the third section when two pairings at one point indulge in mesmeric feats of counterbalance in which arms and legs take on a confused quality. Clark centres the body in a Classical Dance fashion, arms often in recognisably balletic shapes when not outstretched in V or inverted V shapes, palms flat; legs are treated much in the same vein, often raised straight-kneed in varying directions. The Third Section appears centred on the pelvis, however, movement clearly emanating from the body’s core. Clark, as here, often chooses pop music, and is clever in laying often adagio movements over a more rapid rhythmic pulse. Of the three sections, I preferred the first to a selection of the Simon-and-Garfunkel-y Scritti Politti, burbling on melodically and matched by careful placement of feet (here as throughout bare) and hands. I found the choice of Public Image Ltd’s ‘Albatross’ less easy to swallow – music to commit suicide by. Charles Atlas’s lighting was masterful in focussing attention on the dancers themselves, every shift beautifully illuminated. Again in the Third Section, he was more playful with added use of intriguing video projection.This was a strong evening, a treat for Clark followers and novices alike, and impressive for the economy of means used to achieve consistently striking and ultimately satisfying effects. Clark understands the human body in a way unmatched by many of today’s choreographers.