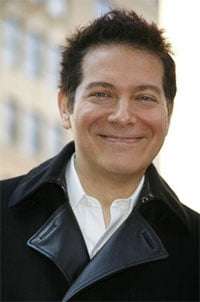 Having run the gamut of his favourite songwriters and recorded albums of songs by the likes of the Gershwins, Irving Berlin, Burton Lane, Jule Styne, Jerry Herman, Hugh Martin, Jimmy Webb and Jay Livingston & Ray Evans, singer-pianist and musical archivist Michael Feinstein now turns his attention to the songs made famous by Frank Sinatra.

In concerts and on a new album Feinstein has collected numbers that Sinatra sang and some that he never recorded. Feinstein and his big band under the direction of Bill Elliott, who also contributes some stunning arrangements, give them that big band feeling, recalling the years that Sinatra worked with Billy May and Nelson Riddle. Earlier this year Feinstein inaugurated a London branch of his Manhattan nightclub, Feinstein’s at Loew’s Regency. London now has Feinstein’s at the Shaw in beautiful downtown and up-and-coming King’s Cross. He has also embarked on his first UK tour to promote his new CD called “The Sinatra Project”. The album contains such standards as ‘Exactly like you’, ‘There’s a small hotel’, ‘Fools rush in’, ‘The song is you’, ‘Begin the beguine’ and ‘I’ve got a crush on you’. In the concerts he sings most of these numbers and there are further titles on the album. He was to have been joined by guest artist Diahann Carroll but she was unable to make the UK tour.

With Sinatra where do you start? There is so much material to choose from. As Feinstein explains, Frank kept reinventing himself every decade or so. There were the 1940s when he was the pop hero of the bobbysoxer brigade with the Tommy Dorsey Band. Later he sang romantic ballads under the direction of Axel Stordahl, the arranger-conductor at Columbia Records who is credited with bringing pop arrangements of songs into the modern age. Sinatra recorded hit singles for Columbia and RCA Victor between 1939 and 1952 that were later issued as compilation albums. “Sinatra Plus” is a double album on the Fontana label of singles from 1939 to 1952. “The Dorsey/Sinatra Sessions” on RCA Victor covered 1940 to 1942. “The Essential Frank Sinatra” was three LPs on CBS covering 1939-52. “In the Beginning, Frank Sinatra” covers 1943 to 1951 on CBS, and “Sinatra Souvenir” dates from 1944 to 1950 on Fontana. 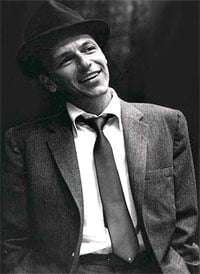 Sinatra made his first complete album in 1953 for Capitol Records, “Swing Easy”, arranged by Nelson Riddle, and Frank and Nelson produced another twenty albums with the most famous being “Songs for swingin’ lovers” in 1956, the cover of which was parodied by Peter Sellers for one of his comedy albums. The other great arranger in Sinatra’s career was Billy May with his big fat brass sound, here reproduced by Feinstein’s band with great similarity and brilliant musicianship.

Sinatra was with Capitol records from 1953 to 1962. Then came the Reprise years (1961 to 1984) with a mixture of arrangers such as Johnny Mandel, Don Costa, Neal Hefti, Gordon Jenkins and Quincy Jones, as well as Riddle and May too. Throughout every decade Sinatra performed the standards from the era of the Great American Songbook, along with newer songs, often written by Sammy Cahn. For every ‘The lady is a tramp’ or ‘Nice work if you can get it’ or ‘Pennies from heaven’ or ‘Autumn in New York’ there would be a ‘Strangers in the night’ or a ‘Send in the clowns’ or an ‘All the way’ or a ‘My way’: contemporary songs that were often some of his biggest hits.

Between 1939 and 1994 Frank Sinatra must have sung and swung some of the best songs ever written by his American compatriots (and others). He covered everybody from Cole Porter, Irving Berlin, the Gershwins, Rodgers & either Hart or Hammerstein, Harold Arlen, Johnny Mercer, Sammy Cahn, Jimmy Van Heusen, to Sondheim, Jimmy Webb, Stevie Wonder, Jacques Brel and Simon & Garfunkel.

In his show Michael Feinstein can give but a taste of what Sinatra was all about. He does affecting versions of ‘The lady is a tramp’, ‘I thought about you’, ‘My romance’ and ‘There’s a small hotel’. Many of the songs use the sound of the big bands in Nelson Riddle and Billy May style. Feinstein has the art of the band singer down to a tee and yet he can also be just as brilliant sitting alone at the piano accompanying himself. It’s always good to hear songs such as ‘I’ve got a crush on you’, ‘Begin the beguine’, ‘It’s all right by me’ and ‘Time after time’, the Jule Styne/Sammy Cahn number that is so moving despite its basic simplicity. And great Cole Porter interpreter that Feinstein is, he brings new life and some rarely heard lyrics to Porter’s ‘At long last love’.

Songs were written for Sinatra but not recorded. Feinstein includes one such number by John Williams and Alan and Marilyn Bergman, called ‘The same hello’, a soft and sentimental number that is so good, one wonders why it got away. Interspersed with the songs are stories about Sinatra and how Feinstein came to meet him. It’s a pleasant evening and a fitting tribute to arguably the greatest male singer of popular songs in the twentieth century – the female equivalent being Ella Fitzgerald. Both performers had that distinctive and enviable way of singing in a conversational style, as if this heightened form of expression were the most natural thing in the world. And to them it was. We will never see or hear their like again.