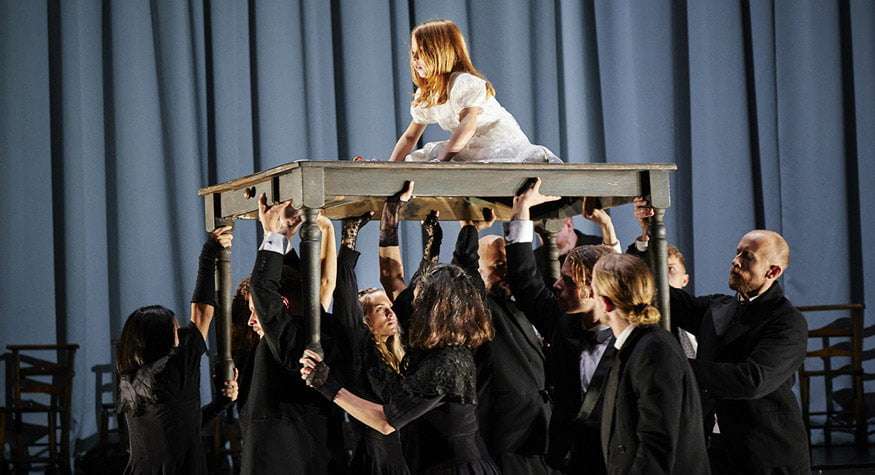 With Mám, his latest show at the Sadler’s Wells, Michael Keegan Dolan confirms not only his undimmed powers of choreographic and theatrical invention but also that the direction he has taken with his House of Dance (Teaċ Daṁsa) is most definitely the right one. In eighty minutes of music and movement, he presents a multi-layered, deliberately narratively opaque show which is so imbued with essential ‘irishness’ that the smell of peat which pervades the auditorium before its beginning is almost superfluous.

Mám (a gaelic word with multiple meanings – an obligation, a yoke, a handful of goodies or a mountain pass) is set in what reminds one of a village hall, with a raised stage and curtain at the back and is not a little reminiscent of the works of the late Pina Bausch, whose explorations of the individual in a community, unfiltered human emotions, time and the deeper, darker aspects of existence are all present here. It is all a little more light-hearted than the teutonically agonised Bausch, and Keegan Dolan is nothing if not a showman, creating coup after coup de théâtre, scenically, musically and in terms of movement.

What actually goes on is unclear, but the work opens with a little girl in her white communion outfit lying on a table, looked down upon by a seated man with a ram’s head; the devil perhaps. Twelve dancers are revealed in mourning dress, all black lace and ties, so what follows may well be a wake but, as the show progresses, they and the resurrected girl slowly divest themselves of the sartorial trappings of social convention to finish with bare feet, loose hair and plain outfits. The little girl often looks on as the adults cavort, laugh, scream, dance and kiss but sometimes she interacts with them, and the final scene which evokes the fierce winds and the raging seas of Ireland brings us to the essence of that country, the fundamental elements which have shaped it and its people, which all leads this reviewer to believe that Mám takes us on a journey back in time. 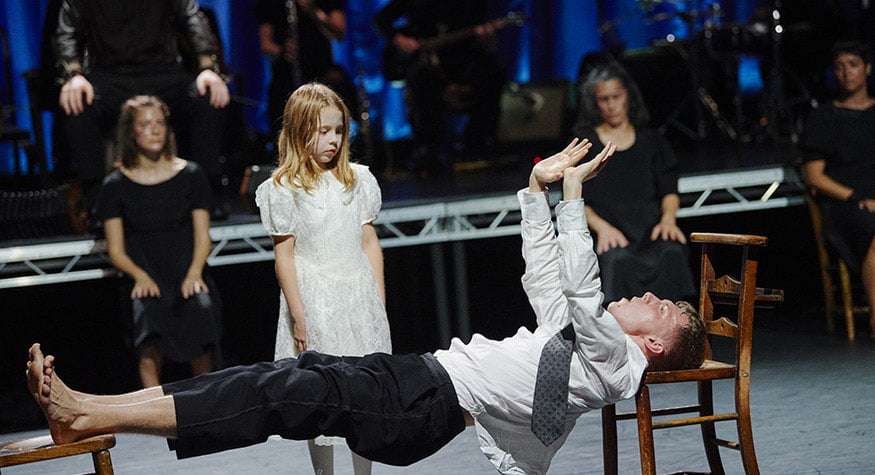 Keegan Dolan certainly works his performers hard in a long series of dances which convey a multitude of moods and emotions, desires and sorrows but which, despite their superficial randomness, are finely crafted and expertly judged, alternating wild, even fierce movements with episodes of quiet. The overall impression is, however, one of motion, the twelve rarely still, their vital force seeming to bubble within them at all times. Social dance, contemporary, folky, ethnic and vernacular movement all meld in this work to produce a panoply of effects, the eye and the mind assailed by striking image after image, the whole enterprise assuming a breathless, almost desperate quality.

Cormac Begley, seated centre front on the raised back stage is a master of every conceivable concertina (he uses bass, baritone, treble and piccolo versions throughout) and sets the pace with his maniacally virtuoso playing. Later ‘scenes’ reveal ‘s t a r g a z e’, a German orchestral collective whose zany sound combinations and undeniable musical ability bring a skew-whiff band sound to the bizarre proceedings, playing for all their worth at this wake at the edge of time.