This performance was part of the celebrations at The National Gallery to mark the 500th-anniversary of the unveiling of the Sistine Chapel. Michelangelo’s verses are just as distinctive as his contributions to sculpture, architecture and painting – the archetypal Renaissance man. 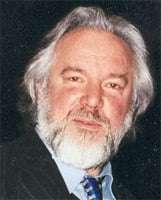 John Tomlinson presented the songs in the ‘person’ of Michelangelo. He wore appropriate robes and ‘read’ the poems from sheets of paper. This quasi-dramatic presentation was highly engaging and effective. He was sometimes seated at a table, as if pondering his thoughts, whilst at others paced around the stage.

The recital began with an oddity. Britten’s cycle was the first he wrote (in 1940) for Peter Pears, a tenor, and so the downward transposition (a fourth, I believe) may have caught those familiar with the work by surprise. As it happens, Tomlinson’s delivery was completely successful in its own right and shone a new light on the music and Britten’s word-setting. This was, necessarily, a more muscular, forceful approach to the work than that taken by most tenors, whether in the majestic opening, or in quieter or more agitated musings. David Owen Norris was an equally full-blooded interpreter of the challenging piano part; as a duo, he and Tomlinson were as one. One slight curiosity – Norris ‘spread’ the chords at the beginning of ‘Sonetto XXX’; this is not indicated in the score. 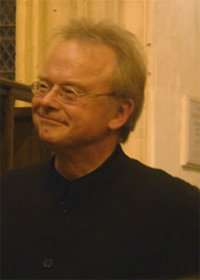 The three settings of Michelangelo by Hugo Wolf were also most eloquently delivered. The sense of resignation in the second of them was very affecting, and the sudden switch to the major halfway through a thoroughly touching moment.The somewhat allusive quality of the texts is unerringly matched by Wolf’s setting of them, and Tomlinson and Norris successfully conveyed their enigmatic atmosphere.

Shostakovich’s Suite on verses of Michelangelo is one of his very last works and, as such, has an air of bitterness and foreboding about it. The programme note referred to the similarity of structure (11 sections) to that of the composer’s final symphony, the Fifteenth. This must have been an unfortunate typo as it is the Fourteenth which has eleven movements, with comparably shadowy settings of verses by a variety of poets.

The cycle was given an intense reading, with singer and pianist delving into Shostakovich’s darker side, but without ever becoming overly lugubrious or monotonous. Tomlinson’s relishing of the Russian translations was gratifying in itself, as were the sometimes mercurial changes of mood – matched, as ever, by Norris’s pianism. The final setting – ‘Immortality’ (the titles are the composer’s own) – finds Shostakovich in puckish, almost playful, mood – in itself almost as disconcerting as much of the weightier music which precedes it.

Divesting himself of his robes, Tomlinson offered an encore – ‘Whither must I wander?’ from Ralph Vaughan Williams’s Songs of Travel. It was gratifying to hear this given in such a red-blooded manner; not always the case with singers of English song. It completed a very satisfying evening from a notable partnership.