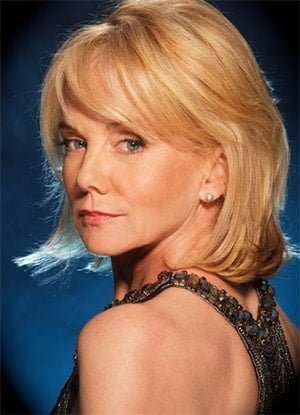 Linda Purl has had an extensive show-business career, with roles in television shows such as Homeland, Happy Days (as Fonzie’s girlfriend) and Murder, She Wrote – plus Broadway appearances in the musicals The Adventures of Tom Sawyer (as Aunt Polly) and a 1980 revival of Grease, in which she played Sandy. Purl was born to a theatrical family (her grandmother was a founding member of Actors’ Equity in 1913) and she ran her International Theatre project. She has also found time to establish a career as a singer and cabaret performer. This is her first appearance in the UK. A striking blonde who immediately establishes a warm rapport with the audience, Purl has chosen a grand programme of songs, most from the 1930s, when the nightclub era was at its height. She also evokes those great days from a little later, when every month there would be LPs from Peggy Lee, Jeri Southern, Carmen McRae, Kay Starr or Jo Stafford. Though reminiscent of these singers, Purl does not sound like any of them, but allies their superb intonation, phrasing and melodic purity with her own timbre. She flirts with jazz, does a little scatting and her fine pianist, Barry Green, gets in some solos.

Purl adopts a simpler approach for the great ballads which, with one exception, fare beautifully. The exemption is Vernon Duke’s gorgeous ‘Autumn in New York’ – after a beautiful rendition of the song’s verse, Purl launches into the chorus with “Autumn in New York / Why does it seem so enchanting?” … the word should be “inviting”, for the next line ends “It spells the thrill of first-nighting”, which no longer rhymes. This may seem nit-picking, but the great songwriters of the last century left us a wonderful legacy that displays their great craftsmanship, inspiration and hard work, and it should be respected.

Happily, Purl does complete justice (along with the welcome verses) to such ballads as Leo Robin & Ralph Rainger’s ‘Easy living’, Kurt Weill & Ira Gershwin’s ‘My ship’, ‘Rodgers & Hart’s ‘My romance’ and a lesser-known Vernon Duke & Ira Gershwin number, ‘Spring again’, first sung by Kenny Baker in the film Goldwyn Follies (1938). Breezier songs include ‘Them there eyes’ and the cute Harry Warren-Billy Rose confection, ‘Cheerful little earful’. Purl has great fun with Rodgers & Hammerstein’s ‘Shall we dance?’, giving it a rousing treatment backed by the energetic bongo-playing of Darwin Merchant: heard as never before, it was one of the evening’s showstoppers.

Between numbers, Purl shares some facts about her colourful life. As a child she spent ten years in Japan and one of her first stage appearances was as Helen Keller in a Tokyo production of The Miracle Worker. She happened to meet the Dalai Lama, her main memory of the encounter being that he wore “a stunning gold watch by Rolex”. All too soon Purl reaches her penultimate number, Billy Reid’s ‘It’s a pity to say goodnight’, followed by a beautifully moody interpretation of Henry Nemo’s ‘’Tis Autumn’, rounding off a highly satisfying evening.