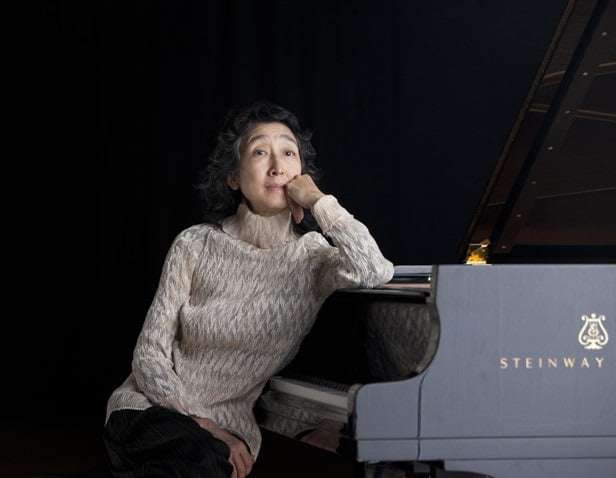 Mitsuko Uchida, who turns seventy just before Christmas, is halfway through her international Schubert tour, and her powers of insight, energy and intelligence are undiminished. Her core repertoire is Bach and the later Viennese masters – not Haydn, alas, whose music you’d have thought a very good fit for her brand of spontaneity and wit – but it is in Schubert where she scores, merging her and Schubert’s musical identities with uncontrived empathy and directness. To my mind her performance of the final Sonata, D960, was, even by her elevated standard, a miraculous achievement.

We all meet artists and their interpretations halfway with our expectations, but, in Schubert in particular, Uchida confounds this with her unfailingly fresh and re-creative judgement of his dovetailing of event and lyricism, and in matters of volume, colour and rubato she has developed an exquisitely subtle process of give and take. Her fortissimos are substantial, certainly, but they never sound pumped up, and her quiet playing has a core of singing intensity. She is also very easy on the sustaining pedal, so that Schubert’s harmonies and those vital harmonic shifts emerge in all their uncompromised clarity. The element of her playing that made its mark so strongly in this recital was the artistry with which she established foreground and background, essential for grasping the shadows that flicker through the music.

Compared with what was to come after the interval, the twenty-year-old Schubert’s Sonata D537 (in A-minor, a key that Mendelssohn also reserved for his most unstable music) is packed with event, and Uchida emphasised the first movement’s urgent contrasts with a pressured tempo. Moreover, for a pianist who can make difficult things seem easy, her playing here looked effortful, which suited the movement’s bold oddities of form and harmony, and the way she slightly darkened and thickened the exposition repeat set the tone for the extremely volatile development. The much simpler middle movement showed Uchida’s faultless intuition at moving between the music’s layers, which combined with her spectral, veiled tone yielded results that could have been straight out of Mahler.

In the two movements Schubert completed of his Sonata in C, D840, the so-called ‘Reliquie’, Uchida gave the impression of barely imposing herself on the music, which worked marvellously for the first movement’s maze of false starts and dead ends, which at the last minute find their way back to the home key. She was just as in-tune with the struggle of contrasts – along the lines of what Beethoven does in the slow movement of his G-major Piano Concerto – except that Uchida here made it clear that matters, like the Sonata, were unresolved.

There is a finish and a fastidiousness to Uchida’s style that never sounds overworked, and it served D960 sublimely well in playing that gathered veils of secrecy in the first movement. She has always given the bass trills with special significance, but here they became like a separate organism, cajoling and guiding the music into accepting boundaries. As in D537, but on a much broader canvas, she slanted the repeat to anticipate the chasm of the development as much as the stealth of the recapitulation. Uchida then allowed time to stand still in the slow movement, reducing the falling phrases and bell-like harmonies into the essence of grief and loss. Here, though, there was resolution, an eventual move to the major so quiet you felt rather than heard it, and just about supporting its weight of meaning. At the end of this great performance, there was a spontaneous and generous standing ovation.