Monteverdi
Vespers of the Blessed Virgin (1610) 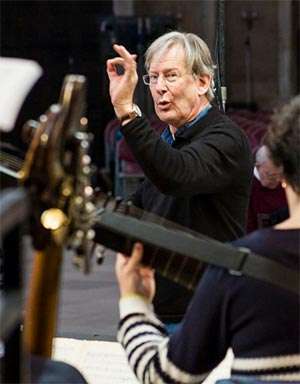 Exactly fifty years to the day, when a young John Eliot Gardiner (then an undergraduate at King’s College) conducted a newly formed ensemble in a performance of Monteverdi’s Vespers, here we were back in the very same location for this golden anniversary concert of the celebrated Monteverdi Choir. At that time the vespers was infrequently heard, and it is a mark of how far the musical world has come, not least through the achievements of Gardiner with his ensembles, that it is now commonplace to observe the Vespers as constituting one of the peaks of Western music.

The rationalised Perpendicular Gothic form of King’s College Chapel is a far cry from the mystical confusion of coloured marbles, stones, arches and domes that comprise the Basilica of St Mark’s in Venice (with which the Vespers is usually associated) though it served as a formidable backdrop. The Chapel is not as spatially complex as the Basilica, but Gardiner exploited its dimensions effectively and as much as possible. The choral and instrumental forces placed antiphonally on either side of the passage through the screen created something of the effect of cori spezzati. Nicholas Mulroy and Gareth Treseder were elevated behind the two choirs at extreme sides for the solos in ‘Duo Seraphim’, to call out “Sanctus, sanctus, sanctus” to each other (though it was a shame that Treseder’s declamations tended to bellow and so did not ideally match Mulroy’s). 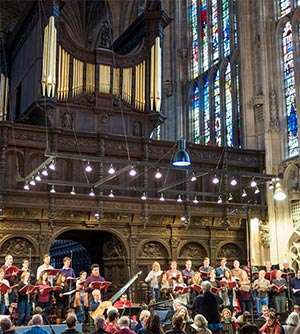 The King’s choristers sang some of the soprano lines in the final ‘Magnificat’ (the version in seven choral parts) from the west end of the chapel (that is, behind the audience) whilst occasionally a cantor delivered some solo lines invisibly, behind the screen, for instance the “Gloria Patri” of the ‘Dixit Dominus’, or Treseder’s more hauntingly sonorous echoes in ‘Audi coelum’. The incantation opening the whole work – “Deus in adiutorium” – was delivered powerfully, in full view, like a call to arms.

Simply as theatrical effects these were spine-tingling, enacting an impression of the divine coming down to earth. But they were allied to the highly persuasive musical realisation that has come to be a consistent and instantly recognisable feature of the Monteverdi Choir’s approach, as may be borne out by comparison with its performances of this work on DVD from St Mark’s in 1989 and at the Proms in 2010. As on those occasions, at King’s College there was often a very robust manner in the more monumental choral sections, such as the dramatic and ebullient rhythms in ‘Lauda Jerusalem’, the resounding climax in the “Gloria Patri” of ‘Laetatus sum’ and even a thunderous, bellicose attack on “in splendoribus sanctorum” and “Sicut erat” in the ‘Dixit Dominus’. Here the volume of sound overwhelmed the English Baroque Soloists, but usually its members held their own otherwise.

In his programme notes, Sir John Eliot described ‘Pulchra es’ as a Sapphic love-duet for two sopranos and probably no better word could describe the effect of Emanuela Galli and Silvia Frigato’s singing – especially in respect of the latter’s painfully sensuous plea “turn your eyes away from me, for they have overcome me”. The emotional temperature was cooled later by the boy Choristers’ seamless and innocent reiterations of “Sancta Maria, ora pro nobis” in the ‘Sonata’, addressed to the Virgin directly.

Perhaps most impressive was Gardiner’s ability to forge all these moments into a sustained dramatic unity, despite not connecting up the movements with any plainchants. This had to do with something different than merely looking for the ‘correct’ way to perform any individual section but rather binding each one to another with the utmost emotional cogency. Like the religious experience to which the work bears witness, the performance held expectation and fulfilment in magnificent tension.