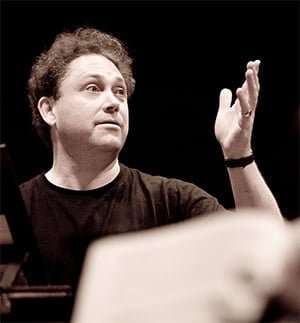 At the outset of the season which sees the marking of its 40th-anniversary, the Academy of Ancient Music presented a more or less fully staged performance of the first great opera – Claudio Monteverdi’s L’Orfeo – which, among its many aspects, can be regarded as a celebration of music. Orpha Phelan set the action in contemporary times, though playing down to some extent those senses in which this favola in musica revels in the sheer joy of music-making and the emotions it stirs.

The drama took place in a mafia-like world, apparently inspired by the television series The Sopranos, in which Orfeo, belonging to one clan, is about to wed Euridice, who comes from another. The performance started before any music was struck up, with the chorus members strutting among the audience in the foyer, acting and dressed as the guests at a vulgarly ostentatious ‘celeb’ wedding; sipping colourful cocktails also, they perhaps called to mind the world evoked by another recent TV series, Footballers’ Wives. Richard Egarr was milling around on the stage rather menacingly, wearing dark glasses, so too some of the members of the orchestra. With the libretto unchanged, some discrepancies arose between it and Phelan’s conception, though fewer than might be thought, and so it worked reasonably well. 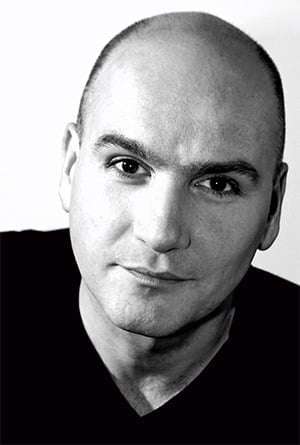 Certainly this offered a compelling slant on the resonances which this timeless myth continues to stimulate. Orfeo’s descent into Hades became a metaphor for his own psychological disintegration after the tragedy of Euridice’s death, though this required the alteration of Plutone’s and Proserpina’s roles to mere bartenders, whose only consolation to Orfeo in the face of his initial refusal to accept this reality is to offer temporary relief in alcohol. The ensuing scene which purports to occur in the Underworld remained dramatically credible in this context as Orfeo’s unhinged and desperate attempt, in his mind, to convince himself that Euridice may yet have escaped her fate, a notion which the cold force of reason tells him, and us, is impossible.

Therefore, this perhaps came close to realising for modern minds the truth implied by Plutone’s condition on Orfeo in the original myth that he must not look back at Euridice – an impossibly tantalising command which must inevitably result in failure, and denotes the unalterable truth that no mortal can be brought back once he or she has passed through the gateway of death. John Mark Ainsley’s rendition here, as he staggered about in a drunken stupor, had all the poignancy of Lear’s incredulous “Howl, howl, howl, howl!” as he carries the dead body of Cordelia. 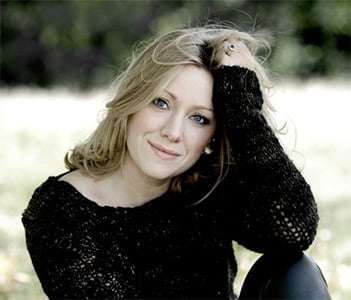 The reinterpretation largely entailed the stripping away of the original’s supernatural elements. Apollo became simply Orfeo’s godfather, while Caronte was understood as a pathologist who had the grim duty of presenting Euridice’s body to Orfeo. The presence of a clergyman at the would-be marriage in Act One, and the promise of a resolution in eternal life did keep alive some notion of a non-material dimension, though it was perhaps something of a curiosity that the audience saw Euridice walk to and from the morgue table on which she is presented (as dead) to Orfeo by Caronte in Act Three. The notion of hell being in Orfeo’s mind meant that in effect his musical power over nature received much less emphasis. Indeed that could be taken as just a vain conceit of his, though his berating of nature in Act Five – that it can only echo his laments ineffectually – was all the more moving. Most symptomatic of the reduction (one might be tempted to say traduction) of music’s role in this staging was the reinterpretation of La Musica as a wedding singer – something more akin to the crooning of the latest pop classic that passes as entertainment in the modern format of showy marriage celebrations, perceptively satirised in this production, rather than presaging one of the opera’s central themes.

Dramatically and musically, Ainsley was certainly at the centre of things. In Phelan’s vision of the work, Orfeo is a nervous bridegroom, whose initial uncertainty about Euridice’s love stems from his own flaw in that he regards her as a trophy-wife at first. Particularly in Act One Ainsley adopted a brittle, rather than lyrical, tone, though at other times he showed a more macho swagger and bravado. Covering a wide array of emotions and states of mind, his performance was striking in realising all the facets of Orfeo’s character, buffeted by fate and circumstance, especially as he becomes mentally unstable in Act Three. Sophie Bevan had all too little to sing as Euridice, but what we heard had the personality of a tragically innocent woman, who is just as much the victim of circumstances as Orfeo.

Given the downgrading of the work’s setting from the monumental and mythological, to something more worldly and overtly human, it was appropriate, and surely deliberate, that the other singers did not convey as much of a commanding attitude as would otherwise be expected. Their eloquence and fluency in delivering Monteverdi’s expressive quasi-recitative, and unforced ornamentation, allowed the drama to be expressed naturally. That said, Daniela Lehner might have had more presence musically, even if simply as a wedding singer, since she was still required to hold the attention of the guests in the ‘Prologue’. As the messenger, Katherine Manley did not establish anxiety and tension all at once on her entrance, but quietly and intensely unfolded the tragedy of the news she brought, before then cursing herself as the conveyer of it. She and Dawid Kimberg, as Proserpina and Plutone respectively, were calm, even distant, plausibly conveying the indifference of these keepers of the Underworld to the operation of nature’s implacable laws over the affairs of mortals. In keeping with Caronte’s updated role as a pathologist, Paul Gerimon was similarly cool, though preserving just enough of the sardonic swing of the original infernal boatman’s song to hint at a cruel mocking of Orfeo’s suffering.

Whatever the constraints of the production, the AAM remained fully committed to the vivacity of Monteverdi’s music, right from the insistent and triumphant tone of the opening ‘Toccata’. The ritornelli and interpolated dances do not always bear any relation to the surrounding drama, but the AAM brought them fully to life without breaking the score’s coherent flow overall. In contrast, the choir’s numbers sometimes sounded a little sullen, but the singers’ ensemble was intact and precise. Altogether this was an unconventional approach to L’Orfeo, but the result was rewarding.