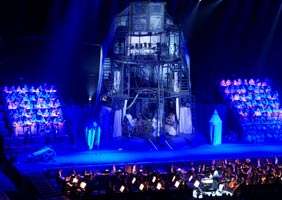 Monumental Opera here presented Franz Abraham’s smash-hit production of Carl Orff’s 1937 “Carmina Burana”, a staged cantata in three parts. Since its launch in 1995 this show has toured extensively; this performance attracted 11,000 people to The O2 Arena (formerly the Millennium Dome)! A staged cantata rather than an opera, “Carmina burana” consists of a succession of tableux illustrating how fortune governs the affairs of man. Given its contemporary popularity it is surprising to note that the work received its UK premiere in London as late as January 1960.

The central element of this production is a large tower in which the wheel of life is turning, very similar to the staging for the first performance of this work. Characters from the devil to men and women of the Middle Age populate it; the latter’s comings-and-goings being the drama for the story. With The O2 Arena in darkness, a bell tolled ominously as the choir entered through the central arena, alternate members carrying a flaming torch and all dressed in the garb of mediaeval-monks. It then became apparent with the cry of “O Fortuna” that the problems of sound reproduction that affected the first half of the concert would be even worse here. The Arena is big but I am sure the Royal Philharmonic could have been filled out with more players and the choir could certainly have been expanded (it looked like there were fewer than 100 singers) so as to cope with this space. 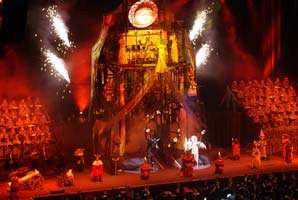 The effect of the poor, overbearing amplification meant that the thrill and subtlety of Orff’s orchestration were wholly lost, any titillation and raw energy extinguished by the loudspeakers. Even being sat close to the orchestra did not allow for its sound to be audible above the speakers, which were far above the performance area. The delicacy of the percussion in “Ecce gratum” was absent and “Floret silva nobilis” failed to burgeon, with no sense of the mushrooming of Spring.

It is almost pointless to comment on the soloists because, again, what was heard was transmitted though the speakers and emasculated their range. Diction was well-honed; an admirable trait found in the choirs, too, though having such a small youth choir further undermined the musical aspects. 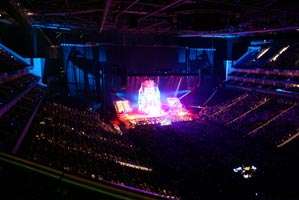 As for the spectacle, which is, probably, what this Monumental Opera endeavour is all about – its next venture is the music of the “Star Wars” films and there is “Carmen” and “Aida” as well as “Ben-Hur, LIVE”! This enactment of “Carmina burana” worked well, though the fireworks were damp squibs. Some of the poems’ subject matter is salacious and the production did not shy away from this, with naked women and men writhing and simulating carnal pleasures. For such a large space as The O2 Arena, it was surprising that the show felt cramped, it being confined to a small area and failing to evoke the reckless nature of Man.

Opening the evening was a “prelude” of, apparently, “Verdi’s greatest achievements”. That is a trite way to advertise but at least it gave the chorus a chance to show off (no distracting ‘spectacle’ here) and, in the ‘Triumphal March’ from “Aida”, the contribution of the trumpets being startlingly good. Throughout, Walter Haupt, who has headed this “Carmina burana” from the start, led the RPO with determined flair. He displayed a grasp of the music that almost defied the hindrance of the performing conditions but without finding its sparkle or ribaldry.

The seat I was allocated had a dreadful view of the stage. This could be solved easily by staggering the seating in zig-zag fashion; otherwise these seats should be sold with the caveat of “obscured view”.

As an introduction to staged music, opera that is, then Monumental Opera’s venture is to be applauded. I would urge those seeking ‘more’ to head to the nearest Opera House, where the music-making is unadulterated and the singing enjoys a full dynamic range.