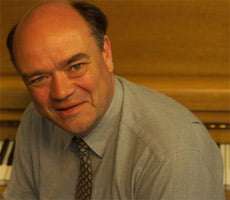 In his welcome from the stage, Sir Nicholas Kenyon (MD of the Barbican Centre) said he was happy to take the ‘blame’ for the founding of the Barbican Young Orchestra but that he was equally happy to pass responsibility to Sir Colin Davis. After all, it was Sir Colin who had said that he wanted to conduct “really young children”. Thus the Barbican Centre, the London Symphony Orchestra and the Guildhall School of Music got together and collaborated with various music services throughout the London boroughs as well as numerous schools and teachers. Hundreds of children (aged 9 to 14) were auditioned and those successful have enjoyed coaching by members of the LSO before what seems to have been a particularly hard-working week with Sir Colin leading up to this concert.

Uniformed in branded green T-shirts and black trousers (or skirts) the members of the reduced if still sizeable string section entered the auditorium with confidence and remained remarkably secure for the demands of the music. Sir Colin – lucid in technique, benevolent in body language – made no concessions to tempo in the outer movements (and even took the second repeat in the finale), both of which fizzed along, with the central one being generously lyrical (a manic photographer intruding here, click … click … click). This was a performance of real expertise and commitment, musically graceful, too. There was the occasional blooper but the ensemble-playing was exacting.

There followed a protracted platform set-up for “119 Ways”, a genuinely unique project in that it involved “making up music”, to quote Matthew Barley’s spoken introduction. Given under the umbrella of Barley’s “Between The Notes” initiative, which brings together “diverse musical experiences”, Barley (co-directing and playing his cello) together with professionals such as tuba-player Oren Marshall and trumpeters Bruce Nockles and Ben Edwards, gathered members of the Barbican Young Orchestra (saxophones, piano, guitar, brass, winds and strings, some players doubling on a variety of drums) for several days of musical participation and invention, discussing their ideas and refining them on a committee basis into something not written down but developed collaboratively.

“119 Ways” refers to the number of entrances/exits into and out-of the Barbican Centre. (Fact!) The final musical result – equating to 1950s/1960s experimentation and ‘third stream’ jazz, and involving the spoken word and some moody lighting – came and went; and never to be heard again. But what a tribute to all those involved that the 20 minutes’ playing-time gave the impression of having been notated, for the result seemed fully finished and thought through and which also reported the power of memory and these participants’ capability for teamwork. 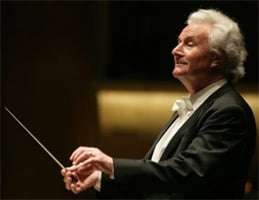 Colin Davis returned for Dvořák’s Eighth Symphony, the platform now packed with young musicians, not least 69 string-players (18/17/14/12/8). The only deficiency (a surprising one) was the lack of ‘well-tempered’ tuning across winds, brass and strings. Otherwise this was a ‘real’ orchestra – playing with discipline, commitment, assurance and relish, so it is perhaps invidious to single out Merlin Jones’s timpani-playing (accurate and variegated) and the four clarinettists. As well as noting the excellence of the youngsters’ response to Sir Colin, one was able to focus on his interpretation and the performance itself – which must surely be the biggest compliment.

Davis led an exhilarating account, the opening bars, so often treated as a slow introduction, fully up to the Allegro con brio marking, this opening movement given in one breath – with exuberance, impetuosity and, indeed, Slavonic fire. The Adagio was arguably too restless but its inherent tragedy was movingly revealed in the latter stages and then danced away by the lilt of the ensuing Allegretto grazioso and the stamping fervour of the finale (horn trills blazing through and with David Westcombe negotiating the tricky flute solo with aplomb).

The unattended bass drum, triangle and pair of cymbals had signalled an encore from the off. There was a one-in-sixteen chance of it being a Slavonic Dance … so, the ‘Alla marcia’ from Sibelius’s Karelia Suite, given with a real spring in its step, made for a rousing conclusion to a memorable and heartening evening! At the end, Sir Colin (who has a terrific track-record for inspiring young musicians) linked arms with the BYO’s leader, Savitri Grier, and escorted her off with a gentlemanly flourish.