Having explored so many of Mozart’s lesser-known works during its remarkable forty-four year history, with occasional diversions into the music of his contemporaries and successors, the Mostly Mozart Festival occasionally returns to more familiar pieces that are the touchstone of the composer’s genius. Osmo Vänskä chose three such works: the only two Mozart symphonies in a minor key and one of only two of his piano concertos in that mode (the other being No.24 in C minor, K491).

Although both of the symphonies share a common key, their difference in temperament may relate to when they were written. The earlier of the two was written during Mozart’s late teens, its slashing intensity and Sturm und Drang furor characteristic of youthful adolescence; while the later symphony, which Mozart composed when he was in his early-thirties, is more mature in temperament, though with some occasional disquieting moments. The D minor Piano Concerto’s dark side presages “Don Giovanni” by only two years.

The program opened with the so-called “Little G minor” symphony. Vänskä attacked the first movement’s principal theme with vigorous intensity, urging his players to strike each entrance forcefully. When the oboe enters with the lyrical second theme, it was as if the music came to a virtual standstill, the accompaniment fading into the shadows so as to provide a night-day contrast with the first theme and permit the oboist to wax expressive. Antiphonal violins provide a ‘stereophonic’ dimension to phrases shifting between the Firsts and Seconds. This placement also works well in the other G minor symphony. Conducting the Andante without a baton enabled Vänskä to naturally express its charm and delicacy, slightly drawing out appoggiaturas to enhance the feeling of longing and sadness, while letting the music breathe naturally, and capturing the dance-like character of the main theme by a slight emphasis on off-beat accents. Willful accents are also noticeable in the Minuet; woodwinds’ light, perky treatment of the Trio was quite charming. 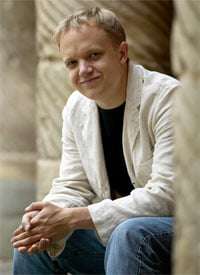 The highlight of the evening was the superb performance of the D minor Piano Concerto by Antti Siirala. What is most impressive about the Finn’s playing is his deftness, delicacy and sensitive expressivity in lyrical passages. Siirala does not engage in physical gestures to express the emotions the music conveys to him; he lets his hands do it all. That is not to suggest that the interpretative orientation of pianist and conductor is in any way devoid of emotion, for they both approach this work in a romantic vein, for example, juxtaposing the mysterious sotto voce opening of the first movement with explosive outbursts of driving rhythms carried on the wings of long stretches of figuration supplied by the piano. In fact, Siirala’s graceful lyricism perfectly complemented Vänskä’s expressive manner in the central ‘Romanze’; and the energetic intensity of the finale engendered by the conductor worked splendidly as a counterfoil to the pianist’s engaging sensitivity in lyrical passages.

After intermission, the program concluded with the G minor Symphony, K550. Vänskä’s straightforward approach was romantic in conception but not hampered by unidiomatic affectations or unduly distended inflections, remaining stylistically within the gambit of late classicism. Inner voices, such as the clarinet descant climax of the development in the first movement, came through without being over-balanced. A slightly brisk opening tempo for the Andante movement soon found its way to a more comfortable pace without slackening too noticeably or causing the musical flow to flag. Vänskä’s lively demeanor on the podium energized a bouncy treatment of the Minuet that contrasted with a simple, yet lilting reading of the Trio. The finale exuded the energetic uplift that characterized much of the entire performance of this ever-popular symphony.