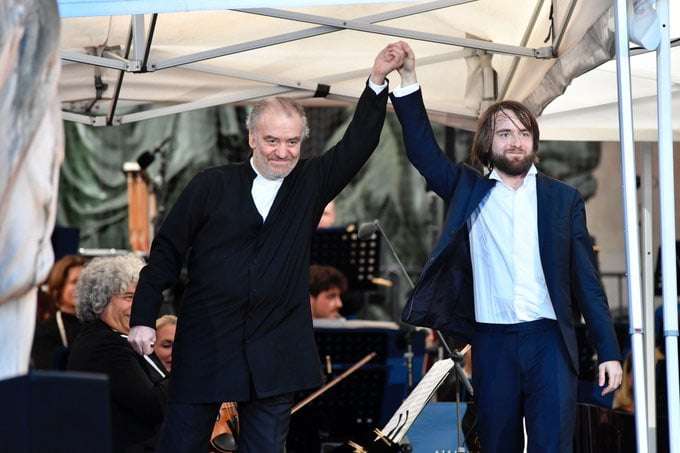 The Munich Philharmonic’s annual open-air summer concert – this year an affair in three flats: C-minor, E-flat – got the crowd going with Beethoven at the height of the Napoleonic Wars. An event rather more seriously weighted than Dudamel’s romp with the Vienna Philharmonic last month. Munich’s early-nineteenth-century Odeonplatz is a place of politics and parade. The canopied concert stage, under a panoply of lighting girders, is within the Feldherrnhalle, a monumental Florentine-style loggia commissioned by Ludwig I of Bavaria, a man with an eye for beauty and beautiful women. Facing outwards, two imposing ‘Medici’ lions flank the central arch. To the left is the twin-towered, rococo-style Dominican Theatinerkirche St Kajetan. Contrasting the airiness of Vienna’s Schönbrunn lawns, it’s very much a cityscape. But a striking example – a ready invitation for cameramen and inventive directors.

Concerts of this kind have a long tradition, in various guises reaching back centuries. They’re as good an arena as any for formative experiences. To the accompaniment of peacocks – raucous creatures – my earliest Brahms One, looking back, was at such an occasion, a 1959 Holland Park Sunday, deckchairs spread out before the bombed ruins of the old House, George Hurst conducting the LPO.

Some in this large Munich audience will no doubt have been chancing their first taste of Beethoven. So what did they get? A class orchestra at largely full throttle, cellos and double-basses at left back, Celibidache’s characterful former concertmaster, Lorenz Nasturica-Herschcowici, leading. Daniil Trifonov, bearded pianist of the hour. Valery Gergiev, generalissimo without baton, exchanging toothpick for white pencil. “Zeit für Muzik” went the banners. “Zeit für Extravaganz” went the broadcast, spectacular sound and romantically stereotyped visuals to the fore, sunset and cobalt blue sky panning to reds, purples and bronzed shadows, floodlit lions, menacing and defying, about to prowl the night.

In the Sixties and Seventies I used to spend hours scouring the musty record shops of Charing Cross, Great Marlborough Street and Notting Hill, seeking out Soviet performances of the Beethoven Symphonies for what they might tell us of other traditions of Beethoven-playing. Though scarce to find, those harshly engineered, poorly manufactured old Melodiya LPs yielded unexpected discoveries. Mravinsky and Barshai in particular. These days one has an easier time researching. But the unexpected can still lurk around the corner, albeit not always that interestingly. Neither Jurowski nor Vasily Petrenko has impressed that much in recent outings.

Gergiev’s Fifth yielded few revelations. Going with the mainstream flow, this was a big-band take big-band relayed, more old school than New Age enlightenment. That said, there was much to thrill. A couple of glitches aside (principally in the recapitulation of the Finale, external noises unsettling momentarily), what powered through most was rhythm and weight. All repeats. Driven tempos. Grandeur before melodrama. Apotheosis of the march. Two woodwind moments stood out. The oboe cadenza of the first movement, and a beautifully dolce bassoon echo at the start of the Più moto in the Andante. For the Finale, three similar but different speeds applied to the first subject, in the event convincing theatrically and physically engaged, fluidity notwithstanding: minim 77-92 (exposition), 76-86 (repeat), 68-90 (reprise). Long-held, drunk with spiralling glory, the paused C unison of the final bar thundered brazen and euphoric, Gergiev’s grizzled demeanour all but suggesting ecstasy. Mendelssohn’s Midsummer Night’s Dream ‘Scherzo’, lit in green, proved a curious choice of encore, orchestrally fleet-footed but temperamentally and stylistically misplaced.

Following a broad, tightly controlled Coriolan – the orchestra full-throated and eloquent, an epic poem unfolded in solemn tragedy – Trifonov strode on, ever so slightly mischievous in manner, to tackle the ‘Emperor’. Off he went, not quite together with Gergiev in the chordal pillars of the introduction, but athletically prepared for the journey. More clattered than chromed, con brio at a premium, the lyric passages deliberated and held back, the virtuoso octaves and chords worked hard, tending towards the bullish, the first movement dazzled in notes, but, arguably, ended up a little headlong in tempo and phrasing, falling short of its aristocratic undercurrents, the promise of the orchestra’s opening E-flat chording not delivered. Reprise-wise, the notorious chromatic run into bar 373 worked neatly enough (I once heard Rubinstein and Dorati break-down here, disastrously) but only because of Trifonov’s determination to accent it in groups of four semiquavers, left-hand conducting. Safe for all parties maybe but contrary to Beethoven’s seamless intention (his precise views on regular, irregular and free scaling get too often missed by pianists).

The opening entry of the Adagio, while a lesson in sustained evenness, paid insufficient attention to Beethoven’s slurs, depriving them of maximum expressive impact. The music went through the motions, yet the spirit seemed oddly static, personally detached even. Best was the Rondo, though telegraphing the pianissimo upbeat rather missed the point.

For an encore the Finale of the E-flat Sonata, Opus 31/3, was turned into a furious race for the post, at times scintillating – Trifonov’s left-hand can write a story – elsewhere breathlessly machined into an etude for Disney goblins on speed.