Academy of St Martin in the Fields
Tomo Keller (leader; soloist in Romance) 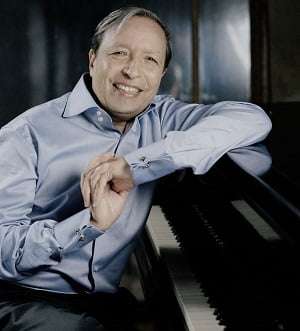 The final leg of Murray Perahia’s survey of Beethoven’s Piano Concertos, ending with the ‘Emperor’.

As has been remarked, Perahia, in his most recent expositions, has adopted a pared-down approach to the Concertos, confining himself to a paradigm that seems to come much more from historically informed performance, and this ‘Emperor’ was no exception. Changes in tempo there were, but managed subtly, with little over-emphasis of the Romantic (the pre-figuring of Brahms that can happen). Perhaps the most obvious demonstration of this was the modification, in three discrete steps, from the speed of the slow movement to that of the Finale. This was Beethoven, in his thirties, exploring new sonorities, and blazing the trail for Romanticism, if working within the Classical idiom.

Much of the light and shade in this account came from changes in volume – Perahia coaxing from the piano in the first movement the lightest of rippling passages against pizzicatos; or his thundering out of the rising and descending scales towards the end; and the hair-raising muffled tone that he achieved against the timpani in the Finale’s coda. There was some languor in the Adagio, but only as much as one felt Beethoven required from this most tender of creations.

The ASMF also produced some magnificent contrasts in dynamic, and responded well to Perahia’s direction. Tristan Fry’s hard-stick timpani gave the Concerto the sort of edge that one might have heard from the Hanover Band 1980s’ Beethoven performances, and the wind section – particularly the horns (there was a magical horn note at the reiteration of the opening fanfares of the first movement) – reminded listeners that it was Beethoven’s more-raw writing for winds that took him away from polite Classical form.

In the first half, there were performances at opposite ends of the interpretative spectrum. Given the F-major’s Romance these-you-have-loved status, it’s probably impossible to play this piece in any other way than to pluck at the heartstrings, and the band gave full rein to this, with Tomo Keller producing handfuls of sweetly swooping notes.

The account of the First Symphony was of another order altogether. Performed by nearly forty ASMF players (with the barest of nods now and again from Keller), it was the triumph of the evening. This was unpasteurised Beethoven, taken at a hefty lick and with plenty of youthful energy – full of sudden dynamic changes and perky rhythmic interjections from throaty brass and intrusive timpani. It wasn’t without elegance – ‘Papa’ Haydn was present in the Andante cantabile – but it demonstrated perfectly Beethoven’s restless need to break the mould, and provided a consummately performed reminder that the catalogue of great Beethoven Symphonies doesn’t begin with the ‘Eroica’.