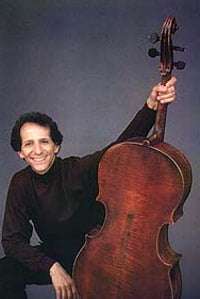 The gilded ceiling and marble fireplace in the 19th-century ballroom where cellist Colin Carr and pianist Thomas Sauer performed sits in marked contrast to the ultra-modern Silicon Valley in which it is located. Not far from the Music@Menlo Festival, under the bluer-than-blue Californian sky, are the world headquarters for such high-tech companies as Google and Apple.

The setting may have been incongruous, but there was absolutely nothing contradictory about the program itself, The Romantic Cello Sonata. The directors of the Music@Menlo Festival left this entirely up to Carr for this Carte Blanche concert, and he chose to present every single piece of cello and piano music written by Felix Mendelssohn, Johannes Brahms and Robert Schumann. It is really enough music for two recitals, and the organizers allowed for a 75–minute-long intermission to alleviate fatigue from both sides of the stage.

Carr took a distinct approach to each composer and, indeed, to each piece. In Mendelssohn’s First Cello Sonata, his sound was rich and mellow; for Schumann’s Adagio and Allegro, anxious and penetrating; and intense and chocolaty for Brahms’s First Cello Sonata. In every case, Carr made the cello seem inevitably suited for this romantic literature.

This was an ambitious program, particularly for the pianist, as Carr noted at the onset of the concert. The two musicians were perfectly in sync, whether Sauer was supporting Carr harmonically, echoing him melodically or taking his turn in the spotlight – he is both an energetic and a sensitive partner. 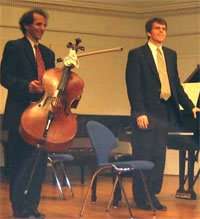 Mendelssohn’s First Sonata was a logical start to the program. Carr and Sauer reveled in the lyricism in the middle movement, and drew out the high drama in the finale. The opening of Schumann’s Adagio and Allegro has been referred to as a conversation between two lovers, and Carr and Sauer approached it with passion and collegiality.

The Bach-like theme of Mendelssohn’s Variations concertantes was perhaps a result of the composer’s obsession with “St Matthew Passion” at that time. Sauer’s light touch embodied the baroque nature of the work. The two musicians enjoyed clownish moments in a pizzicato passage and embraced the parade of characters passing through the variations: Keystone Cop, dastardly duo, angelic child, dashing hero.

Brahms’s First Cello Sonata closed the first half of this marathon, with the two galloping forward in the convulsing repeated patterns. Brahms’s late-Romantic ideal in the work was tempered by a Bach-like motif in the third movement, a fugal counterpoint in a Romantic context.

Refreshed by their lunch break, Carr and Sauer launched into the equally challenging second half, with renewed ardor, beginning with Mendelssohn’s Second Cello Sonata. Sauer lingered over the piano part in the sonata’s beautiful adagio, a harp-like introduction after which Carr poured out his heart in yet another lyrical passage. The jaunty theme of the playful finale was a quick contrast.

Their performance of Schumann’s Five Pieces in Folkstyle captured the dance elements of the work, evoking images of spritely peasants in leaf-colored costumes prancing about the village square. Brahms’s Second Cello Sonata was practically frenzied, especially in comparison to the serene Mendelssohn work that preceded it.

Even after four hours of music, the exhilarated audience demanded an encore, a gem from solo piano literature, a very tender rendition of ‘Träumerei’ (from Schumann’s Kinderszenen).